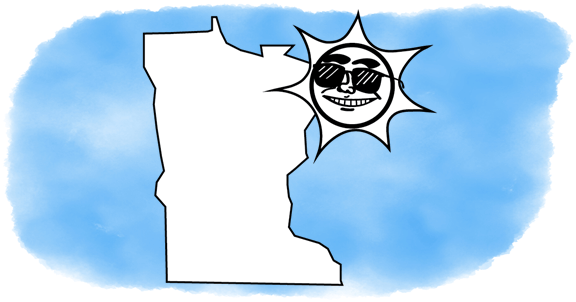 Going solar? Good call. It’s the right choice for your pocketbook and for the climate. If everyone in Minnesota used solar power, it would take 61 billion pounds of carbon out of the atmosphere every year—according to the EPA’s greenhouse gas calculator, that’s the equivalent of planting a forest that would cover nearly half of the state.

Solar power is a growing part of the energy mix in Minnesota. Nationally, the state ranks #34 in solar energy use.

The biggest advantage of solar energy? The cost—$0. For the average Minnesota household, generating all their own electricity with solar would save $1,167/year. Also, you’re doing a favor for the next generation. Instead of relying on CO2-spewing coal plants, which produce most of Minnesota’s electricity, you’ll be producing your own clean, renewable energy. In Minnesota, residential customers like you account for 22.5% of the state’s total energy consumption.

The disadvantages: The cost of installation. The average solar installation costs around $20,000. Incentives like the Made in Minnesota Solar Program, which gives homeowners up to a $2,500 rebate on installing solar, and the U.S. Residential Renewable Energy Tax Credit can bring the overall cost down. Also, in Minnesota, solar equipment is exempt from sales tax.

The average Minnesota family uses 27,000 watts of energy on an average day. And, on average, they’ll get 4 hours of sweet Minnesota sun each day. So, to get enough energy to keep the power running all night, they’ll need their solar power array to generate 6,750 watts of energy per hour while the sun’s out.

To figure out exactly what you’d need based on where you live in Minnesota—and how much money you’d save—use this solar savings calculator:

Minnesota has an ambitious solar policy—while wind has led renewables development so far, the state’s fossil fuel reliance and favorable policies like the Made in Minnesota program make the state a promising market for solar.

The state’s signature solar program, Made in Minnesota, offers financial incentives for homeowners, businesses and nonprofits who install solar equipment manufactured in the state.

Minnesota has a substantial renewable energy portfolio standard that mandates 10% of the state’s energy mix be solar by 2030.

Minnesota, like most states, mandates net metering. Net metering credits homeowners who install solar panels for the energy they generate—if they use it themselves, it’s deducted from their bill, if they send it back to the grid, they get paid for it.

In August 2016, Twin Cities developers announced plans to create three net zero neighborhoods in Minneapolis and St. Paul which will be powered mostly by solar.

In 2016, A major apartment rental company in the Twin Cities began installing solar arrays across its properties, including a 145 kW array at the CityVue apartments in Eagan.

In August 2016, the University of Minnesota announced plans to build several solar-powered greenhouses that will allow the university to grow crops in deep winter.

The Fond du Lac Band of Lake Superior Chippewa tribe completed a 1-megawatt solar farm in August 2016. The array is the largest in Minnesota.

In October 2016, the St. Cloud city council approved plans for a 1-megawatt solar garden in a local cemetery.

In October 2016, the Dakota Electric Association announced plans to build a 1-megawatt solar array to be built along Highway 61 in Marshan Township.

The Groom Room, a dog groomer and boarder in Hawley, is one of many rural Minnesota businesses that have installed solar panels.

In June 2017, the Bolton’s, the couple that built Bolton Bees, announced the installation of apiaries in Ramsey’s solar farm. The apiaries are an effort to save bees while reducing greenhouse gases.

In June 2017, the Aurora project was completed for Xcel Energy. The 100 MW solar energy facilities are located throughout Minnesota and owned by Enel Green Power North America.

In May 2017, NRG announced that their first solar projects connected to Minnesota’s Community Solar Garden were complete, together the solar array will provide 32 MW of solar energy.

Minnesota Solar Energy Industries Association (MnSEIA) is an active local chapter of the national SEIA. MnSEIA actively lobbies for pro-solar policies on the behalf of solar the solar industry and solar users.