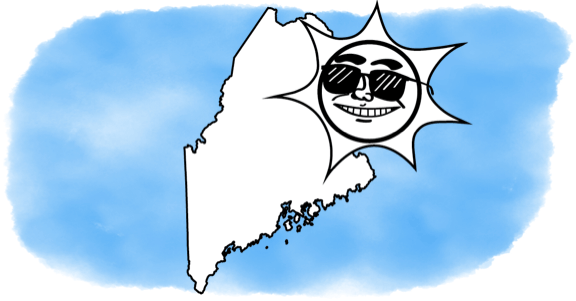 Going solar? Good call. It’s the right choice for your pocketbook and for the climate. If everyone in Maine used solar power, it would take 8 billion pounds of carbon out of the atmosphere every year—according to the EPA’s greenhouse gas calculator, that’s the equivalent of planting a forest that would cover 15% of the state.

Solar power is a growing part of the energy mix in Maine. Nationally, the state ranks #20 in solar energy use.

The biggest advantage of solar energy? The cost—$0. For the average Maine household, generating all their own electricity with solar would save $1,007/year. Also, you’re doing a favor for the next generation. Instead of relying on natural gas plants, supplied by fracking and offshore drilling, which produce most of Maine’s electricity, you’ll be producing your own clean, renewable energy. In Maine, residential customers like you account for 22.2% of the state’s total energy consumption.

The disadvantages: The cost of installation. The average solar installation costs around $20,000. Incentives like the U.S. Residential Renewable Energy Tax Credit can bring the overall cost down, over time. You can get help with the initial costs from Efficiency Maine, a program that offers homeowners loans up to $15,000 toward the cost of energy efficiency projects.

The average Maine family uses 18,300 watts of energy on an average day. And, on average, they’ll get 4 hours of sweet Maine sun each day. So, to get enough energy to keep the power running all night, they’ll need their solar power array to generate 4,575 watts of energy per hour while the sun’s out.

To figure out exactly what you’d need based on where you live in Maine—and how much money you’d save—use this solar savings calculator:

Maine is a promising market for solar energy: it has lots of sunshine, and needs to end its heavy reliance on fossil fuels. It ranks 33rd in solar capacity. While there are ample advocates for solar in state government, the conservative governor and a significant legislative faction are major opponents. Like most of the Northeast, it has very high energy costs and consumption, making solar a cost-effective part of its energy portfolio if the political situation improves.

The Public Utilities Commission has a tax credit called Net Energy Billing (NEB), that is under threat from Gov. Paul LePage and Tea Party legislators. The program credits private solar operators (including homeowners and small businesses) that make a positive net energy contribution to their utility’s grid.

LePage vetoed a bill, LD 1649, that would have replaced NEB with a tax credit and, according to proponents, would have spurred growth in Maine’s solar industry and solar capacity. The veto was nearly overridden by the State House of Representatives, but fell short by two votes despite substantial bipartisan support.

Remarkably, solar advocates in Maine also blame some of the larger solar energy companies, like Sunrun and Solar City, for the bill’s defeat, says the Portland Press-Herald. Big companies argued that the proposed credit would favor utilities and solar farms over home installation.

The city of Portland, the state’s largest, has proposed covering a landfill with a solar farm.

A farmer near Farmington wants to develop the state’s largest solar farm at his dairy farm.

Colby College, in Waterville, will soon build a solar farm that will provide an estimated 16% of the College’s energy.

In June 2017, Reading Municipal Light Department announced that Wilmington will be the location of their first Solar Choice project.

In February 2017, IGS Solar completed a solar project in Madison. The project will provide 5 MW of solar power for Madison Electric Works.

By the end of 2019, Ranger Solar should be finished with the Chariot Solar Project. The $50 million project is planned for Hinsdale.

Environment Maine released a study on solar in July looking at solar nationwide and how Maine can develop a significant industry, and lobbied in favor of LD 1649.

Both the Natural Resource Council of Maine and Maine Conservation Voters lobbied in favor of LD 1649 and are working on new efforts to advance solar power.