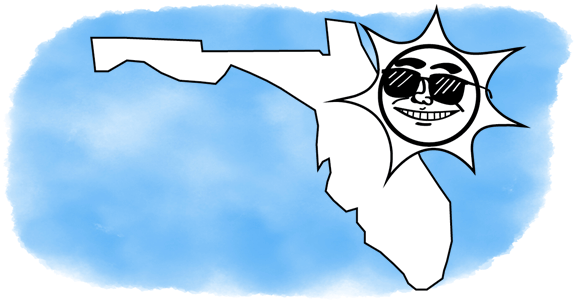 Going solar? Good call. It’s the right choice for your pocketbook and for the climate. If everyone in Florida used solar power, it would take 251 billion pounds of carbon out of the atmosphere every year—according to the EPA’s greenhouse gas calculator, that’s the equivalent of planting a forest that would cover an area more than twice the size of the state.

Solar power is a growing part of the energy mix in Florida. Nationally, the state ranks #2 in solar energy use.

The biggest advantage of solar energy? The cost—$0. For the average Florida household, generating all their own electricity with solar would save $1,558/year. Also, you’re doing a favor for the next generation. Instead of relying on natural gas plants, supplied by fracking and offshore drilling, which produce most of Florida’s electricity, you’ll be producing your own clean, renewable energy. In Florida, residential customers like you account for 29.1% of the state’s total energy consumption.

The disadvantages: The cost of installation. The average solar installation costs around $20,000. Incentives like the U.S. Residential Renewable Energy Tax Credit can bring the overall cost down, over time. Depending on where in Florida you live, you may be able to get low-interest financing for your solar energy project.

The average Florida family uses 36,400 watts of energy on an average day. And, on average, they’ll get 5.25 hours of sweet Florida sun each day. So, to get enough energy to keep the power running all night, they’ll need their solar power array to generate 6,933 watts of energy per hour while the sun’s out.

To figure out exactly what you’d need based on where you live in Florida—and how much money you’d save—use this solar savings calculator:

Florida has tremendous potential for solar generation but lags far behind peer states like Texas and California due to its lack of serious renewable energy policy and investment.

Florida voters demonstrated in August 2016 that they want to pursue serious solar development by voting 72% in favor of a state constitutional amendment creating pro-solar tax breaks.

Then, in November, voters rejected a sneaky measure backed by traditional utilities that would have limited solar expansion—but was positioned to voters as pro-solar. A coalition of solar industry and environmental groups helped defeat the bill. “Sunshine State voters have spoken clearly: they want more solar friendly policies,” said Stephen A. Smith, executive director of the Southern Alliance for Clean Energy.

Since Referendum 1 has been defeated, Tesla subsidiary SolarCity will be moving back into the state.

The state has taken some measures to promote solar and other renewables, however. New public buildings are required to include solar and energy efficient appliances if the systems are cost effective. Florida adapted its building code to meet International Energy Conservation Code standards. Covenants and other access restrictions can’t be placed on solar and renewable sources—including clotheslines. Solar systems are exempt from sales tax. The state allows local governments to set up PACE programs, which allow property owners to take out loans for energy improvements. Residential and commercial solar projects are exempt from property tax.

Like most states, Florida mandates net metering from its utilities. Net metering deducts energy private solar/renewable operators have generated from the total cost of their utility bill and credits those small operators for any excess power generation that goes to the grid at large. In Florida, net metering credits are expired twelve months after they are earned. Systems with up to 2 MW of capacity are eligible.

Investor-owned utilities are required to disclose their fuel mix to customers on a quarterly basis. Utilities can claim a modest tax credit for generating renewable energy. Utilities are also required to meet the state’s efficiency standards.

In June 2017, Naples Zoo announced a plan to cover some of the overheated parking areas with solar panels, the 700 solar panels will supply 200 kW of solar energy while accommodating the needs of visitors.

In Tallahassee, a 20 MW solar energy facility is being constructed on Tallahassee International Airport. The project was announced in June 2017 and will supply 3,400 homes with solar energy.

Floridians for Solar Choice is the group campaigning against a utility-backed ballot measure, Amendment 1, to restrict solar access.

SEIA maintains a Florida chapter, which is also campaigning against Amendment 1.

The Florida Solar Energy Center is an R&D and education group based at the University of Central Florida.

Go Solar Florida is a nonprofit partnership of several local governments and educational institutions that works to make solar installation easier for Floridians.

The Southern Alliance for Clean Energy is an advocacy and education group for clean energy that has contributed to pro-solar campaigns in Florida.