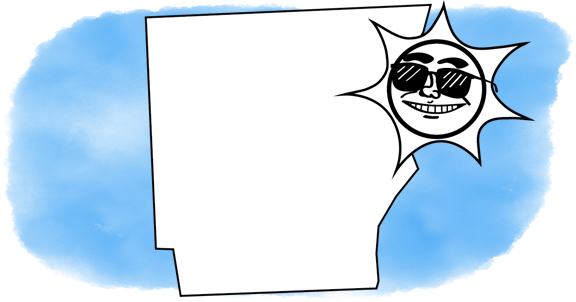 Going solar? Good call. It’s the right choice for your pocketbook and for the climate. If everyone in Arkansas used solar power, it would take 80 billion pounds of carbon out of the atmosphere every year—according to the EPA’s greenhouse gas calculator, that’s the equivalent of planting a forest that would cover 89% of the state.

Solar power is not yet a big part of the energy mix in Arkansas. Nationally, the state ranks #40 in solar energy use.

The biggest advantage of solar energy? The cost—$0. For the average Arkansas household, generating all their own electricity with solar would save $1,304/year. Also, you’re doing a favor for the next generation. Instead of relying on coal, natural gas, and nuclear plants, which produce most of Arkansas’s electricity, you’ll be producing your own clean, renewable energy. In Arkansas, residential customers like you account for 22.2% of the state’s total energy consumption.

The disadvantages: The cost of installation. The average solar installation costs around $20,000. Incentives like Arkansas’ generous rebates for solar energy production, and the U.S. Residential Renewable Energy Tax Credit can bring the overall cost down, over time.

The average Arkansas family uses 38,100 watts of energy on an average day. And, on average, they’ll get 4.75 hours of sweet Arkansas sun each day. So, to get enough energy to keep the power running all night, they’ll need their solar power array to generate 8,021 watts of energy per hour while the sun’s out.

To figure out exactly what you’d need based on where you live in Arkansas—and how much money you’d save—use this solar savings calculator:

Arkansas ranks competitively for a state its size in solar capacity, largely due to its generous net metering policy.

Arkansas doesn’t have many pro-renewable policies, but its net metering is uniquely generous. Net metering requires utilities to compensate folks who install solar energy for the electricity they create and use, and for the electricity they send back to the grid. Arkansas allows small generators (25kw or smaller for residential, 300kw or smaller for other users) to earn credit for up to 100% of what they draw off the grid, and prohibits utilities from expiring earned credits. Essentially, small scale operators can make money off of their solar power—not just earn a subsidy from their utility.

In April 2017, L’Oréal opened its new solar facility in North Little Rock, AZ. The project will supply 1.3 MW of solar energy to the factory.

In June 2017, Ouachita Electric turned on a 1 MW solar project in Holly Springs, the project will enable community members to use renewable solar energy.

The Arkansas Renewable Energy Association (AREA) is a non-profit and the Arkansas chapter of the American Solar Energy Society (ASES). AREA lobbies in favor of pro-renewable energy policies.