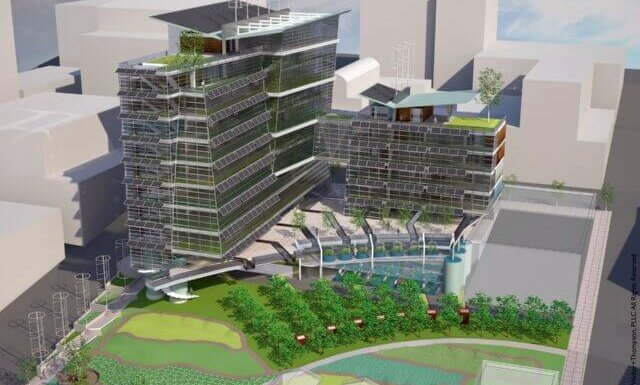 The current 3.3 billion global urban population is expected to grow to 5 billion by 2025. Today our agricultural footprint is the size of South America…what will it be tomorrow?

Vertical Farming is one concept that is being referenced as a method for growing food and produce is smaller spaces, urban environments, and other vertical places you might not expect.

What is Vertical Farming?

“Vertical farming is the agricultural process in which crops are grown on top of each other, rather than in traditional, horizontal rows. Growing vertically allows for conservation in space, resulting in a higher crop yield per square foot of land used. Vertical farms are mainly located indoors, such as a warehouse, where they have the ability to control the environmental conditions for plants to succeed.”

EDITT Tower (“Ecological Design In The Tropics”) is being built in Singapore with the financial support of the National University. The 26 story tower will have over half its surface area covered by organic local vegetation. Solar panels will generate up to 40% of the building’s energy demands, and human waste will also be converted into an energy source via an on-site bio-gas facility. The Architecture firm TR Hamzah & Yeang is constructing the building using recycled and recyclable materials when possible! 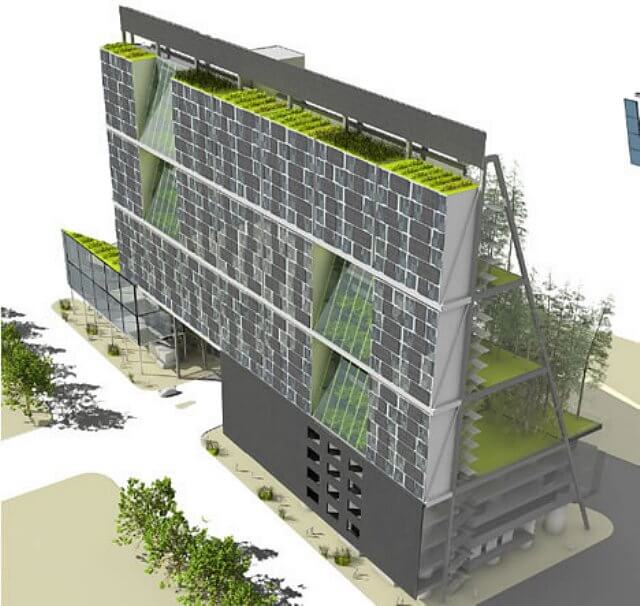 Mithun Architects in Seattle designed a “Center for Urban Agriculture” — an integration of crops and livestock onto a 7.2 acre urban plot.
Buckminster Fuller Challenge
Clepsydra Urban Farm by Bruno Viganò & Florencia Costa. The 1500 sq ft footprint urban lot prototype (10-story) produces the equivalent to 6 acres of farmland for certain crops or 40 tons of tomatoes a year. The prefab structural frame is built with mechanically assembled steel rods needing no welding, enable fast mounting, disassembling and maintenance operations. The enclosure is made of a transparent, resistant structural plastic membrane (ETFE). Clepsydra can be composed into multiple kits creating sustainable neighborhoods and cities. 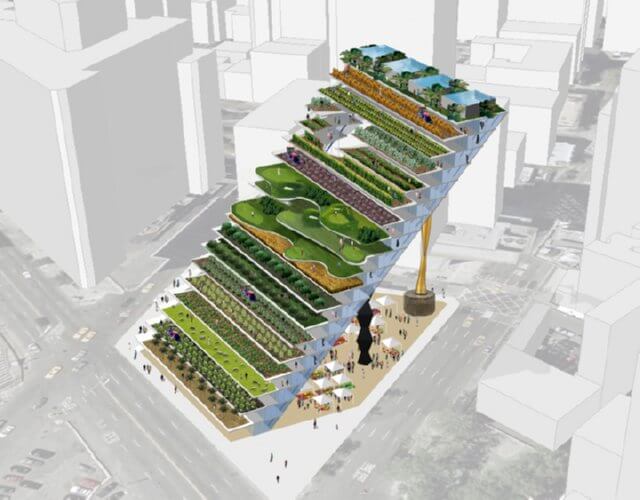 WORKac’s version of vertical farming combines farmers’ housing in a series of stepped terraces with a farmer’s market and public space below. Source 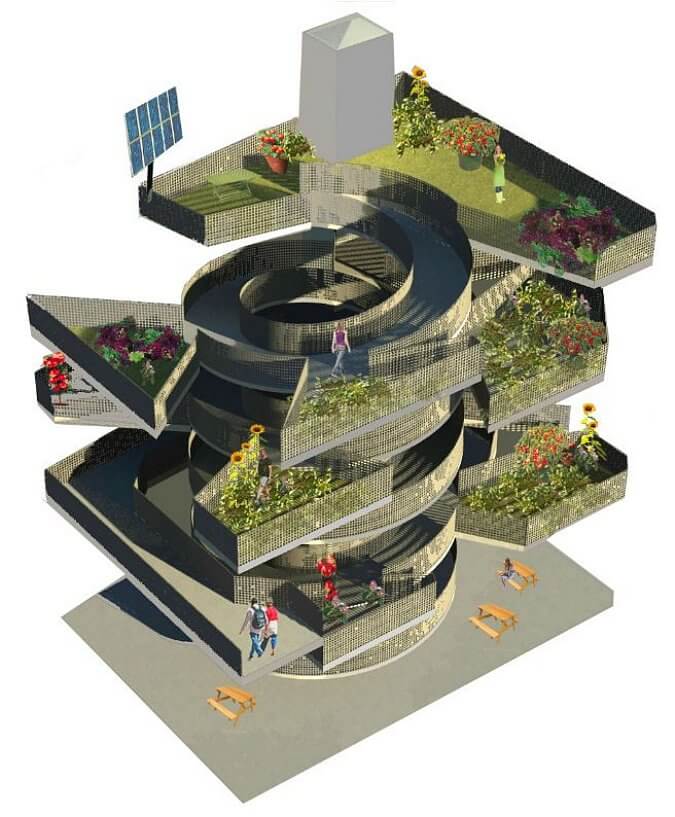 An Urban Garden. Lucie Sadacova’s project aims to bring an innovative solution by designing multileveled vertical urban garden ‘allotments’ which in turn make use of derelict or underused spaces. Eventual multiple functions of the building, that is open to the public, include an interpretation centre for schools and seasonal use for those affected by S.A.D (Seasonal affective disorder). For more: luciesadakova.com 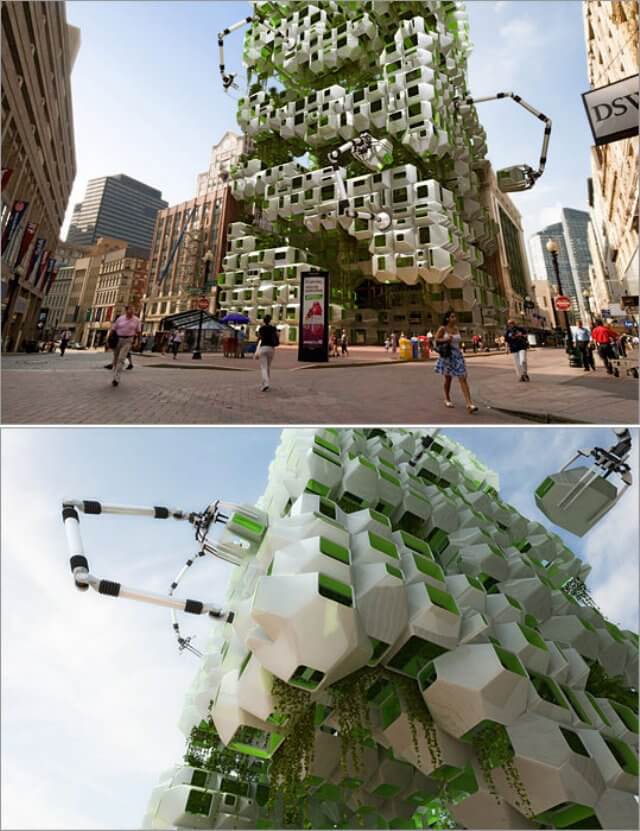 Höweler + Yoon Architecture and Squared Design Lab proposes to build a vertical algae-powered bioreactor on the downtown Boston Filene’s site.
The structure would be made of prefabricated modules, or “eco-pods,” containing materials to manufacture biofuels. The robotic arms would reconfigure the pods to optimize growing conditions. Source 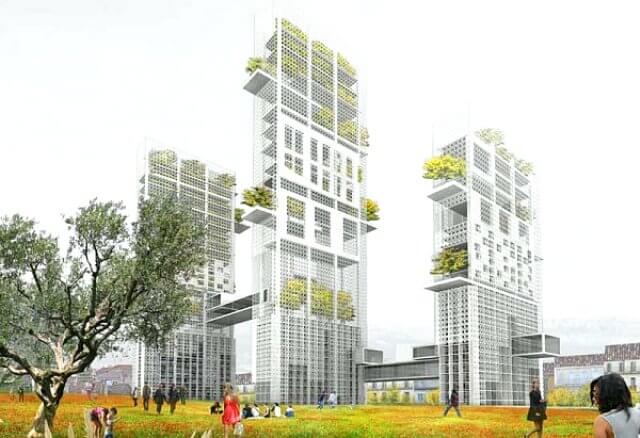 The “Euromediterranee” project is a proposed vertical village for the city of Marseilles. By: Stéphanie Durniak, Baptiste Franceschi, Anthony Frutoso, Caroline Mangin. Source 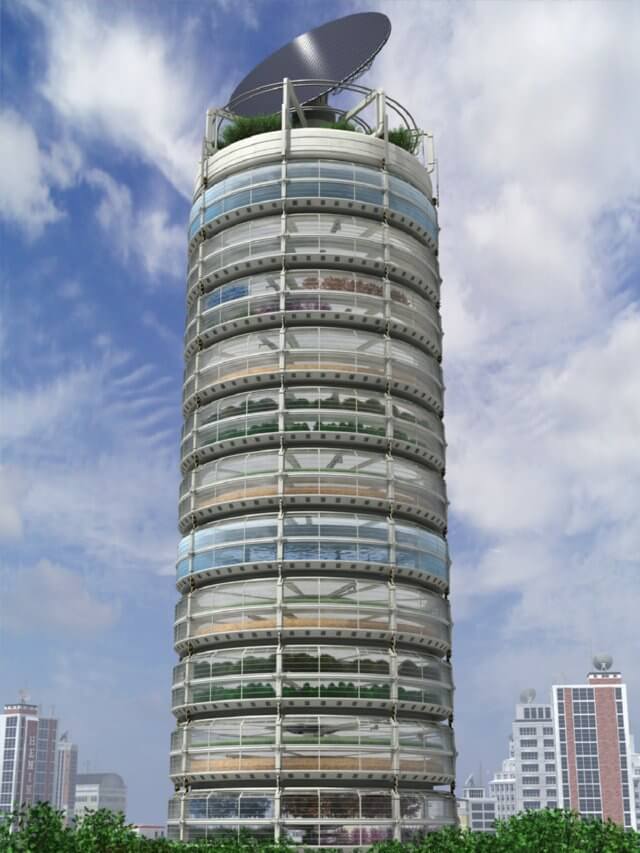 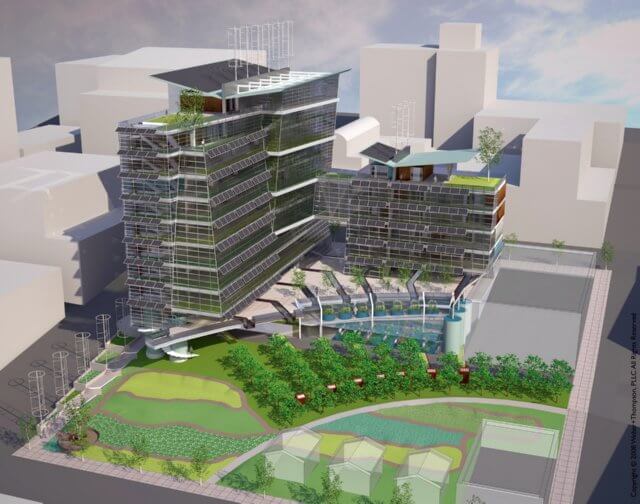 Eco-Laboratory by Weber Thompson. A self sustaining, diverse ecological system. See their site. 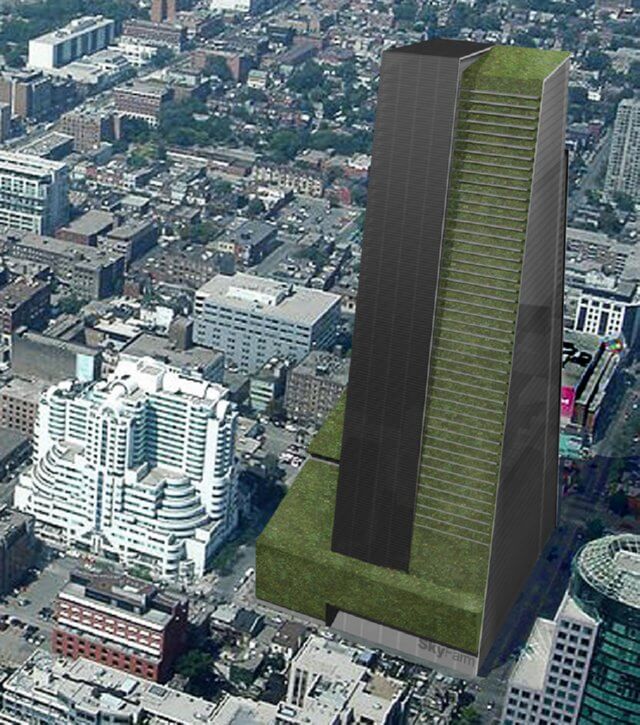 Gordon Graff’s plans for a 58-story agricultural tower called the Sky Farm in Toronto. Its 8 million square feet of growing area, equal to over 180 acres, has the potential to provide enough food for 35,000 citizens per year. dialogdesign.ca 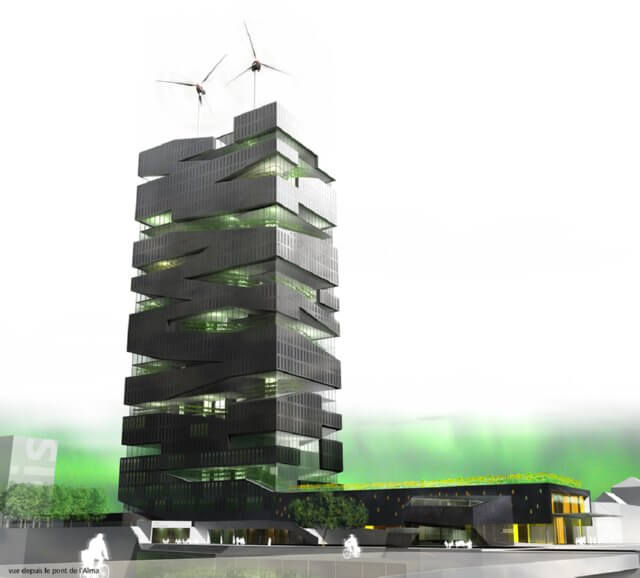 The Living Tower by SOA Architects. A proposal for a Parisian tower dedicated to agriculture. Lots more at the architects website. 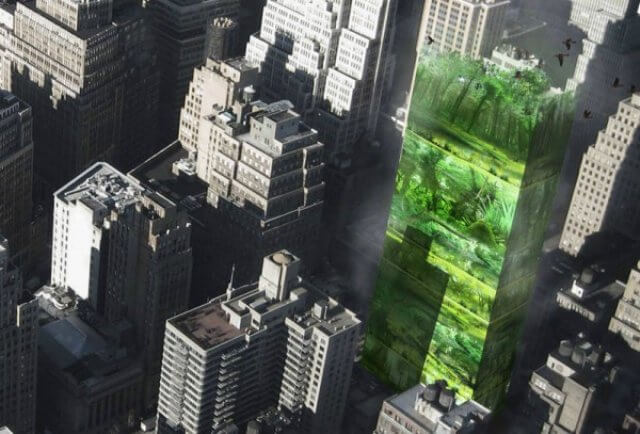 The Vertical Park by architects Remigiusz Brodzinski, Agnieszka Lepecka, Pawel Pawlowski, Michal Stys and Monika Tutaj-Wojnowska. A place to hear birds chirping, the rustling of leaves and the sound of your heart beat on the 30th floor. Source 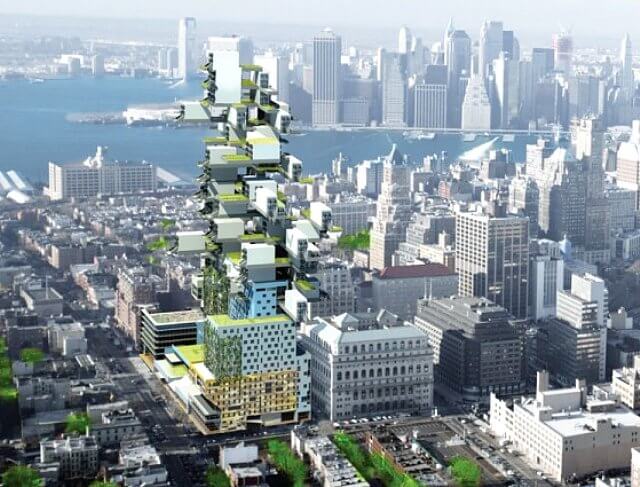 Rogers Marvel Architects’ ‘Sustainable Yard-Scraper’ a proposal for the redevelopment of the Brooklyn House of Detention. Stacked brownstones each with their own yard. A vertical garden is included in the building design. Source 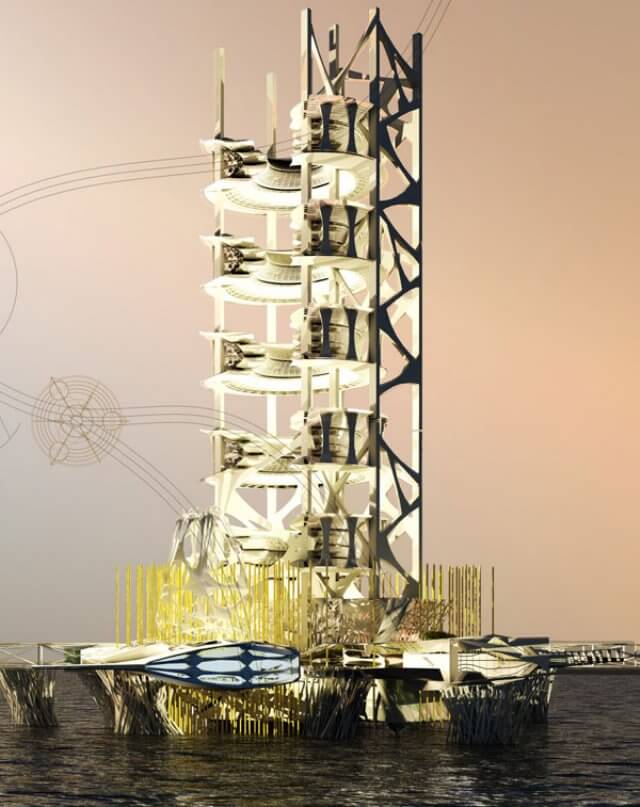 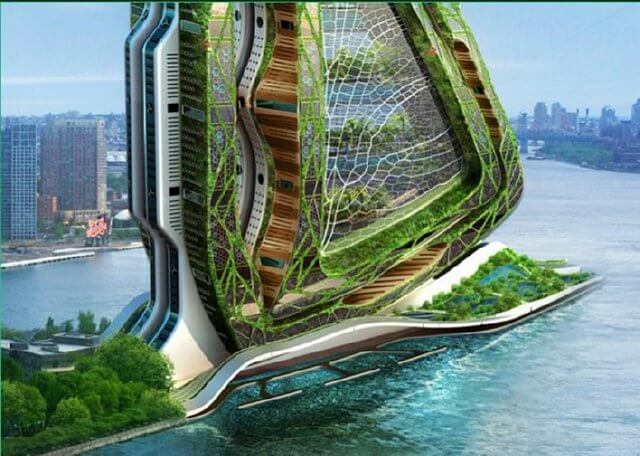 Behold Belgian architect Vincent Callebaut’s Dragonfly proposal for Roosevelt Island in New York! The multi-use building is designed to be completely self sufficient with 132 floors of residential and urban farming space with enough room to raise cattle and poultry and 28 different types of crops, all within a controlled energy producing environment. vincent.callebaut.org 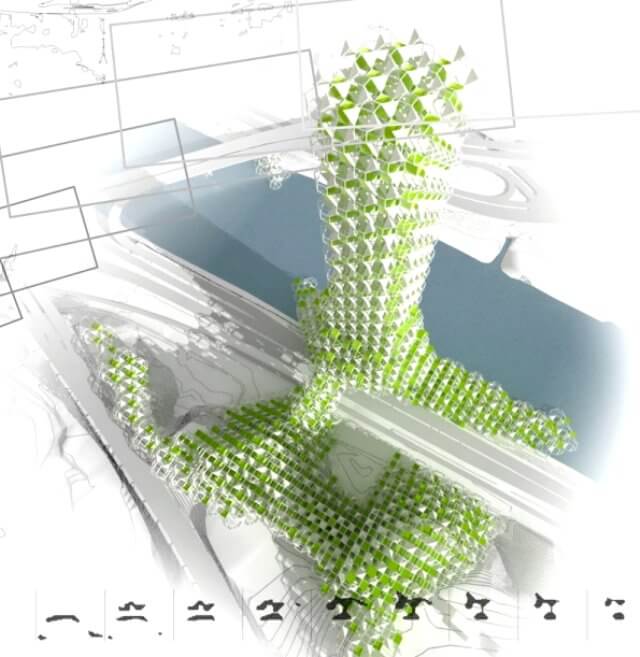 Architects Michaela Dejdarova and Michal Votruba have proposed a sustainable vertical farm for the city of Prague that is intended to be a communal farm for the city. The modular structure consists of a cluster of tetrahedrons grouped to create an exoskeleton, which further supports hundreds of green terraces for agriculture. evolo.us 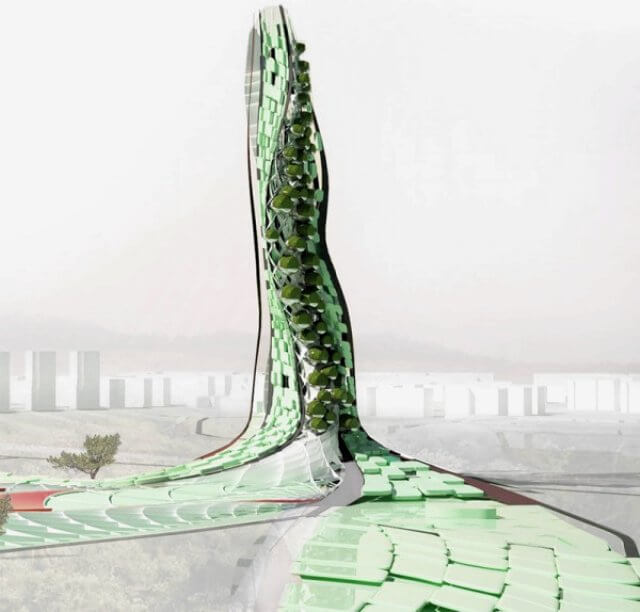 UK architects James Murray and Tobey Lloyd propose a series of vertical hydroponic towers for Syria utilizing but ten percent of the water needed in regular farming. A waffle structure is the anchor for growth pods. evolo.us 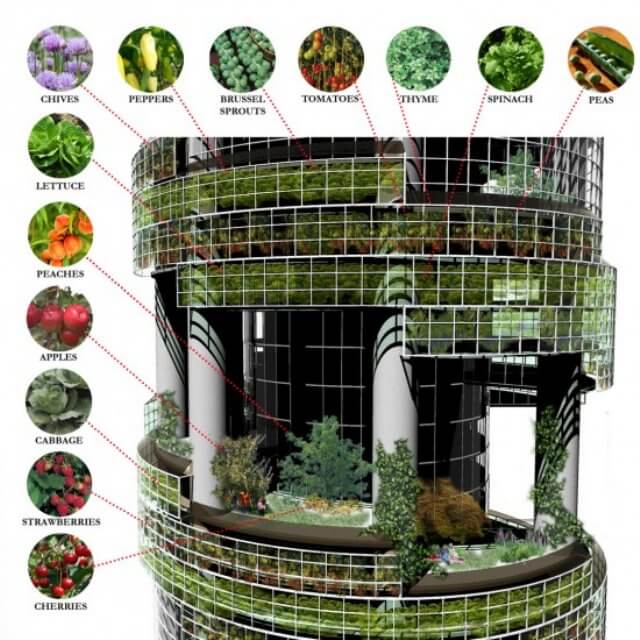 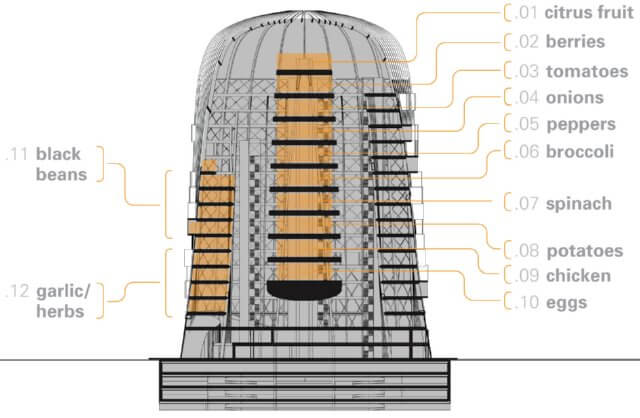 BrightFarm Systems and Kiss + Cathcart Architects are currently developing the first prototype Greenmarket system (hydroponic food production facility) to be built at Masdar City, in Abu Dhabi. This prototype system will act as a research and demonstration center for subsequent GreenMarket systems. The GreenMarket utilizes BrightFarm Systems pioneering rooftop and facade mounted, sustainable greenhouse designs, to integrate hydroponic food production into civic buildings. The layers of vegetation encased in the walls of the building provide shade for the building interior. 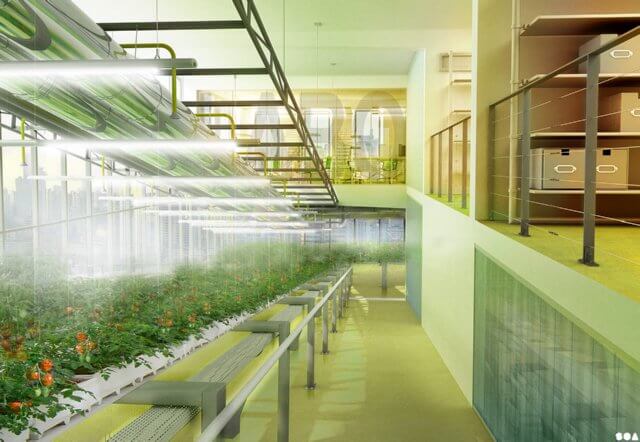 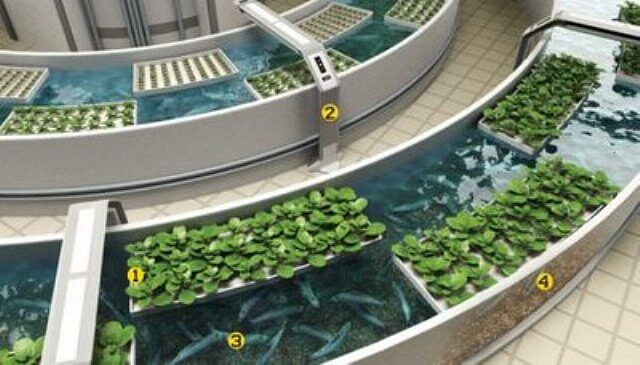 The Aquaponic Merry-Grow-Round by Graham Murdoch. A loop system combining aquaculture and hydroponics is called “aquaponics.” The fish waste becomes plant fertilizer, while the plants clean the dirty water.

21 seconds of the Aquaponic Merry-Grow-Round.

Food Print Manhattan – This says it all… © The Why Factory.

Where to Start with Vertical Farming

Valcent Products Inc. is a leader in the development and manufacturing of commercial vertical crop technology for global markets. Valcent is a pioneer and leader in eco-technology with its core research and development in sustainable, renewable, and intensive agricultural products. For more information, visit: www.valcent.net and www.valcent.eu.

‘By the year 2050, nearly 80% of the earth’s population will reside in urban centers. Applying the most conservative estimates to current demographic trends, the human population will increase by about 3 billion people during the interim. An estimated 109 hectares of new land (about 20% more land than is represented by the country of Brazil) will be needed to grow enough food to feed them, if traditional farming practices continue as they are practiced today. At present, throughout the world, over 80% of the land that is suitable for raising crops is in use (sources: FAO and NASA). Historically, some 15% of that has been laid waste by poor management practices. What can be done to avoid this impending disaster?’ www.verticalfarm.com

Dickson Despommier is the Emeritus Professor of Public Health and Microbiology at Columbia University, and the vertical farming concept grew out of a medical ecology course he taught in 1999. Articles about the subject have been published in The New York Times, U.S. News & World Report, Popular Science, Scientific American and Maxim. In October 2010, his first book on the subject, The Vertical Farm: Feeding the World in the 21st Century, was published. More can be learned through his website, verticalfarm.com.

Vertical Gardening: Grow Up, Not Out, for More Vegetables and Flowers in Much Less Space by Derek Fell

The Essential Urban Farmer by Novella Carpenter and Willow Rosenthal