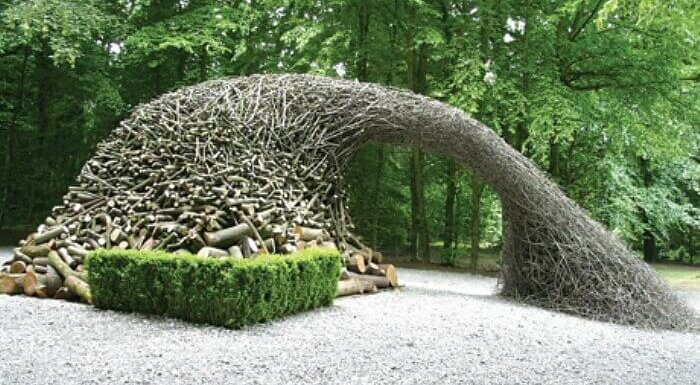 The materials for your next project are just lying on the ground.

The Stick Sculpture Of Patrick Dougherty

Combining his carpentry skills with his love of nature, Patrick Dougherty began to learn about primitive building techniques and to experiment with tree saplings as construction material beginning about 1980. He quickly moved from small single pieces on pedestals to monumental site-specific installations. To date he has built over two hundred twenty such massive sculptures all over the world. His home base is his handmade log home in Chapel Hill, NC.

The Summer Palace
Morris Arboretum of the University of Pennsylvania, Philadelphia, PA, 2009.
By Patrick Dougherty. stickwork.net

The Stick Sculpture Of Jaakko Peru

Jaakko Pernu was born in 1958 in Kälviä, Finland. He currently lives and works in the city of Kokkola. “My working techniques are a direct continuation of the traditional Finnish itch for ‘hands-on’ methods, in which, in one form or another, materials derived from nature were always used. I feel that my completed works can be a part of the defined art world of galleries or museums; however, they can also be within reach of the so-called man in the street, who might bump into the artworks by chance along unfamiliar paths. In that instance, you could say that the intuitive ball of comprehension has been thrown to the viewer.” Some in process images here: www.environmentalart.net

The Stick Sculpture of Jenni Tieaho

Jenni Tieaho lives and works in Uusimaa, Finland. “My work tells stories about the Finnish forest, lakes, the mossy mountains and vast open fields, in an often folkloric, mystical and magical way. Pine needles, pinecones, hay, moss, the roots of plants or the tree bark weave into stories in which are hidden the powerful expression of nature. They express various human feelings, longing, closeness, hurt and belonging. Exploration and adventure are the making of art, also a part of me as a person. Art as a way of life is a playful interaction for human beings. It is a language with which I communicate with my own surroundings.” environmentalart.net stick sculpture
By Jonathan Brilliant
The Goldsworthy of the coffee shop uses coffee stir sticks, the seven inch birch ones from Starbucks, which have the appropriate bend and weave-ability. “In his ongoing series of work, Jonathan continues to explore his sense that the coffee shop and related consumer environs are more organic and nurturing than the ‘real’ natural environment.” jonathanbrilliant.com

No glue or other adhesive is used. The sculptures are created entirely in situ using only tension and compression, so therefore the pieces are not permanent. jonathanbrilliant.com

Treehugger at Pratt Institute, Brooklyn, NY.
Treehugger Project, by Agnieszka Gradzik and Wiktor Szostalo, is an ongoing work of environmental art made from twigs, branches, vines, and other natural materials in the shape of human figures hugging trees. The works represent the artists’ ongoing mission to help people rediscover their relationship with nature. pratt.edu