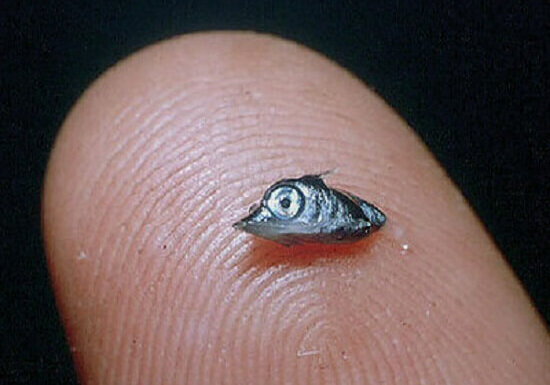 You are here: Home / Animals / Baby Marlins And Sailfish

The term “Billfish” refers to certain predatory fish species belonging to the family Istiophoridae. Their characteristics include a spear-like rostrum or “bill,” which is used for slashing at and stunning prey. Marlins, sailfish, spearfish and the swordfish are all billfish. Marlin and sailfish distribution range is basically worldwide throughout both tropical and temperate regions (seasonally).

A baby blue marlin in the larvae stage. The eye to body ratio is quite high! This marlin might weigh up to 1800 pounds at maturity! www.billfish.org

Baby marlin getting a bit bigger and starting to grow a dorsal fin. Marlin can grow to 14 feet. www.marlinquest.com

Baby marlins have large sail-like dorsal fins early on. Their bills do not develop until later on. reefbuilders.com

Immature sailfish on the other hand have a large dorsal and large bill when young.
oceancurrents.rsmas.miami.edu

Baby sailfish with large bill. The dorsal fin is already quite large. www.willdrost.photoshelter.com

Adult sailfish. Sailfish have been clocked at 68 mph. They are one of the fastest sea creatures out there. Sailfish are smaller than marlins rarely reaching 10 feet and most often weigh less than 200 pounds. Photo by Marc Montocchio.

Adult blue marlin. As they grow their dorsal fins recede but their bills grow as long as the sailfish. Marlins are are extremely fast. A black marlin has been clocked at 80 mph. The Atlantic blue fin marlin can reach 16.4 feet and weigh 1800 pounds. Photo by Marc Montocchio.