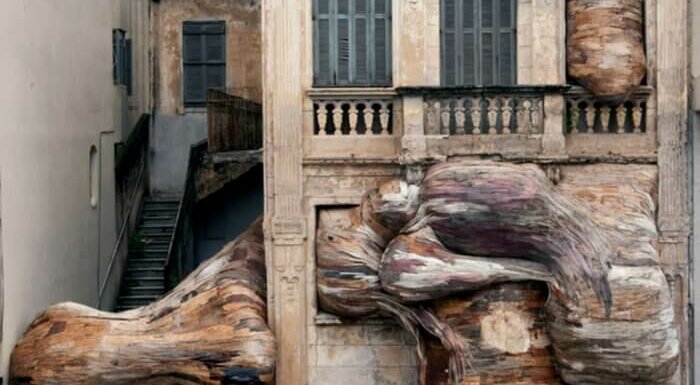 You are here: Home / IG / The Art Of Henrique Oliveira

The artist Henrique Oliveira uses old plywood, fencing and PVC as his medium. Recycled from dumpsters and landfills from his home city, São Paulo, Oliveira shapes plywood around PVC forms.

A Origem do Terceiro Mundo (The Origin of the Third World) 2010.
www.henriqueoliveira.com

Henrique Oliveira was born in Ourinhos, Brazil in 1973. He received a BFA in painting in 2004 and a masters in visual poetics in 2007 from the University of São Paulo, Brazil. He lives and works in São Paulo. Oliveira uses salvaged wood collected from the streets of São Paulo to create massive scale, site-specific installations with dense layers that twist, curve, bend, and split. Oliveira uses tapumes — which in Portugese can mean fencing, boarding, or enclosure — as a title for many of his large-scale installations. The term makes reference to the temporary wooden construction fences seen throughout the city of São Paulo where Oliveira lives.

Henrique’s breakthrough occurred when he was a student at the University of São Paulo, where for two years the view from his studio window was a wooden construction fence. Over time Oliveira began to see the deterioration of the wood and its separation into multiple layers and colors. One week before the final student show opened, the construction was finished and the worn out plywood fence was discarded. Oliveira collected the wood and used it in his first installation. henrique-oliveira