You are here: Home / Animals / Tips For Bear Awareness

If you live alone, as I do, in a cabin deep in the woods, it is more than a bit frightening to hear noises in the night.

Last year, on a cold and foggy morning in late November, I awoke to a loud thump on the porch. Startled, I stumbled from my bed, grabbed the pepper spray I keep for personal protection off the nightstand and cautiously peeked out the window.

The first slivers of daylight were stealing over the mountain, but it was still quite dark. Glimpsed through the crack in the curtains, I saw what I perceived to be a large man, standing with his back to me, outside my entryway. Needless to say, I was terrified. 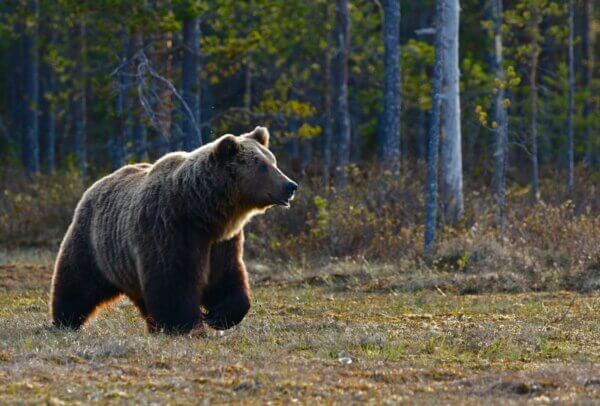 However, before I could respond, the “man” whirled around and threw his entire body weight crashing against my door. As his head dropped below the window frame of the door, my mind registered: It’s not a man, it’s a bear. I shouted, I screamed, “Get out of here – now!” as I banged with the closest weapon to hand, my hairbrush, against the inside of the metal door.

The racket and ruckus scared him off. The bear lopped of the porch, only to wander around the back of the cabin where he tried to crawl up the window frame. Pulling the safety pin on my can of bear spray, in case the bear broke the glass on the window, I shouted and made more noise, which did finally run him off. The last I saw of him, the brute was retreating to the darkness of the forest.

My experience ended without harm to myself or the bear: My neighbors were not so lucky. Fortunately, they were not at home as the bear tore the side door off their cabin, and gaining entry, trashed their home: seeking food and a snug place to den up for the winter. The USFS game warden responded, trapped the bear, and relocated the 3-year-old, male black bear to a new home in the backcountry.

As hibernation season quickly approaches, bears are not selective when it comes to choosing a winter resting place. Seeking comfort, bears often line their den with leaves, grass, moss, or twigs. Bears den in brush piles, hollow trees, rock piles, caves, and on occasion, human structures. Homesteaders should be on alert if bears are common in their area. In late fall, it is not uncommon for bears to take up residence in barns, sheds, woodlots, livestock shelters, or outbuildings.

Protect Your Livestock From Bears

Bears are attracted by the scents and sounds of the homestead and will prey on young, vulnerable, or injured farm animals and poultry.

Watch Out For Bears

It is always dangerous to encounter a bear. They are particularly aggressive before hibernation. However, bears, by their very nature, are timid and shy, typically avoiding humans. Encounters occur when a bear has been attracted by garbage, food, other odors, or has been surprised by a hiker or hunter. Both grizzlies and black bears fiercely defend their prey and attack if another animal or human gets too close to their food source. Never forget: Bears will attack if surprised at close range.

Back in 1993, Montana designated the grizzly bear as the official state animal. Grizzly bears inhabit Glacier National Park and the mountains of northwest Montana. It’s no wonder they are intimidating. According to State Symbols USA, “Grizzly bears are the most massive carnivores in America. An adult grizzly bear can stand more than 8 feet tall on its hind legs, weigh up to 1,500 pounds, and run at speeds up to 35 miles an hour.”

Ursus americanus or black bear, and Ursus arctos, the grizzly bear, are sympatric species occupying roughly the same territory. However, black bears and grizzlies do not interbreed. There are more than 300,000 black bears living in the United States, populating areas from Washington state to Florida.

Scientific research also indicates that approximately 1,800 grizzly bears remain in the lower 48 states: about 850 live in Montana. The majority of these bears are located in the Northern Continental Divide Ecosystem, which includes Glacier National Park and the Yellowstone National Park population.

If you live on a rural homestead or plan to spend time in the high country, it is prudent to do the research and acquaint yourself with bear behavior. Female bears, protecting their young, are the most dangerous animals you can encounter in the woods. It’s important to know how to alert bears to your presence. Avoid actions that attract bears. Learn how to read wildlife tracks and signs to steer clear of bears.

If you sight a bear, maintain a safe distance, behaving in a non-threatening manner. The majority of human encounters with both grizzlies and black bears do not result in physical assaults: Bears seldom cause injuries. In fact, it is more common for a frightened human to cause unnecessary injury to the bear.

Bears typically avoid human contact. However, if you do surprise a bear at close range, drop a non-food item on the ground in front of you and very slowly back away. Speak in a soft monotone voice, avoiding eye contact.

Report all aggressive bear encounters to the nearest USFS office or Fish and Game officer. Your timely report may prevent someone else from being mauled.

A Bit About Bears

Both black bears and grizzly bears are a bit different from most hibernating mammals, going into a deep physiological state known as winter sleep or hibernation. However, with bears it is not true hibernation, but rather, winter dormancy. Bears can be especially dangerous if hibernation is disturbed.

Bear hibernation is based on diet. Berries, fish, insects, and vegetation are sparse during the winter, often covered by deep drifts of snow and ice. Mother Nature provides bears with an insatiable appetite when food is plentiful and bears chow down on large quantities of food to build up their fat reserves for the coming winter hibernation.

Biological wonders of nature, bears do not usually awaken during the dark days of winter. Their body temperature drops by a few degrees and their heart rate only decrease slightly. Typically, bears do not awaken during winter sleep. They do not eat, drink, or exercise. Remaining in their den throughout the long winter, bears do not defecate or urinate during their winter slumber.

Although inactive all winter, bears do not sustain bone loss, muscle atrophy, or wasting in the same way humans would. Bears’ bones continue to grow during hibernation with their reserve of fat satisfying all of their nutritional needs. As bears attempt to put on weight and scrounge for the last bits of food available before the snow hits, they can exhibit quite an ugly temperament.

Bears Give Birth While Asleep

Left undisturbed, grizzly and black bears sleep all winter long: many bears don’t even roll over once they’re comfortable and settled down for their long winter’s nap. Though bears experience deep slumber, they wake up quickly. Once aroused, they have a grumpy attitude and respond with aggressiveness and surprising agility.

Bears that are pregnant do not sleep as well as those that are not. In fact, bears, both black and grizzly, give birth during hibernation. Pregnant bears remain somewhat active, as their bodies must maintain a higher temperature to meet the demands of birthing and nursing newborn cubs. Cubs are typically born during late January into early February. Newborn cubs snuggle with their mother until the spring.

When it’s time for winter sleep, pregnant bears are the first to den followed by females with cubs. Big male bears are last to enter hibernation. Bears enjoy their winter sleep for five to six months or more, usually entering the den in late November and not awakening until mid-April. The length of their winter sleep is dependent on location, climate, sex, age, and reproductive status of the individual bear. Some bears enter the den as early as late September and do not reappear until the first of June.

Bears shed their footpad during hibernation: licking their feet and consuming portions of the shed pads during their winter sleep. Come spring, re-grown pads are tender and have a tendency to crack and bleed when the animal first ventures out of the den.