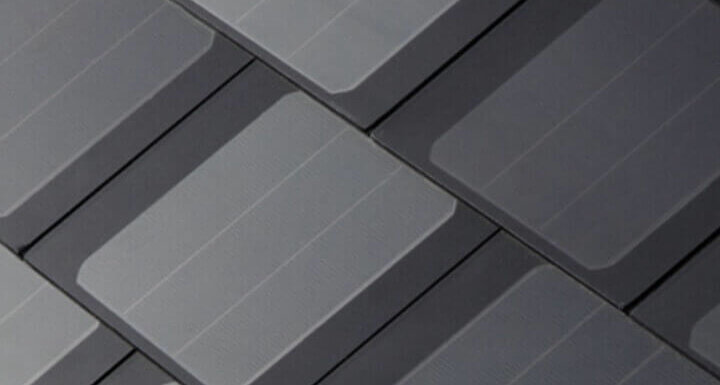 You are here: Home / Energy / Solar / The Solar Roof That Will Cost The Same As Shingle Roofs

The way Elon Musk tells it, today’s solar panels have the same problem electric cars once did—they look funny and don’t work that well. He doesn’t think solar-paneled roofs will truly take off until they’re as attractive and as inexpensive as other kinds of roofs.

He made his point—with lifesize visual aids—in October 2016 on the lot at Universal Studios where Desperate Housewives was filmed.

Framed by a black backdrop with McMansion-style homes behind him, Musk casually dropped the information that the homes’ roofs were fully solar. Asked Musk: “Did you notice?”

How could a roomful of journalists miss something so obvious? Because it’s something we’ve never seen before—solar panels that look just like roof shingles.

This revolutionary merge of home aesthetics and energy efficiency is a collaboration of Musk’s Tesla, Solar City (which plans to merge with Tesla), and materials manufacturer 3M. A glass coating on the panels makes them look like regular shingles when viewed at an angle from afar—in other words, exactly how people view roofs.

Another benefit—because they’re made of quartz, the tiles have a “quasi-infinite lifetime,” says Musk. This video shows exactly how durable they are:

According to the Metal Roofing Institute, 7% of U.S. homeowners re-roof their homes every year—on average, that’s 5 million potential buyers/year for Musk’s product.

Manufacturing of the panels will start in 2017, with the first installations happening that year in California.

“Tesla, like Apple, scores well with customer satisfaction and brand commitment, and that’s something that no one trying to sell a solar home energy system at scale can match. As strange as it sounds, ‘buying a roof because you like your car’ might be the new “’buying a computer because you like your phone.'” — Darrell Etherington, Techcrunch

“If all of Musk’s plans come true, by the end of next year you’ll be able to walk into a Tesla store, buy a Model 3 electric car, a slate-glass solar roof, and a Powerwall 2 to manage the flow of all those electrons in your life.” — Tom Randall, Bloomberg

“Elon Musk is absolutely right, we have to figure out generation, energy storage and transportation. But we can’t all live on Wisteria Lane. We have to figure this out for everyone, not just those who can afford or desire private roofs, private batteries and private cars.” — Lloyd Alter, Treehugger

“The company will have to convince people that they should entrust something as fundamentally crucial as shelter from the elements to a brand new product from a Silicon Valley startup. There’s enough reason to pause before updating your iPhone software, to allow time for the kinks to be worked out. But what if that brand-new product was the one thing standing between your family and a thunderstorm. Would you be the first to give it a try?” — Julian Spector, GreenTechMedia