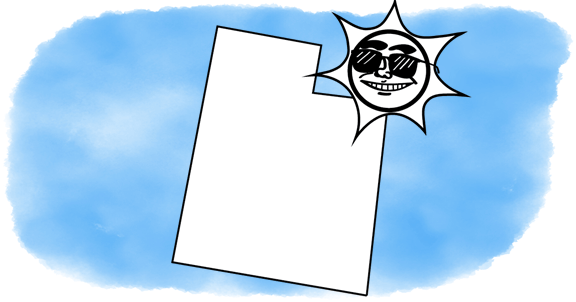 Going solar? Good call. It’s the right choice for your pocketbook and for the climate. If everyone in Utah used solar power, it would take 71 billion pounds of carbon out of the atmosphere every year—according to the EPA’s greenhouse gas calculator, that’s the equivalent of planting a forest that would cover more than half of the state.

Solar power is a growing part of the energy mix in Utah. Nationally, the state ranks #24 in solar energy use.

The biggest advantage of solar energy? The cost—$0. For the average Utah household, generating all their own electricity with solar would save $954/year. Also, you’re doing a favor for the next generation. Instead of relying on CO2-spewing coal plants, which produce most of Utah’s electricity, you’ll be producing your own clean, renewable energy. In Utah, residential customers like you account for 20.0% of the state’s total energy consumption.

The average Utah family uses 24,900 watts of energy on an average day. And, on average, they’ll get 5.75 hours of sweet Utah sun each day. So, to get enough energy to keep the power running all night, they’ll need their solar power array to generate 4,330 watts of energy per hour while the sun’s out.

To figure out exactly what you’d need based on where you live in Utah—and how much money you’d save—use this solar savings calculator:

Utah is a national solar leader. The state ranks highly in installed solar capacity and has potential for even more growth because of its ample desert sunlight and pro-solar policies.

Like most states, Utah requires its utilities to provide customers with net metering. Net metering deducts energy private solar/renewable operators have generated from the total cost of their utility bill and credits those small operators for any excess power generation that goes to the grid at large. However, net metering is now under attack by Utah’s largest private utility, Rocky Mountain Power, and might be under threat.

The Utah Jazz NBA team’s home games are powered by solar, thanks to a 2,700 panel solar array on the team’s arena installed in 2016. Hunt Electric installed the panels.

Salt Lake City’s mayor, Jackie Biskupski, announced plans in 2016 for the city’s government to draw all of its operating energy from solar by 2032. Earlier in 2017, Salt Lake City unveiled its first net-zero community, Living Zenith, that is powered by a solar photovoltaic system.

SunEdison announced plans in 2015 to construct 262 MW of solar capacity across three arrays in Iron County.

The Sports Academy, a private gym in North Logan, is one of many small businesses in Utah that have installed solar power.

This past June Utah-based solar company Vivint secured $100 million in new tax equity commitments, which will allow them to install nearly 70 megawatts worth of residential solar energy systems.

UCARE is a grassroots group that organized to oppose Rocky Mountain Power’s efforts to defang or eliminate net metering.

HEAL Utah organized to protect Utah’s air quality against pollution from nuclear waste, and eventually grew its mission into advocating for renewable energy as well.

Utah Clean Energy promotes renewable energy policies for technologies including, but not limited to solar.

The Utah Solar Energy Association is a solar industry trade group that advocates for pro-solar policy.