You are here: Home / Animals / Chickens / How To Humanely Kill A Chicken

People learn to kill chickens for many reasons. As interest in local and ethical food increases, many meat-eaters have challenged themselves to raise and slaughter their own meat.

People who keep backyard chickens for eggs often kill older chickens when they have passed their prime laying age. Even people who keep chickens as pets may find themselves needing to kill a sick or injured chicken as a humane measure.

Regardless of your reasons, you may come to a time when they need to slaughter one or more of your chickens.

It can be overwhelming and emotional to be faced with killing an animal for the first time. Here is a straight-forward guide that will explain how to slaughter a chicken humanely and eviscerate it cleanly.

Killing a chicken is straightforward compared to other animals. There are three common methods that don’t involve special equipment: the slice, the chop, and the twist.

The slice is my personal preference.

Take a very sharp knife. You can either have someone hold the chicken upside down, pinning her wings, or use a kill cone.

Slice the knife across her throat directly under the chin on either side of her larynx. Make one cut parallel to her jaw bone on each side. This slices the arteries rather than the trachea. 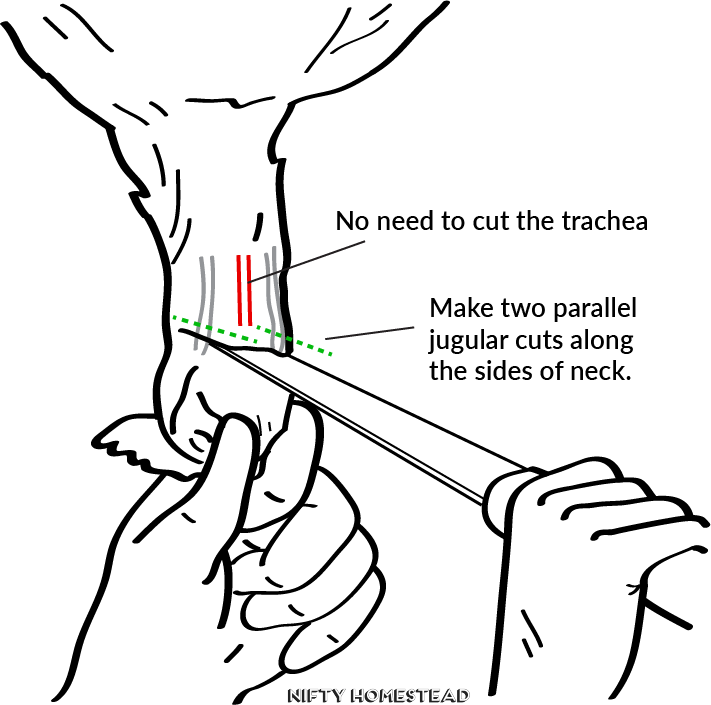 If you cut straight across the center of the throat, you have to go deeper with the knife, which will kill her more slowly and cause more pain.

How Sharp Is A Sharp Knife?

Very sharp. The sharpest knife you’ve ever handled. When you are killing an animal, the sharper the blade, the more painless and humane the death. A knife sharp enough to kill with should have an edge that drags at your skin like raw silk when you put the ball of your thumb against the edge. If your finger slides easily, without cutting you, it is too dull. The knife blade should be trying to slice your flesh with the barest pressure, and it will feel rough or “sticky” like the very fine spikes on a burr. Always sharpen your knife between every couple of kills.

The chop is possibly the easiest for beginners, but not the cleanest.

Take a sharp ax or hatchet—sharp! Not as sharp as the knife, but don’t cut your firewood with it before using it on a chicken.

Have someone else hold the chicken upside down to calm it, and then quickly lay its head on a chopping block and swing. Don’t wimp out on this. The stronger the swing, the more humane. Blood is going to go everywhere, but that’s the name of the game.

My dad describes killing chickens on his grandparents’ farm by grabbing the chicken by the head and swing it around in circles, as big as you can, until you hear a crack, or until the head disconnects from the body.

That is a variation on the twist, using the hands, or some kind of leverage, to snap the chicken’s neck. Some people would argue that the twist is a humane option if done correctly, but it requires precision, skill and follow through.

***We do not recommend this method, especially for first timers.***

You can hurt the animal unless you can make the twist with strength and without hesitation. I have never tried it and I doubt I ever will. I am too scared that I would get halfway through and, ahem, chicken out.

No matter how you kill a chicken, it will twitch and convulse strongly, and continue for thirty seconds to a minute. This can be scary and unexpected, but know that it is normal.

I watch a chicken’s eyes for a sense of when it is dead—the lids go limp, even if they spasm open again later, and the pupils stop moving. When in doubt, cut again, deeper and harder. The faster you can do it, the more humane.

If you are raising chickens for meat, or killing laying hens, troublesome roosters, or other healthy birds, you can choose to gut and eat them. See the next section for instructions. However, if you have killed a chicken because it is sick, or if you have reason to believe the chicken is infected in any way, do not eat that chicken. Bury or compost it, and clean your slaughter equipment.

Once a chicken is dead, you have a second task—processing the chicken so it can be cooked.

First, you scald the chicken to make the feathers easier to pluck. Use a pot of water at 140 degrees F. Too hot and the chicken will start to cook. Too cool, and the feathers won’t become loose.Dunk the chicken for about 15 to 20 seconds and remove. The feathers should come off easily in handfuls.

You can pluck a scalded chicken by hand or in a mechanized chicken plucker, like the one shown in this video.

Have two buckets ready—an offal bucket for waste and a clean bucket for edible organs. Of the organs, you can save the heart, liver, gizzard, and testicles of an adult rooster. Male birds killed at the usual age of meat birds have not developed testicles yet, but if you are killing an older rooster you will find sizable testicles that have a mild flavor and spongy texture.

Once the chicken is defeathered, use your knife to remove the chicken’s head, if your slaughter method didn’t do that already. Then start the evisceration at the cloaca, with another sharp knife.

Cut in a circle around the opening of the cloaca and tie the end of the intestines to prevent feces coming out as you pull. Gently pull the guts out, using your fingers or a knife to carefully separate the membranes attaching them to the body cavity.

After the guts, you take out the other organs. Most come out easily, although sometimes you have to scrape the deflated lungs off the rib cage.

The next two steps are important, but easy to forget. First, you must remove the oil gland or sac at the base of the tail, which produces a smelly, sticky grease. It is an unpleasant surprise to accidentally puncture that sac on a cooked chicken, so cut it out with your knife while gutting.

The second thing to remember, and what I find to be the most technically challenging part of gutting a chicken, is to remove the crop. The crop is a small, nubby part of the esophagus above the gizzard which stores food. It is the last thing you pull out of a chicken.

This doesn’t require any technical skill, you just have to get a grip on the esophagus, which is slippery, and pull hard. Some people remove it from the top of the neck. I was taught to remove it from the bottom, after the other organs have been removed.

The final step is to remove the chicken’s feet, which cut off easily at the knee muscle. The scaly skin peels off the feet, leaving them clean and ready to cook.

Many cities have regulations on how many chickens you can keep in how much space, and whether you can have roosters, but most cities have no laws at all on slaughter. There is a growing recognition that urban centers need to address some of the complex issues of all kinds related to urban agriculture, including slaughter. Laws have not caught up to the reality of urban homesteading, so you are not in violation of the law killing backyard chickens.

If you live in a rural area, your zoning may expressly prohibit or expressly allow the building of a slaughterhouse, but almost certainly allows killing household chickens as an “agricultural use” either primarily or conditionally. Don’t be worried if your zoning prohibits slaughterhouses—there is a clear distinction.

In some US states it is legal to sell home-butchered chickens fresh off the farm on day of slaughter, but nowhere is it legal to butcher chickens at home for resale elsewhere. That requires further licensing that varies state by state. Check with your local extension office before selling any home-raised meat.

Killing an animal for the first time is an intense and sometimes scary experience. Learn from an experienced mentor, or find a good educational resource.

Ask around in your farm and homestead community to see if anyone has experience, or call your local extension office. Some extension offices also offer chicken slaughter equipment, like cones and a plucker, for daily rental. Farms or community groups sometimes offer workshops on chicken killing that give you hands-on experience and a chance to meet other chicken raisers.

Videos can walk you through every step of the process. This video demonstrates slaughter using the chop and has a helpful step-by-step on evisceration. Here is a video that demonstrates the slice with the cone.

The bottom line is this: Take steps to make yourself feel safe and comfortable with the process, whether that means learning from an expert or marathoning YouTube videos. Being calm and confident will make a cleaner, more humane slaughter, and an easier evisceration.

I personally find killing chickens to be an unpleasant but profoundly important experience which reminds me to be grateful for everything I eat, and meat especially.

However, slaughtering animals is not for everyone. Be honest with yourself about your boundaries and ask for help when you need it.