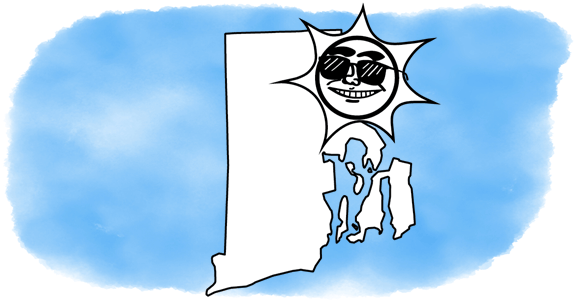 Going solar? Good call. It’s the right choice for your pocketbook and for the climate. If everyone in Rhode Island used solar power, it would take 8 billion pounds of carbon out of the atmosphere every year—according to the EPA’s greenhouse gas calculator, that’s the equivalent of planting a forest that would cover an area more than four times the size of the state.

Solar power is a growing part of the energy mix in Rhode Island. Nationally, the state ranks #32 in solar energy use.

The biggest advantage of solar energy? The cost—$0. For the average Rhode Island household, generating all their own electricity with solar would save $1,201/year. Also, you’re doing a favor for the next generation. Instead of relying on natural gas plants, supplied by fracking and offshore drilling, and dangerous nuclear plants, which produce most of Rhode Island’s electricity, you’ll be producing your own clean, renewable energy. In Rhode Island, residential customers like you account for 32.3% of the state’s total energy consumption.

The disadvantages: The cost of installation. The average solar installation costs around $20,000. Incentives like the U.S. Residential Renewable Energy Tax Credit can bring the overall cost down, over time. Rhode Island also exempts solar equipment from property tax, and provides grants for small-scale solar installations.

The average Rhode Island family uses 19,433 watts of energy on an average day. And, on average, they’ll get 4.25 hours of sweet Rhode Island sun each day. So, to get enough energy to keep the power running all night, they’ll need their solar power array to generate 4,572 watts of energy per hour while the sun’s out.

To figure out exactly what you’d need based on where you live in Rhode Island—and how much money you’d save—use this solar savings calculator:

Rhode Island was the first state to have an investment fund in renewable energy, the Rhode Island Renewable Energy Fund (RIREF), launched in 1997. RIREF funds solar projects and other renewables and is paid for with a surcharge on Rhode Islanders’ electric bills.

Rhode Island has an ambitious renewable energy portfolio standard: the state requires that 38.5% of the electricity sold there be renewable by 2035.

Like most states, Rhode Island mandates that its utilities provide net metering to their customers. Net metering deducts energy private solar/renewable operators have generated from the total cost of their utility bill and credits those small operators for any excess power generation that goes to the grid at large. Rhode Island recently expanded its systemwide net metering limit from 5 MW to 10 MW .

A 21 MW solar farm is planned for construction in Cranston.

In February 2017, Gov. Gina Raimondo signed S112 into law, an extension of the Renewable Energy Growth Program. The offer is a fixed pricing model for the purchase of solar electricity over a 15- or 20-year term. Maximum limit is 40 megawatts per year.

On June 7th, 2017, five students from the University of Rhode Island were the first students to graduate with a Certificate in Energy. The program was launched in early 2017.

ecoRI News is a Rhode Island is a pro-solar news outlet that covers energy issues in the state.