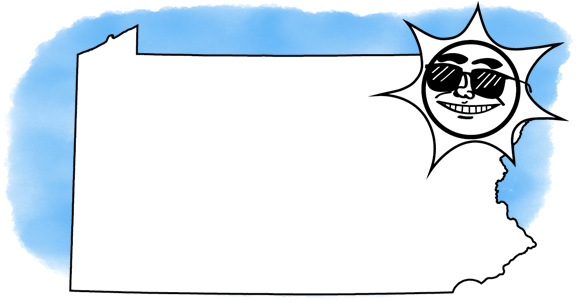 Going solar? Good call. It’s the right choice for your pocketbook and for the climate. If everyone in Pennsylvania used solar power, it would take 237 billion pounds of carbon out of the atmosphere every year—according to the EPA’s greenhouse gas calculator, that’s the equivalent of planting a forest that would cover an area more than three times the size of the state.

Solar power is a growing part of the energy mix in Pennsylvania. Nationally, the state ranks #15 in solar energy use.

The biggest advantage of solar energy? The cost—$0. For the average Pennsylvania household, generating all their own electricity with solar would save $1,365/year. Also, you’re doing a favor for the next generation. Instead of relying on CO2-spewing coal plants and dangerous nuclear plants, which produce most of Pennsylvania’s electricity, you’ll be producing your own clean, renewable energy. In Pennsylvania, residential customers like you account for 24.9% of the state’s total energy consumption.

The disadvantages: The cost of installation. The average solar installation costs around $20,000. Incentives like the U.S. Residential Renewable Energy Tax Credit can bring the overall cost down, over time. FirstEnergy customers can get rebates on the purchase of solar water heaters. The City of Philadelphia has established a streamlined permitting process and lower permit fees for solar installations.

The average Pennsylvania family uses 28,467 watts of energy on an average day. And, on average, they’ll get 4 hours of sweet Pennsylvania sun each day. So, to get enough energy to keep the power running all night, they’ll need their solar power array to generate 7,117 watts of energy per hour while the sun’s out.

To figure out exactly what you’d need based on where you live in Pennsylvania—and how much money you’d save—use this solar savings calculator:

Pennsylvania is middle of the pack in solar capacity and development, on par with peer states like Ohio and Illinois but lagging behind neighbors like New York and New Jersey due to its middling solar incentives.

Pennsylvania has a substantial renewable energy portfolio standard: it requires that 18% of electricity generated in the state be from renewable sources by 2020-1. At least 0.5% of all generation must be solar by 2020.

Like most states, Pennsylvania mandates that its utilities practice net metering. Net metering deducts energy private solar/renewable operators have generated from the total cost of their utility bill and credits those small operators for any excess power generation that goes to the grid at large. Pennsylvania’s net metering limit is low—only 50 kW for residential systems, very low for a state Pennsylvania’s size—and state agencies are litigating with other state agencies to expand it.

Pennsylvania’s clean energy efforts are led by the Pennsylvania Energy Development Authority (PEDA), which was established in 2004.

Frick Environmental Center is an events space and environmental education center in Pittsburgh that is net zero in energy use due to a solar photovoltaic generating system. The Center opened in September 2016.

WebLinc, a Philadelphia tech firm,
installed solar panels on its roof in 2014. The system provides 70% of the firm’s needed power.

Solar Impulse 2, the solar powered plane that circumnavigated the globe, stopped over in Pennsylvania in May 2016.

In March of 2017, the state Department of Environmental Protection launched a 30-month program to promote solar energy usage.

In June 2017, Estes Express Lines announced the completion of a 688 kW solar array in West Middlesex. The solar project was completed with Dynamic Energy on the Estes’ terminal.

In June 2017, Tuscarora School Board began the process to install solar panels for two schools. The state still needs to approve the construction of the 2.5 MW solar project.

Penn Future, PennEnvironment, and Pennsylvania’s chapter of the Solar Energy Industry Association are all lobbying against the anti-solar rules proposed by Pennsylvania state government and support other pro-solar measures.