There’s a charm to underground homes and so-called ‘hobbit homes’, but many former owners of such buildings have moved out due to problems with moisture and related conditions. But, earth might be the best insulator available, and it’s definitely the cheapest. Permaculturalist Paul Wheaton, owner of the forums at permies.com as well as richsoil.com, set out to design a new version of the underground home that retained all of the charm, but with greater affordability, fewer moisture issues, and all of the benefits of using earth as a way to retain warmth.

Wheaton’s design is heavily based upon designs initially published by Mike Oehler, and the works of author John Hait. Wheaton dubbed the technique “wofati.”

What Is A Wofati House?

Wheaton says that wofati is a portmanteau of these words:

More practically, it’s an unvarnished log cabin built into a hillside. It has big windows, an earthen roof, and plastic lining.

The wofati concept was first published by Wheaton in the 2000s, and as such, only a small handful have been built. Pictures below include both true wofati homes, built on the Wheaton labs property in Montana, as well as photos we’ve chosen to highlight other structures that share features with wofatis but may or may not qualify for the designation.

What Do I Need To Build A Wofati House?

According to Wheaton, a true wofati house meets the following criteria:

A wofati house needs to have all of those components, plus the following:

The inspiration for the wofati design was made by Mike Oehler in the 1970s for $50. This video from Paul walks through that home in the 2000’s:

Oehler turned into a big spender, though—he spent $500 on renovations later in his life.

Here’s a beta version of a replicable wofati house built in Montana by the permaculturists at Wheaton Labs:

Wofati structures are reminiscent of other underground homes, like this earthship, however the design strictly requires following rules that other structures may not follow – particularly in how rainwater and runoff is managed.

Located at the Findhorn Foundation, this building is the Nature Sanctuary where morning meditation takes place! While this house may not be a proper wofati home, it has many of the characteristics you might find in the entrance for one:

Wofati construction underway in Montana. As you can see, this proper wofati structure has plenty of incoming light and doesn’t reflect the damp and dark environment that you might encounter in other types of underground homes:

Solar collectors and wind generator for earth-covered deep-green residence. Rendering and design by Greg Madeen, Architect at Madeen Architecture and Construction L.L.C. Photo from deepgreenarchitecture.com. While this structure is cool and likely shares some characteristics with wofatis, the way it is built into a hillside most likely disqualifies it from wofati status. In Wheaton’s model, the rainwater runoff pattern for this structure would be troublesome: 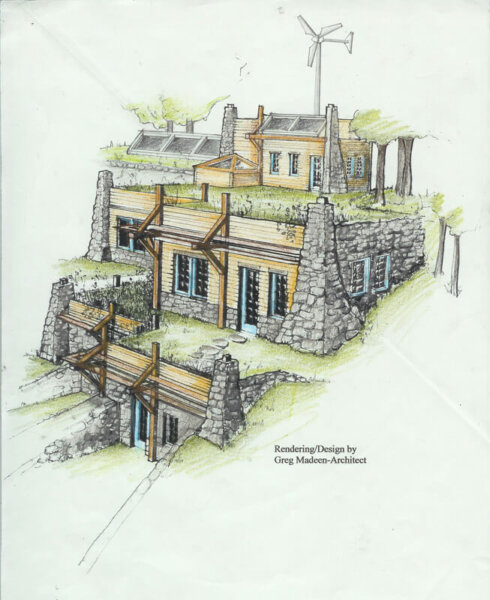 A cozy, rustic lakeside home with green roof that has many design elements of a finished wofati:

A beta version of a wofati house from Wheaton Labs:

The same house from another angle: