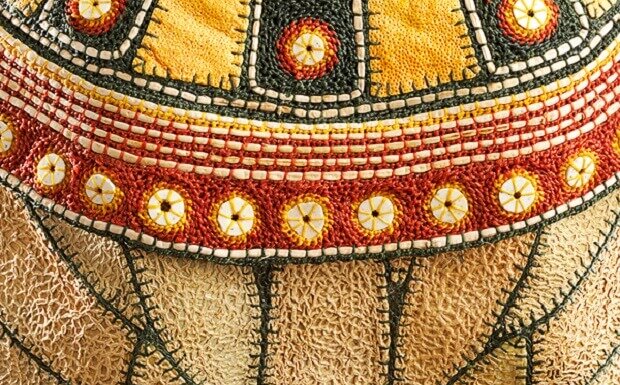 “Forbidden”, (2010) by Jan Hopkins.
Garden of Eden on the torso with lush leaves and ferns and a serpent that slithers from the apple on Eve’s stomach, up around her shoulders and rests on her left shoulder to whisper in her ear. The words written on the serpent are “Eat from the tree of knowledge of good and evil”. Grapefruit peel, cantaloupe peel, yellow cedar bark, ostrich shell beads and waxed linen. 18” x 15” x 9”.

Fruit skin teapot, as above.

Jan and her husband are currently working on a new series of works
dealing with the WWII Japanese American Internment that detained Jan’s family.

Statement: On Feburary 9, 1942, President Franklin D. Roosevelt signed Executive order 9066 ordering the internment of Japanese Americans. Jan’s family and all Japanese Americans living on the West Coast were ordered to leave their homes and relocate to Internment camps. Their lives were frozen in time, not knowing when or if they would return to their homes (This piece is currently in an exhibit at the Baum Fine Art Gallery in Oklahoma.)

Artist’s Statement: “This is a story my Mom told me about my brothers who were born shortly after war. At the tender age of 8 and 10, 11 years after the war, my Brother’s friend called out “Hey, let’s play war, you can be the Japs”. Bewildered at the thought of being the “enemy” my brother said in reply, “We don’t want to be the Japs.” Perhaps more bewildered than my brother, his friend replied “but, you are Japs”. Confused, my brother ran home and asked my Mom; “Mom, Delbert said I’m a Jap. I’m not a Jap, am I?” My Mom looked at him, taken back by his question, and then replied in a quiet voice “You are Japanese American”.” This piece will be on exhibit at Fuller Art Museum, MA starting April 16th.

All art by Jan Hopkins of Everett, Washington.

Jan has been represented in the past by:
Gravers Lane Gallery (Philadelphia) and
Mobilia Gallery (Cambridge, MA).