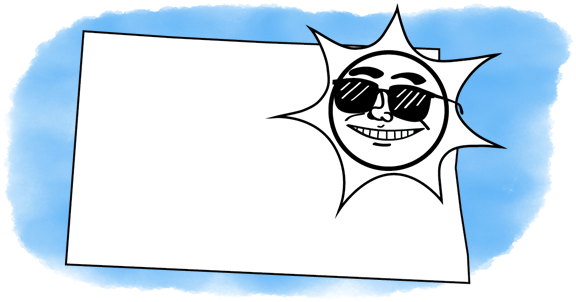 Going solar? Good call. It’s the right choice for your pocketbook and for the climate. If everyone in North Dakota used solar power, it would take 67 billion pounds of carbon out of the atmosphere every year—according to the EPA’s greenhouse gas calculator, that’s the equivalent of planting a forest that would cover more than half of the state.

Solar power isn’t yet a big part of the energy mix in North Dakota. Nationally, the state ranks #48 in solar energy use.

The biggest advantage of solar energy? The cost—$0. For the average North Dakota household, generating all their own electricity with solar would save $1,361/year. Also, you’re doing a favor for the next generation. Instead of relying on CO2-spewing coal plants, which produce most of North Dakota’s electricity, you’ll be producing your own clean, renewable energy. In North Dakota, residential customers like you account for 12.2% of the state’s total energy consumption.

The disadvantages: The cost of installation. The average solar installation costs around $20,000. Incentives like the U.S. Residential Renewable Energy Tax Credit can bring the overall cost down, over time. Also, North Dakota exempts solar equipment from local property taxes.

The average North Dakota family uses 41,333 watts of energy on an average day. And, on average, they’ll get 6 hours of sweet North Dakota sun each day. So, to get enough energy to keep the power running all night, they’ll need their solar power array to generate 6,889 watts of energy per hour while the sun’s out.

To figure out exactly what you’d need based on where you live in North Dakota—and how much money you’d save—use this solar savings calculator:

North Dakota is the lowest-ranked state (51st, including DC) in solar capacity, and did not install any significant solar capacity in 2015; its minimal renewable industry is geared more towards wind. Much of the state’s economy is based on fossil fuel extraction.

North Dakota isn’t very generous with its solar incentives, but there are a few.

New solar projects are eligible for a property tax exemption that lasts five years after the date of installation.

Two cooperative utilities in North Dakota teamed up to finish a solar farm in 2015, which has run for a year. It is one of few solar projects in the state.

A small solar project was installed in Fargo in July 2016.

In June 2017, the Standing Rock Sioux were awarded the Henry A. Wallace Award for their dedication to renewable energy.

In April 2017, Simle Middle School students developed a solar project that charges cell-phones for the homeless. By the end of the year, the school plans to place one of the solar-powered stations in Bismarck.

In June 2017, North Dakota State University held the STEM Boot Camp. Among the available lessons for students was the development of solar power conversion systems.

The North Dakota Alliance for Renewable Energy (NDARE) advocates for pro-renewable energy policy, but is largely focused on wind.