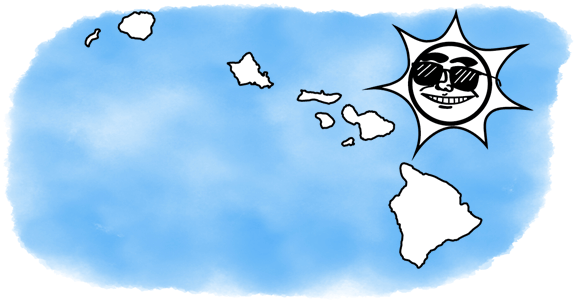 Going solar? Good call. It’s the right choice for your pocketbook and for the climate. If everyone in Hawai’i used solar power, it would take 15 billion pounds of carbon out of the atmosphere every year—according to the EPA’s greenhouse gas calculator, that’s the equivalent of planting a forest that would cover all of the state.

Solar power is a growing part of the energy mix in Hawai’i. Nationally, the state ranks #1 in solar energy use.

The biggest advantage of solar energy? The cost—$0. For the average Hawai’i household, generating all their own electricity with solar would save $2,251/year. Also, you’re doing a favor for the next generation. Instead of relying on petroleum plants, which produce most of Hawai’i’s electricity, you’ll be producing your own clean, renewable energy. In Hawai’i, residential customers like you account for 13.0% of the state’s total energy consumption.

The average Hawai’i family uses 16,867 watts of energy on an average day. But how much sun they’ll get to generate solar power depends on where on the islands they live. On Oahu, for example, folks in Kapolei get as much as 6.5 hours of sun per day—but on the windward side, parts of Kaneohe average just 3 hours of sun per day. The Kapolei family would only need to generate 2,594 watts of energy per hour of sun, but the Kaneohe family would need to generate 5,622 watts per sun hour. So, to get enough energy to keep the power running all night, a family in Kaneohe would need more than twice the number of solar panels.

How many would each family need? Assuming they go with 250-watt solar panels, the math is simple.

To figure out exactly what you’d need based on where you live in Hawai’i—and how much money you’d save—use this solar saving calculator:

Hawai’i is, in many ways, the perfect market for solar: it’s sunny and its energy is mostly imported fossil fuel. The state ranks highly in installed solar capacity, which continues to grow. However, resistance by utilities to solar installation, and limits on the power grid, has led to a backlog of rooftop solar installation.

Hawai’i has the most ambitious renewable energy standard of any state: the state’s goal is to run on 100% renewable energy by 2045. Hawaii’s green energy development is fostered by Hawaii Energy, a ratepayer-funded program that provides financial assistance for renewable and efficiency projects.

In 2015, Hawai’i replaced net metering for new solar generators with a package of new policies. Those new policies, “grid supply” and “self supply”, are much less generous to homeowners who produce solar energy than net metering. Rooftop solar producers in the grid supply category can only export energy to an aggregate limit of 25 MW systemwide—at that point, new users can no longer earn a rebate and must instead “self supply” their property through storage systems. Permits for systems amounting to the 25 MW limit have already been issued, meaning that new solar installers will need to be self-suppliers.

Hawai’i requires that no covenants can be made prohibiting solar installation. Hawai’i also has fast track interconnection standards for small generators.

Hawaii offers robust incentives for installing solar. Individuals and companies can claim a 35% credit for the cost of installation and purchase of solar equipment against their income tax. Solar water heaters are eligible for a substantial rebate. Farmers and aquaculturists are eligible for generous solar powerinstallation loans. GreenSun Hawaii backs loans for small solar projects by private lenders.

The state has a robust feed-in tariff program creates a subsidy for renewable producers. Feed-in tariffs compensate renewable generators for their energy by making up the difference between their more expensive renewable and the cheaper market rate; the tariff will scale down over time as more renewables come online.

Oahu’s first self-supply home came online in 2016. The house has storage capacity that allows it to be powered mostly by solar, with backup generation provided by the grid.

In 2017, Tesla installed a 13 MW solar farm called the Kauai project. It is expected to reduce 1.6 million gallons of fossil fuels.

Hawai’i’s branch of the SEIA (Solar Energy Industries Association), HSEA, is a critical organization in designing the state’s solar policy.

The Hawai’i Clean Energy Initiative is a government-funded nonprofit that seeks to build consensus across the private, government, and NGO sectors around energy policy.