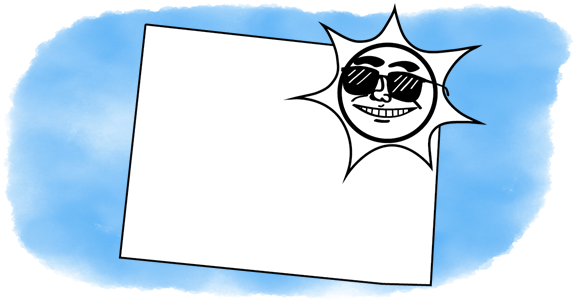 Going solar? Good call. It’s the right choice for your pocketbook and for the climate. If everyone in Colorado used solar power, it would take 88 billion pounds of carbon out of the atmosphere every year—according to the EPA’s greenhouse gas calculator, that’s the equivalent of planting a forest that would cover nearly half of the state.

Solar power is a growing part of the energy mix in Colorado. Nationally, the state ranks #9 in solar energy use.

The biggest advantage of solar energy? The cost—$0. For the average Colorado household, generating all their own electricity with solar would save $1,005/year. Also, you’re doing a favor for the next generation. Instead of relying on CO2-spewing coal plants, which produce most of Colorado’s electricity, you’ll be producing your own clean, renewable energy. In Colorado, residential customers like you account for 24.0% of the state’s total energy consumption.

The disadvantages: The cost of installation. The average solar installation costs around $20,000. Incentives like the U.S. Residential Renewable Energy Tax Credit can bring the overall cost down, over time. Most Colorado energy systems offer renewable energy rebates, and many cities exempt solar equipment from both property tax and sales tax.

The average Colorado family uses 22,900 watts of energy on an average day. But how much sun that family will see to generate electricity with depends on where they live. Parts of Pueblo average as much as 7 hours of sun per day, while in Boulder, you might see as little as 5 hours of sun. So, to get enough energy to keep the power running all night, the Boulder family will need to generate 4,580 watts per hour of sun, while the Pueblo folks will only need to generate 3,271 watts per hour. How many solar panels will each need?

Assuming they go with 250-watt solar panels, the math is simple.

To figure out exactly what you’d need based on where you live in Colorado—and how much money you’d save—use this solar savings calculator:

Colorado has ample policy incentives for users to install solar capacity, but still playing catch-up in actualizing that potential.

Colorado has a set of energy policies that are very favorable to solar, and the state is working to build out its considerable solar generation potential.

Colorado was the first state to pass its renewable portfolio by ballot measure; the 2004 measure mandates that 30% of private utilities’ generation come from renewable sources. The state also has a longstanding statute prohibiting covenants and homeowners’ associations from preventing the construction of solar power.

Like most states, Colorado mandates its utilities practice net metering. Net metering sends money back to homeowners who generate solar power. The electricity they use and generate is credited to their bill, and they get a rebate for energy they send back to the grid. Colorado’s net metering policy is very generous: it mandates that utilities allow small generators to roll over credits in excess of their usage from month to month. Utilities are required to estimate the cost of installation and interconnection of a solar system for its customers. Utilities with over 40,000 customers are required to provide their customers with the option to purchase Renewable Energy Credits. Utilities must inform customers about the fuel mix of the energy they purchase.

Colorado has a set of financial incentives in place to encourage solar development. The most prominent program is Colorado’s PACE program, C-PACE, which can be used to finance all upfront costs of renewable energy projects, including solar. The state has a fund that backs private lending for solar projects and makes up losses. Municipalities are also allowed to exempt solar projects from assessed property tax values and sales tax. Community solar gardens are exempt from property taxes as well, though larger solar projects are assessed for property tax.

A unique project in Montrose will use a community solar garden to net meter for low income households. Another project like it is launching in Colorado Springs.

A program in Denver will re-train people who formerly worked in the fossil fuel industry to instead install solar panels.

The Weatherization Relief Program has added 2 kW solar power to help low income families. The Colorado Energy Office hopes that the panels will reduce the utility costs for families in need.

In June 2017, Vivint Solar announced the extension of their solar services to Colorado. The expansion comes after a recent partnership with Best Buy.

The Sierra Club’s Rocky Mountain Chapter and Environment Colorado are deeply involved in efforts to expand renewables in Colorado.

SEIA also maintains an active chapter in Colorado, which is one of its policy target states.