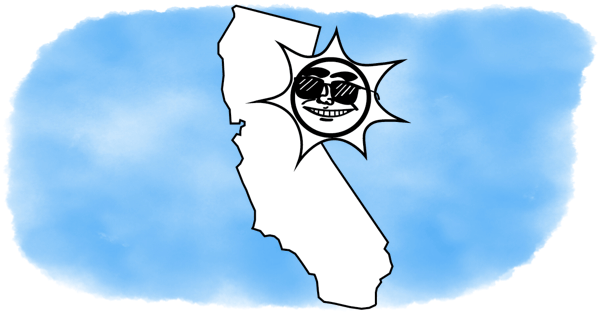 Going solar? Good call. It’s the right choice for your pocketbook and for the climate. If everyone in California used solar power, it would take 114 billion pounds of carbon out of the atmosphere every year—according to the EPA’s greenhouse gas calculator, that’s the equivalent of planting a forest that would cover nearly half of the state.

Solar power is a growing part of the energy mix in California. Nationally, the state ranks #4 in solar energy use.

The biggest advantage of solar energy? The cost—$0. For the average California household, generating all their own electricity with solar would save $1,095/year. Also, you’re doing a favor for the next generation. Instead of relying on natural gas plants, supplied by fracking and offshore drilling, which produce most of California’s electricity, you’ll be producing your own clean, renewable energy. In California, residential customers like you account for 18.3% of the state’s total energy consumption.

The disadvantages: The cost of installation. The average solar installation costs around $20,000. Incentives like the U.S. Residential Renewable Energy Tax Credit can bring the overall cost down. In California, low-income residents are eligible for help with upfront costs of solar installation. And any homeowner can apply for CaliforniaFIRST, which offers 100% upfront financing.

Assuming they go with 250-watt solar panels, the math is simple.

To figure out exactly what you’d need based on where you live in California—and how much money you’d save—use this solar savings calculator:

California, as its green reputation and sunny weather would suggest, is the leading state in solar capacity and a major center of the solar industry’s R&D and manufacturing sectors. The state has substantial residential and utility-grade photovoltaic projects, and substantial policy incentives to develop all of the above.

California has set ambitious goals for renewable energy. The state’s renewable energy standard sets a goal of 50% of retail electric production coming from renewables by 2030. Solar is a significant part of that effort.

The state’s new construction standards are also a major spur to solar production. California law requires that all new construction meet a net zero of energy consumption by 2020—that is, all buildings should produce as much energy as they consume. New, tougher statewide standards in support of that goal were announced in 2016. The standards are revised every three years.

The state’s solar efforts are promoted and coordinated by the California Solar Initiative (CSI)/Go Solar California, a state agency. Installation efforts are subsidized through CSI’s SASH, for single family homes, and MASH, for multifamily homes. Both programs subsidize solar installation projects for residential use on a sliding income scale. The state authorized PACE funding administered by local governments in 2008, some of whom have joined together to fund a PACE program called California FIRST. The state itself also provides PACE financing through Figtree PACE. Solar components are exempt from the state’s sales tax. As of November 2016, Los Angeles residents can get up to $360/year by allowing city-owned solar panels on their property.

Homeowners’ associations are not allowed to significantly impede solar installation in the state. Also, property owners may not plant or build in a manner that impedes a solar photovoltaic system. Installed solar systems are exempt from property tax assessments. Local licensing fees for installation are capped by the state at $500 for residential systems and $1,000 for commercial.

California, like most states, mandates net metering of systems up to 1 mw from its utilities. Net metering rebates homeowners who’ve installed solar for all the energy they create. Any energy they generate and use is credited on their bill, and homeowners get a rebate for energy they send back to the grid. Also, the state mandates that utilities must disclose the mix of power sources to their customers and the state. Private utilities must also contribute to a statewide renewable energy and energy efficiency seeding fund. The state has fast-track interconnection standards for its utilities.

In June 2017, EDF Renewable Energy agreed to a 500 MW power purchase agreement with Southern California Edison, the solar energy project will use 1,700 hectares of land near Desert Center, CA.

In 2017, Taft Union High School District plans to develop a 1.3 MW solar project. The project will save $6.2 million and reduce 35,000 metric tons of carbon emissions over the next 25 years.

The Center for Sustainable Energy, in San Diego, collaborates with utilities to integrate solar into their generation portfolio.

Solar California is an association of solar power companies, including manufacturers and installers.

Environment California educates the public on solar power and lobbies for pro-renewable energy policies on the state level.

NorCal Solar is a longstanding group that educates the public on solar power and advocates for pro-consumer solar policies.