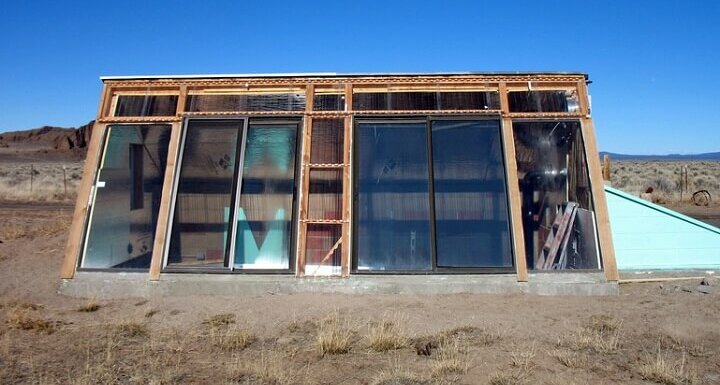 You are here: Home / Gardening / Underground Greenhouse: Uses and Benefits

At most latitudes, the temperature six to eight feet below the surface stays between 50 and 60°F. An underground greenhouse uses calm below-ground weather to keep plants growing whether it’s snowing or sweltering.

Designs for an Underground Greenhouse Underground greenhouse. The inside can be cased in stone, mud brick or any dense natural material able to absorb large amounts of heat. Cool weather crops like lettuce, kale and brocolli can be grown during winter in harsh climates. The glazing creates a “greenhouse effect.” If your water table is high, obviously that could spell disaster. You should build your greenhouse at least five feet above the water table. Mike Oehler’s underground greenhouse design. Mike digs a deep trench for access on the shaded south side which also allows cold air to sink and be warmed by the deeper, warmer soil. Many install tubes within the soil to transfer warmed air into the earth, yet Mike believes you need only the cold sink to allow the transfer in most climates. How to: motherearthnews. Mike Oehler’s book: The Earth Sheltered Solar Greenhouse Book. Underground greenhouse in Spetchley Gardens, UK. Stairs down to entrance on right. Image by Mezzapod via Flickr.
During the day, the earth walls store heat. The walls are the battery that release their heat at night. A properly-designed pit greenhouse is naturally warmed at night from five sides. In an above-ground greenhouse only one side, the floor, is heated during the day. A waterproof barrier extending along the periphery and down the berms are necessary. Here are a couple of earthbag underground greenhouse plans. Care must be taken waterproofing, draining and ventilating the greenhouse. The most efficient pit greenhouses have south-facing windows. The north wall stores heat. This earthen-walled underground greenhouse has lots of natural clay to absorb heat. The two most important factors in a pit greenhouse are the large amount of thermal mass (stone, soil, water), and its positioning toward the sun. Via organica.net.pl

17 Incredible Underground Greenhouses Around the World An underground greenhouse is called a walipini in South America, from the Aymara Indian language, meaning “place of warmth.” As you dig, you save your upper-most topsoil to serve as the bottom of the greenhouse. Use the deeper soil as the new berm on the north side (or south side if you’re south of the equator). Angling your window 90 degrees to the sun on the winter solstice will allow the pit to store the most heat during those days when the sun shines the fewest hours.

Here is a large walipini in LaPaz, Bolivia. At two minutes they go inside the walipini, at four minutes they walk around the outside. In Spanish. Obviously they do not get much rain there.

2) Pit Greenhouse Made With Local Stone An underground greenhouse made of local stone in Nepal at almost 10,000 feet altitude, where the temperature falls below freezing 199 days per year. This pit greenhouse in Mongolia is currently producing food during three seasons of the year. As the footprints show the entrance is on the opposite side. 5) Start Of A Homestead Walipini

At this homestead, the owners are beginning to dig for their underground greenhouse. Using the excavator will help cut down on the time it takes to finish the structure. A greenhouse built into a hill in Tennessee.

7) Walipini From Sandstone In Texas

This pit greenhouse is in Texas, it is essentially a hole dug into the ground. Here the soil was such hard sandstone, minimal wall support was necessary. The picture was originally listed at https://taroandti.com. Earth-sheltered greenhouse with earthbag walls in Patagonia. Note the use of plastic around the periphery.

9) Walipini From An Earthen Embankment

An underground greenhouse can help naturally insulate crops, enabling gardeners to harvest all year around.

A Nebraska couple turned an abandoned missile silo into an underground home. The walls are two feet thick—four feet thick in some places. The place where the missile was held is now the couple’s garage. They’ve covered the ground with wooden flooring and plastic turf. Their underground greenhouse is the only place where natural light comes through. In the (massive) greenhouse they are able to grow tomatoes, garlic, potatoes, and green beans.

11) Walipini With A Drainage Ditch Digging a shallow drainage ditch around the perimeter of the greenhouse will lead the run off water away from the structure. Via darfieldearthship.com Pit greenhouse. Many underground greenhouse owners store barrels of rainwater at the back of the greenhouse to soak up and store even more heat. Note the entranceway to right.

When you are deciding on materials, don’t forget to consider your areas climate. Choosing the wrong material could cause the roof to collapse and kill your crops.

14) Pit Greenhouse With Old Windows For A Roof

Walipini is another name for a pit greenhouse, this one is topped with old windows. See step-by-step photos of a greenhouse in New Mexico dug by hand!

16) Pit Greenhouse Made By Simple Ground

This man, from Simple Ground, shows us his underground greenhouse. He says that they were able to save money by bending the galvanized steel themselves. Their plan is to use aquaponics for the plants inside, he even shows the start of their fish pond inside. He describes the purpose of the underground greenhouse, and how it regulates the temperature to help plants grow all year around. They haven’t started growing anything yet, only because they finished building at the end of fall. This mud brick walipini in Ladakh which produces food year-round in a very harsh climate.

Many More Uses for Your Underground Greenhouse An easy way to warm up and bring light into your basement. Build a mini-pit greenhouse on the south side of your home. naturalbuildingblog.com A pit greenhouse for musicians.

Part 1 of a video series about the construction of an underground greenhouse, by Homesteadonomics. The builder says he’s doing it to extend his growing season, because he lives in an area with high winds, and because it seems like a cool project. He gets about 60% of the digging done by hand, a backhoe finishes the rest. Then he built a rough stairway, and poured a concrete footer. At the end of the video he does a nice job of showing what’s next. As of writing he’s in the middle of building; now he’s up to part 5. At the New Alchemy Institute bioshelter, fish tanks and compost heat the greenhouse and adjoining house. Water is dense and holds heat even better than rock, soil takes third place in heat storage. The solar aquaculture ponds are above-ground, translucent tanks. The fertile pond water was used for irrigating crops. Driftless Farm Greenhouse by Roald Gundersen, Wisconsin. The larger you build your pit greenhouse the more efficient, as the temperatures inside of a small greenhouse can fluctuate quite quickly. Earth Sheltered greenhouse by Hiroshi Iguchi, Japan. A greenhouse that obviously does not completely close. Via fifthworld-inc. Pit greenhouse attached to a home. Via solarinnovations.com. Semi-underground greenhouse surrounded on two sides with a stone wall and earth behind. Via solarinnovations.com.

This incredible “Greenhouse in the Snow” is in western Nebraska, close to the Colorado border, and when the video was filmed (early December) it had been 1 below zero the day before. Yet, in the greenhouse, lemons are ready to pick. Inside the greenhouse the temperature was in the high 70s during the day, and only fell to 38 F at night. Tomatoes were growing.

The greenhouse is 80 feet long, 16 feet wide, and 12 feet high. Russ Finch, the owner of the home, says, “the entire energy cost for the year is $600.” The video shows a lemon tree so lush, they have to prop up the branches to keep them from crashing. He also grows sweet Meyer lemons. He shows a Valencia orange tree, a peach tree, roses, papaya, grapes, kiwi, figs. He grows a lot of cactus, too. The heating system is entirely geothermal, his only heating system is a small unit that circulates air heated by the ground. Greenhouse built into a hill. Via solarinnovations.com Straw bales are a great insulator (an R-value of 1.5 to 3 per inch). Manure below ground will also help to keep these plants warm. Photo by Terrie Schweitzer, via flickr.

Cold frame of old windows and straw bales. Placing manure or compost down below the layer of topsoil will help keep the area warm.

How to Build an Underground Greenhouse: Resources

An underground greenhouse in Bozeman, Montana. As you can see in the video, there’s snow on the ground there. But in this completely underground unit, he’s growing peppers, radishes, chard, cilantro, basil and zucchini. He mentions that one day, even though it was 28 F outside, it got up to 117 F in the greenhouse (he forgot to throw open the doors). There is no outside heating, just a series of water barrels that help retain heat.

A clearinghouse of info on solar greenhouses from L. David Roper.

How Joseph Orr built a mud heat-storage solar greenhouse that even heats an adjacent room.

A step-by-step look at building a cinder block underground greenhouse.

Photos of a bermed, solar-heated greenhouse in Southern Idaho.

Step-by-step instructions and designs for a quonset hut style greenhouse made from chain link fence top railings. You’ll need a lot of land for this one.

If you’re okay with this, here’s how to build a greenhouse that’s heated by an adjacent chamber of compost.

What life is like at the Solviva greenhouse, where it’s 4 degrees outside but, inside the greenhouse, you can be plucking fresh tomatoes in 75-degree heat.

Best Books on How to Build an Underground Greenhouse

Cedar Built Greenhouses: Wood greenhouse kits, they will make a kit for your foundation

Build It Solar: For other solar greenhouse links