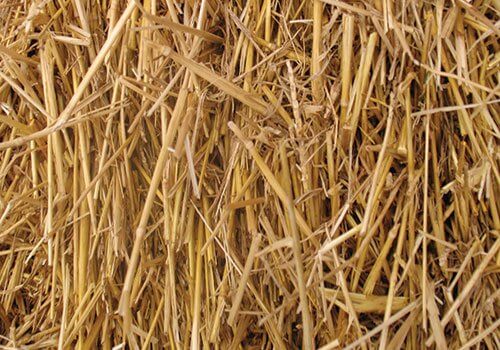 You are here: Home / Building / Using Straw Bale for Construction

Straw bale construction is a relative newcomer to the world of alternative building methods. It does not have the millennia-long history of cob or adobe, but it certainly has a viable place at the table of natural building methods.

Indeed, it has seen a surge in popularity in recent decades, and many people the world over are seeing the merits of building with straw bales. So let’s have a quick look at this building method and what it entails.

What Is Straw and What Are Straw Bales?

To start, let’s get some terms straight. Straw is the dried stems of a cereal grain once the grain itself has been removed. Straw can be made from any grass, but the main grasses used for straw production are wheat, barley, rye, and rice.

Once the grain heads are removed from the grass stems, the stems are compressed and bundled together into the familiar rectangular prisms known as straw bales. While it can be done by hand, in modern times it is done by machine which produces highly compressed bales of fairly uniform size.

The exact size of a bale varies by the machine performing the operation, but the most common size is bound by two strings and measures 14 inches high by 18 inches wide by 36 inches long. The 3-string bales (measuring 16 x 24 x 48) are also fairly common. In case you were wondering, the 2-string bales weigh approximately 50 pounds and the 3-string bales are about 80. However, the weight varies depending on how well compressed the bale is, the moisture content, and the type of grass used.

What Straw Is Not

This is important. You must know that straw is not hay. As already mentioned, straw is the dried stems of a cereal grain once the grain is harvested. Hay, on the other hand, is grass and other herbaceous field plants that are cut green and dried completely intact. As hay is composed of many different sorts of plants in various stages of growth, it will have a large amount of seed in it. This makes it very nutritious for the animals that eat.

In the realm of animal care, hay is for eating, and straw is for bedding. Just remember that hay is not going to be as good for building a house as straw, so make sure the bales you purchase are straw bales and not hay bales.

How to Build With Straw Bales

There are two main methods of utilizing straw bale for construction.

For smaller homes and structures, straw can replace the entire structure of the wall (framing, insulation, and sheathing). This makes the bales themselves the load bearing members of the wall and they will support the roof entirely on their own.

The second method uses wooden framing to support the roof and provide structure for the house. Straw bales are then placed between the members as infill or on the outside of the structure to form a continuous envelope around it. Timber framing lends itself nicely to the use of straw bales in this second method.

Regardless which of the above methods is used, the bale walls will need to be covered in a layer that prevents rain water from getting into the wall. The exact covering will depend upon personal preference and which method is used, but in any case, the walls must be carefully protected from water intrusion as this will weaken or destroy the wall.

When making an opening for a window or door in a bale wall, a wooden frame will need to be made. The challenge is attaching this framing to the bale wall itself. There are multiple ways of doing this, but it varies considerably with the exact design you are using. Of course, the easiest is when the bales are used as infill because the window framing can be directly attached to the structural framing of the house. In a wall made of only bales, the window framing will usually have protrusions at the top and bottom that will fit between layers of bales. When the bales are all in place, the window framing is rigid.

A straw bale has a high insulation value because it is made up of many individual stems of grass bundled together. The grass stems themselves are hollow, which allows them to hold air (a great insulator). Tests conducted on straw bales have shown that the R-value for this building material falls somewhere between 1.5 to 2.0 per inch. The main cause of variation in the measurement is from the way the bale is laid. When laid flat, the ends of the stems face outward which make it slightly less insulative than when the bales are laid on end so that the stems face up and down. However, for the stability of the wall, the bales are usually laid flat even though the R-value is lower.

While a straw bale wall has an impressive R-value (about R-26 for an average 2-string bale wall), you also need to take into account its thermal mass to get a complete picture of how well it performs in extreme temperatures. Its thermal mass is not as great as that of a rammed earth or stone wall, but it is certainly greater than that of your average stick-framed house with fiberglass batt insulation. This thermal mass will help prevent sudden and drastic temperature changes as the outside air will have to heat or cool the entire mass of the wall in order to influence the interior temperature.

Straw is a byproduct of the grain industry. If you live in an area with a lot of grain production, straw will be both abundant and cheap — especially right after harvesting season. Straw harvested far from the building site and trucked across the country makes it somewhat more expensive, but it is generally quite affordable when compared to other construction materials.

Little is more sustainable than grass. It is an abundant and completely renewable resource that grows pretty much everywhere. As opposed to wood, which takes many decades to get to a usable size, grass takes a single season to mature. No fossil fuels are required to dry the grass as the sun does that work for you. Unless it is being shipped across the country, straw is about as sustainable as it comes.

Many construction materials are produced using chemicals that are harmful to human health. Some of these materials will also off-gas volatile compounds into the interior atmosphere of the home which adversely affects the health and wellness of those inside. No harmful compounds are off-gassed from straw. No irritating chemicals are leached onto your skin when you handle the bales, and even if you happened to ingest some, it wouldn’t do anything but add some fiber to your diet. It doesn’t get much more nontoxic than straw.

Some Important Considerations When Using Straw Bale for Construction

This is probably the most important of all design considerations. Straw bales must be kept dry at all times. This is because wet bales means rotting bales. While a dry bale can last pretty much indefinitely, a wet bale will quickly decompose. So they must be kept dry from the very beginning. This starts before you come in contact with the bales yourself. You must first ensure the farmer did not leave the bales exposed to rain in the field. Then, once you have the bales, you need to either keep them under a tarp, or preferably, inside a building. And during construction, they must be kept dry.

Dry Feet and a Wide Hat

This is pretty much an extension of the first consideration, but be sure to protect the bale walls from moisture that comes from above and that which comes up from below. A roof with wide eaves and overhangs will help prevent rain from contacting the walls. You also need to prevent any moisture from wicking up from the ground. First, the bales need to be on a foundation that is raised off the ground. If this foundation is capable of directing water up from the ground (like concrete does), then the bales will also need to be isolated from the foundation with a layer of plastic or closed cell insulation.

As with most alternative building methods, getting a building permit can be a challenge in some areas. Either move to an area where there are no building inspectors or learn to work with the one in your area. Realize that some are more open-minded than others. Also know that straw bale homes have been built in major cities, so there is hope of building one in your town, too.