Have your feet ever turned blue, or black, or red from a pair of shoes or sandals? 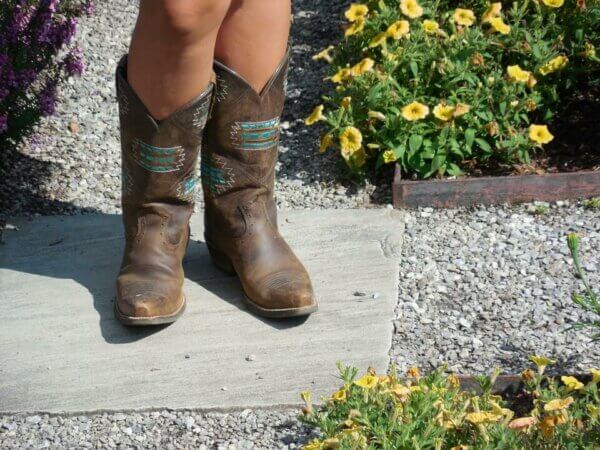 Even Traditional Leather Tanning Was Toxic

If you have ever driven or walked near a leather tannery you know something foul is going on in there.

Tanning hides is an ancient practice and can be traced back as far as 7000 BC. It has been, and still is, a noxious process that has always been relegated to the outskirts of town, now it’s relegated to developing countries. Before tanning even takes place, the flesh and fat and hair need to be removed from the animal skin. Before chemicals and metals were used, ancient tanners would soak and then pound and scour the skin to remove flesh and fat. Next, the tanner would remove the hair fibers by soaking the skin in urine, or applying an alkaline lime mixture, or simply allowing the skin to putrefy for several months, then immersing it in a salt solution. After the hair fibers were loosened, the tanners scraped the hair off with a knife.

Once the hair was removed, the tanners would pound dung into the skin. Dog and pigeon dung was favored. Sometimes the dung was mixed with water in a large vat, and the prepared skins were kneaded for hours in the dung water until they became pliant. In cities, children were employed to gather dung and pee pots were ubiquitous street side. What an occupation!

After cleaning and kneading, the hides were tanned to soften them, preserve them, and make them water resistant. Skins are stretched on frames and soaked for several weeks in vats of increasing concentrations of tannin. Tannin is a plant compound found throughout the plant kingdom. In the tree, tannin is what protects the bark from fire, bugs and bacteria. Tannin found in specific tree bark, such as oak or chestnut bark, is the choice of tanners. That was the old days.

Nowadays, 80-85 percent of tanned leathers are processed using chromium. And due to the tanning businesses’ disliked odors and waste, leather processing is often located in developing countries where environmental restrictions are lax. Currently, leather shoes are soaked in a chemical cocktail prior to appearing on your feet, and can be hazardous during the whole life cycle of the shoe.

A study done by the Swedish Society for Nature Conservation tested twenty-one pairs of brand-name shoes manufactured in various countries. They were analyzed for a number of metals and organic compounds. The metals analyzed in the study were arsenic, cadmium, chromium, cobalt, copper, lead, mercury, nickel, and zinc. High levels of trivalent chromium were found in all the shoes. All but one shoe, contained high levels of mercury. All of the other metals were found in varying degrees in all of the shoes. 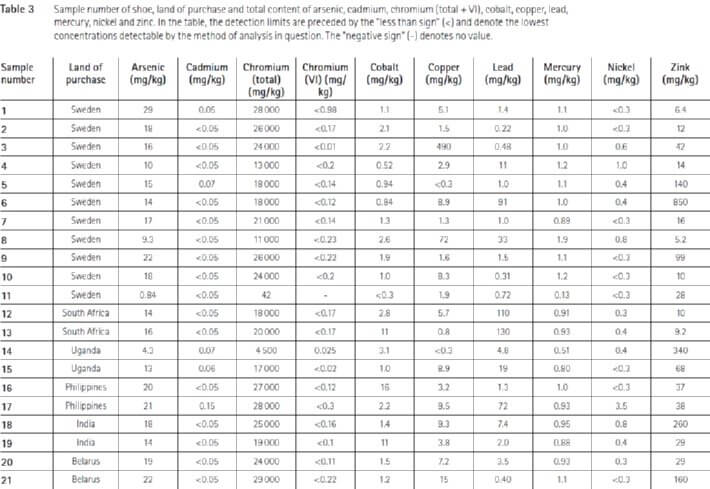 www.naturskyddsforeningen.se
Also found were organic compounds either used for tanning, dying or preserving the leather.

The Toxins In Leather Tanning Hurt Us And The Environment

Many of these metals, dyes and organic compounds can easily cross the skin barrier if one perspires in one’s shoes. Blisters and cuts on the foot may enhance the uptake.

Not only should we worry about our feet, but when we landfill our leather products these toxins could leach into our drinking water. Incineration is no better, as many of these compounds when mixed with other organics, become even deadlier. Trivalent chromium may oxidize into carcinogenic hexavalent chromium. Combustion of halogenated compounds, such as chlorinated and brominated phenols, may result in formation of dioxins and furans. Metals are not destroyed upon incineration, but volatilized, and subsequently condense to form sub-micron metallic particles which easily become airborne. Even early on, mining of chromite ore for trivalent chromium produces waste containing the toxic hexavalent chromium. And of course, the copious, caustic wastewater resulting from the tanning process itself, has been a serious issue for many, many years.

What You Can Do 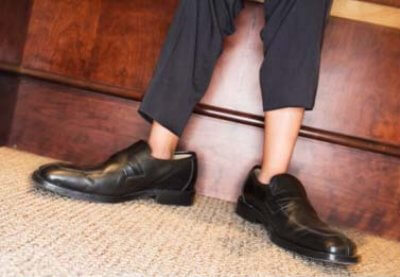