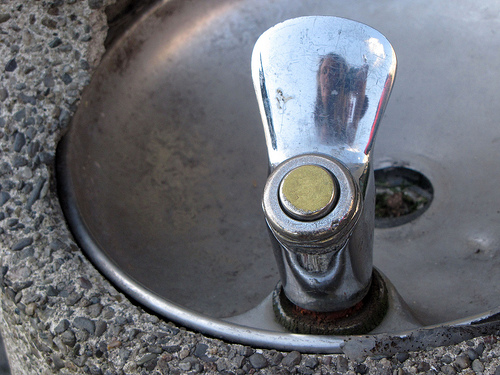 Want to ditch the bottled water but aren’t sure where to find free sources of H20? Yeah, there’s an app for that.

Late last month it was announced that Google and the Pacific Institute are teaming up to create a smartphone application that will allow users to share locations of public water fountains in an effort to combat bottled water consumption.

Dr. Peter Gleick, President of the Pacific Institute recently wrote an article for SF Gate in which he discussed the fact that public water fountains seem to be going the way of the dinosaur while vending machines hocking $2 bottles of water have popped up everywhere.

The average American now drinks nearly 30 gallons of commercial bottled water per year, up from 1 gallon in 1980, creating plastic waste and wasting energy. One of the reasons for this explosive growth in the sales of bottled water is the disappearance of public drinking water fountains.

To remind people that drinking tap water from reusable containers is the cheapest and most environmentally-friendly way to stay hydrated, Gleick and his organization are partnering with Google to create “We Tap,” an app that will allow smart phone users to add the location, condition, and quality to a national database of fountains. The uploaded data, and a photo, will be accessible to WeTap users who are looking for a drinking fountain in that area  (Treehugger).

If you have an Android powered smart phone, a gmail account and Picasa account (hey, Google’s gotta get something out of it too) and a willingness to try out some funky-looking water fountains, the We Tap team would love your help creating and mapping the initial database. Find out how to contribute to the We Tap Map here.

Tell us: Do you drink from water fountains? Why or why not?