You are here: Home / Food / Food Industry / What if You Woke Up Tomorrow and Cinnabon Was Vegan? 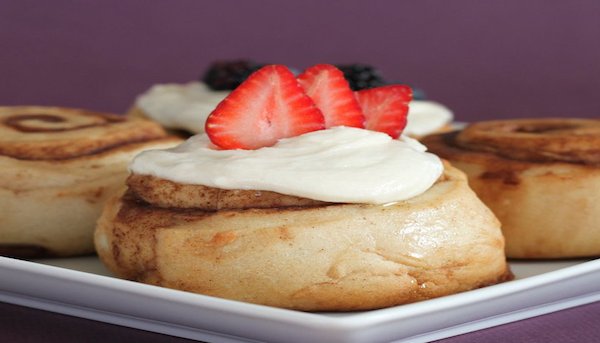 I’ve never eaten at (or a) Cinnabon. I’ve smelled the cloying aroma wafting through shopping malls inappropriately mixing with department store perfumes and greasy Sbarro pizza. It offends me not just as a vegan who can’t eat anything at a Cinnabon, but also as a human being who prides myself on my ability to not face dive into gobs of white flour and sugar in the name of something resembling a breakfast food.  We need Cinnabons on earth about as much as we need the shopping malls they live in.

That is, until the news of a vegan Cinnabon-like chain called Cinnaholic. What?

According to Ecorazzi, Cinnaholic, the Berkeley, Calif. –based bakery is now offering nationwide franchising opportunities.

“Shannon and Florian Radke opened their first Cinnaholic store June 2010. The bakery became an overnight success with its mouthwatering vegan cinnamon rolls and a gazillion choices of frostings and toppings,” reports Ecorazzi. “The company has also been a media sensation – recognized in many prominent publications and having the honor of winning multiple “Best of” awards.”

Now, the company is seeking to “bake” things up a notch, with nationwide expansion plans. And why not? Babycakes, the Lower Manattan-based vegan and gluten-free bakery has seen tremendous success in expansion efforts. The Radkes hope their start-up franchise package will help spread the delicious vegan message across the country.

And while all sweets should probably be eaten in moderation, there are major differences between a Cinnabon pastry and  one that’s made without the addition of milk, eggs or butter. “We believe that every one of us has the power to make a positive change in this world for the animals, the planet and the people. We start by serving delicious vegan cinnamon rolls,” said the husband and wife team.

So if you simply have to indulge your sweet tooth, now you don’t have to do it at the expense of an animal. That’s extra sweet.