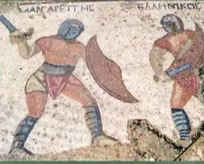 You are here: Home / IG / Gladiators Were Vegan

Archeologists recently unearthed a burial site in Turkey containing the bodies of 60 Roman gladiators. Tests to their remains led researchers to conclude that the gladiators all ate an exclusively-plant-based diet. In fact, they used the word “vegan” to describe the gladiators.

In the following video John McDougall MD describes the new find on gladiators and we learn the entire Roman army went on a vegan diet whenever they went into battle.

Dr. McDougall shows how every major successful culture throughout history has relied on a largely starch-based diet to be successful.