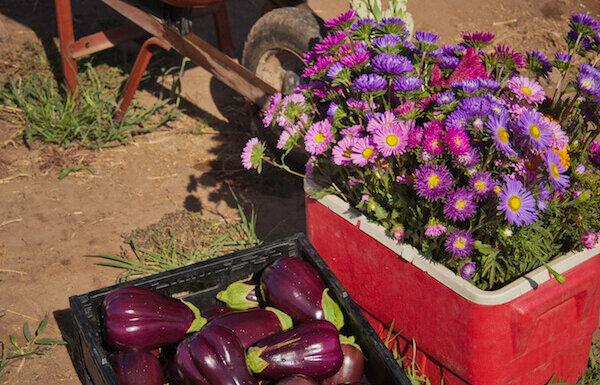 If you enjoy grilling outdoors, eggplant is a must in the homestead garden. Companion planting and a bit of effort will help ensure a bountiful harvest of succulent, sun-blessed orbs. During the height of the summer season, you will harvest several eggplants a week. Plant a few more, and they are a profitable cash crop to sell at the fresh market.

What Is Companion Planting?

Numerous horticulture research studies support the age-old wisdom of companion planting. Companion planting is a gardening method of placing plants that support and encourage the growth and well being of other plants, close to each other.

Environmentally and health conscious gardeners cultivate organically grown foods: eggplant is no exception. Wishing to avoid exposure to toxic herbicides and pesticides, they choose to practice gardening methods that rely on nature, common sense, and a vigilant attitude to manage their garden production. Companion planting is a key ingredient in an overall gardening modality that is good for people, pets, plants, and the planet.

For centuries, in many parts of the world, eggplant was grown strictly as an ornamental plant for its attractive foliage and eye-catching fruits. Within the flowerbeds, eggplant was paired with companion flowering plants.

Mexican marigold, nasturtium, snapdragons, and sunflowers repel aphids, white flies, flea beetles and ants. Nasturtium is also an excellent dense ground cover as well as a vining edible plant that ward off many types of crop-munching insects. Both the flowers and the leaves of nasturtiums are consumed in salads or used as an attractive plate garnish.

Legumes (peas and beans) enhance garden soil by converting nitrogen in the air, into nitrogen in the soil. Planting bush beans next to eggplants is also an effective method of keeping the Colorado potato beetle from decimating the garden crop. If you plant trellis growing peas or beans, be sure to plant them in a location where they will not shade eggplant: eggplant demands full sun for optimum growth, texture, and flavor.

Hot peppers are a good neighbor to eggplant and most other garden vegetables. Hot peppers emit a chemical from the plant roots that helps prevent Fusarium, root rot, and a wide range of other plant diseases.

Eggplant can be somewhat prone to insect attacks. Strongly scented herbs such as thyme, rosemary, chamomile, lavender, horehound, oregano, sage, basil, tarragon, and all varieties of mint help repel insect invaders repulsed by the pungent herbal scent emitted by the herbs. Thyme is especially effective against garden moths and aphids.

Savvy homesteaders plant herbs for medicinal and culinary use, to protect other plants, to attract pollinators, and to sell as a cash crop at their local farmer’s market.

Catnip is another plant that will keep flea beetles from infesting your garden. However, catnip negatively impacts he growth and development of peas and beans, so keep these two combative plants apart from each other.

Eggplant and spinach are good companions as the taller eggplant shades tender young spinach while spinach helps conserve moisture in the soil while suppressing weeds. Spinach is an attractive edible ground cover in any sunny location in the garden.

Potatoes, tomatoes, tomallitos, and chili peppers, like eggplant, are all members of the nightshade family. As family, they are compatible and supportive companion plants to commingle with eggplant.

Native to China and India, eggplant (known as aubergine in the U.K. and Europe) is part of the nightshade plant family Solanum melongena. Cultivated today for its tasty edible fruit, eggplant is a nutrient-rich vegetable packed full of nutrition, fiber, and flavor. In South America, the shiny purple summer vegetable is known as brinjal. Fairly easy to grow, eggplant can be enjoyed raw, cooked, steamed, sautéed, grilled, and fried.

Cultivated in China since the 5th century B.C., eggplant was a food staple in Africa before the middle ages. While early varieties of eggplant were rather bitter, newly developed varieties are sweet and creamy, making them an excellent addition to the homestead garden.

Today, China, Japan, Turkey, Egypt, and Italy are the largest growers and consumers of eggplant. Eggplant is an esteemed component of the Mediterranean diet and is a favored ingredient in many culinary preparations in France, Italy, and Greece. Eggplant presents a pleasing, slightly bitter taste and a soft, sponge-like texture.

Eggplant (Solanum melongena L.) is a close relative of potatoes, tomatoes, tomallitoes, goji berries, and peppers. For hundreds of years after eggplant’s introduction to Europe, the bitter nightshade plant was reserved as an attractive landscape decoration.

The fruit was considered poisonous and said to cause dementia and insanity. For centuries, tomatoes carried the same undeserved erroneous reputation as a poisonous plant.

Eggplant is available in a diverse array of cultivars including a wide range of hybrids. An edible ornamental plant, eggplant is typically a purplish-black in color and elongated or teardrop shaped.

Propagated from seed, eggplant does best when started from transplants. A cold-sensitive plant, eggplant should not be set out in the garden until the soil has warmed and all danger of frost is passed.

Similar to tomatoes, eggplants suffer injury at low temperatures and fails to flourish until soil temperatures warms. Before moving transplants outdoors, it is important that seedlings be hardened off by reducing temperature and water.

When planting eggplant, choose a sunny location with loamy, well-drained fertile soil. Eggplant isn’t too picky, and will manage to grow in most garden conditions as long as the days are warm with plenty of sunshine.

To prepare the soil for planting eggplant, work the soil well, removing rocks and roots. Eggplant is a heavy feeder. Before planting, integrate a generous amount or organic compost or well-aged herbivore manure (e.g. sheep, goat, horse, or cow) into the soil to add additional nitrogen and other vital nutrients.

Like other members of the nightshade family of plants, eggplant presents a sturdy vine with fruits hanging from it much like tomatoes. The eggplant reaches several feet in height at maturity. Plant seedlings approximately two feet apart in a row. Space rows three feet apart.

Once established, eggplant is fairly drought tolerant, thriving in the heat of summer. However, for optimum production, flavor, and texture, provide the plants with a minimum of one inch of water per week. To do its best, eggplant requires six to eight weeks of nighttime temperatures around 70 degrees Fahrenheit.

As your plants mature, you will soon see why eggplant needs support. Eggplant can grow up to six feet tall. The ripe fruit is large and heavy.

Fruits vary in size, with larger varieties producing fruit that weighs up to a pound each. Without support, heavily laden plants bend and break. Keeping the fruit, especially elongated varieties, up off the ground helps prevent plant disease, defines fruit shape, and makes harvesting easier. Anticipate an abundant crop when choosing support (cages or trellis work well) or staking for your eggplants.

When selecting eggplants for harvest, fruits should be solid and heavy for their size. No matter the variety or if the mature fruit is white, purple or green, the skin should be smooth and shiny without evident bruising or decay.

To determine if the fruit is ready for harvest, gently press the fruit with the pad of your thumb. If the spot bounces back it is ready to pick. If the indentation remains, the fruit is not yet ripe. Eggplant tends to bruise easily. Handle gently when harvesting.

Eggplant requires approximately 110 days to reach maturity. The crop is harvested across an extended period, until cold temperatures or the first frost inhibits growth.

Field Performance of Bt Eggplants (Solanum melongena L.) in the Philippines, US National Library of Medicine – National Institute of Health