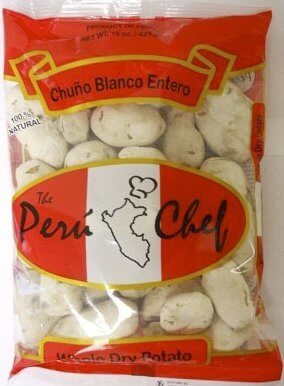 How The Incas Made Chuño

The process for making chuño is an amazing technological breakthrough that only works in high desert. Dig up some potatoes. Leave them outside overnight. They’ll freeze. During the day, as the powerful desert sun hits them, they’ll start to defrost. Walk on them, squeezing out their moisture. Leave them out to freeze again, then repeat the process.

After a few days, the potatoes will be moisture-free. Also, since the sun and stomping has broken down the carbohydrates in the potato, they’ll have triple the energy content than they did raw. After one last night of freezing, you store what’s now chuño in permanently frozen underground barrels. It can keep for up to six years.

Why Chuño Was So Important

When crops failed, Incans ate chuño. Travelers brought the food on mountainous hikes on the 15,500 miles of roads connecting the empire’s temples and cities. According to the Encyclopedia Britannica, a Spanish conquistador reported feeding 2,000 troops for seven weeks on chuño from nearby warehouses.

To eat it, you’d prepare chuño the same way you use the dried mushrooms you can buy at the grocery store—reconstitute them in a little bit of water, then serve however you please. Travelers could stop, boil a small pot of water, and chomp enough chuño to give them the energy to keep going.

Modern-day cooks use chuño is in the Peruvian dish carapulcra. This delightful video shows how to make it.

You’ll have noticed that this wonderful family recorded their video in both English and a second language, Quechua. This official language of the Incan empire is still widely spoken in Andean countries, and remains an official language in Bolivia and Peru. One Quechua word made it into the English language, and it comes from another dried food. “Ch’arki” is the Quechua word for dried meat—what we call “jerky.”

Chuño wasn’t just a food. Incans used it as money and medicine, too. The Inca developed more than 3,000 varieties of potatoes, there were probably as many types of chuño as we have types of cheese.

Proponents of the heirloom seed movement are resuscitating this lost potato diversity. And potatoes aren’t the only edible Andean root worth growing. This excellent post by seed cultivar Bill Whitson goes deep on Andean root vegetables like yacon, ulluco, and oca, which when dried is even more nutritious than chuño. Bill sells some of these seeds on his site Cultivariable.