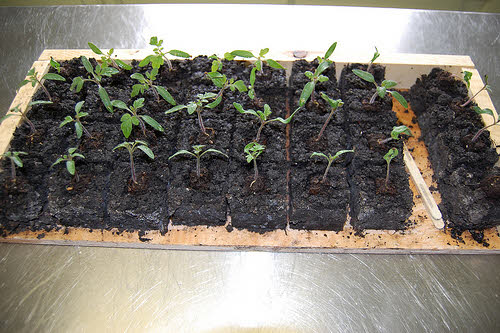 I’ll admit it: until last week, I didn’t know about the concept of starting seeds in soil blocks (instead of containers). Mother Nature Network made the introduction, and my initial response was, shall we say, positive. After just a little poking around, I discovered two things: 1. you certainly can buy a soil block maker (or “blocker”) for a relatively reasonable price (and, yes, that’s an affiliate link), and 2. lots of people have created plans for making blockers, often from reused materials.

So, go ahead and spend that $30 if you’d like… or get creative with one of these ideas for making your own soil blocker.

1. Turn a Soup Can into a Soil Block Maker

Opened up a can of soup or beans lately? Then you’ve got the first material needed for this DIY blocker. You can probably rustle up the other materials around the house, also.

Need something smaller? Pill bottles can work – just make sure to wash them out well beforehand. JBest at the Helpful Gardener forums shares his plan (along with before and after pics). Another one for which you may have the materials laying around the house.

No doubt – PVC is nasty stuff. But, as I understand it, it does the most harm after disposal. So, while you may initially think “I don’t want to use that stuff  in combination with food production,” this plan from Steve Howard at FarmCastNetwork.com might be a more sustainable option than tossing out that used PVC pipe (where it can leach into soil and water).

4. The Soda Can Soil Blocker

Like previous plans, this one from DaveNJ at Instructables makes good use of materials you might otherwise throw out. Additionally, Dave walks you through the whole process of making soil blocks – there’s also a recipe for potting mix here.

Finally, this last plan for single block maker from PottingBlocks.com takes all of its materials from the local hardware and/or building supplies store – but it’s still cheaper than buying a blocker. A little more PVC here – if you’ve got ideas for alternative materials, share them.

Of course, you’ve probably already noticed the main difference between the product you can purchase, and many of these DIY plans: the one you buy lets you make multiple blocks. This hasn’t gotten away from the DIYers completely, though: jbest123 (whom I’ve got a sneaking suspicion is our jbest above) share photos of his multi-block maker that uses soup cans (that’s one of them above). The instructions are largely lacking, so you may want to spend some time with our last plan for pointers.

If you want a soil blocker that looks good while pumping out multiple blocks for starting those seeds, here’s your plan. Instructables member spike3579 provides a very thorough nine-step walkthrough (via Treehugger)

Ready to build a soil block maker? Know of another plan that you like? Share your thoughts with us.

UPDATE: Reader Matthew Farnell has created his own soil-blocking system with materials he found around the house.  I’ll have to find out the size of the salt box he uses for the larger blocker; overall, though, a really interesting approach:

Still want to use pots? Why not make your own?