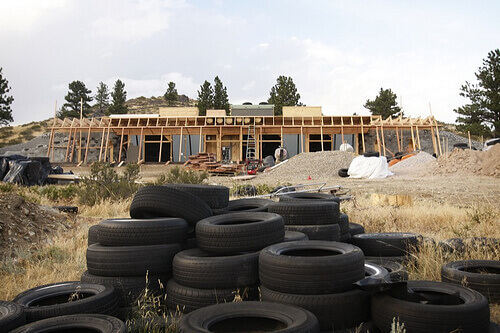 You are here: Home / Technology / Building with Tires for Energy Efficiency and Disaster Resistance

Scrap tires have been a disposal menace for decades: the EPA notes that “There are at least 275 million scrap tires in stockpiles in the U.S.,” and in 2003 (the last year for which there are figures, I assume), approximately 290 million scrap tires were generated.” Yeah, that’s a lot of tires. State and local governments have recognized the costs created by this particular form of waste — they take up lots of landfill space, serve as breeding grounds for mosquitoes, and create ugly fire hazards — and acted accordingly with recycling mandates and landfill prohibitions. Now, recycled tires are likely to be used in everything from playground and road surfaces, to erosion control installations, to mulch for your garden.

All of these uses take advantage of strong, durable, and readily-available material. They also require quite a bit of processing, though: tires generally have to be ground up (though “rough shredded tires” can be used as-is for certain civil engineering projects). The strength and durability of tires also make them attractive as a building material… and, usually, this requires relatively minimal processing (if any at all). Forward-thinking designers and builders have used tires to meet a number of goals for greener, more resilient buildings.

Building With Tires For Energy Efficiency

Used tires aren’t only pretty cheap (in some cases, free); they’re also ready to use for high insulation factor building projects. Michael Reynold’s Earthship concept, for instance, uses old tires as “bricks”: they’re filled with earth that’s pounded in to create strength and stability. It’s a labor-intensive process, and no doubt the resulting bricks are pretty heavy; the result, though, is much more thermal mass than found in ordinary construction, which creates much higher insulating factor.

The tire bale concept also turns these “waste” materials into a building materials with high thermal mass. Using a hydraulic press, tires are compressed into “big rubber bricks” of 2-1/2′ x 5′ x 4-1/2′ (which weigh about 2000 pounds). Walls built from these bales also have a high insulation value: a Colorado School of Mines study predicted an R-value of “40.0 – 41.6 for a 60″ tire bale wall… about 3x as much insulation as goes into a standard 4″ stud wall.”

Building With Tires For Disaster Resistance

A earthquake-resistant house designed by the Indonesia Aid Foundation, for instance, used tires for the home’s foundation to provide a “buffer zone” between the shaking earth and the house. Colorado State University tested this design and another on a seismic shake plate, and the building was able to resist progressively stronger quaking.

The patented Tire Log by Re-Tread Products of Great Valley, New York, is another option for disaster-resistant housing that takes advantage of tires’ flexibility. In this case, designers use the logs as a ground-level buffer as in the Indonesia Aid Foundation design, but also for the walls of the building (much like a traditional log cabin). Take a look at how this building material is manufactured:

The short answer: yes. The longer answer is more complex: tires need to be exposed to light for breakdown to occur, but the Earthship and tire bale building models covering them in earthen plaster. Similar questions have arisen concerning the leaching of chemicals into groundwater: studies on the use of old tires for landfill lining suggest the threat here is minimal (especially when compared to other materials and chemical compounds). Earthship Biotecture and Touch the Earth Construction (which both have horses in this race, so to speak) address these issues and studies conducted on them.

Know of other building models or concepts that make use of old tires? Share them with us in the comments.