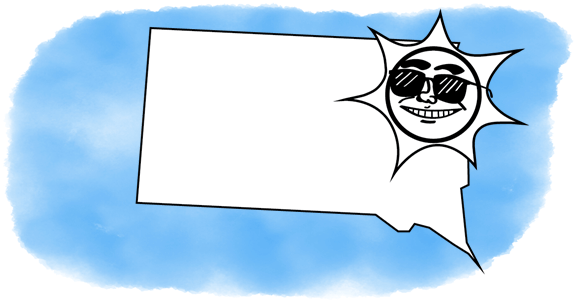 Going solar? Good call. It’s the right choice for your pocketbook and for the climate. If everyone in South Dakota used solar power, it would take 7 billion pounds of carbon out of the atmosphere every year—according to the EPA’s greenhouse gas calculator, that’s the equivalent of planting a forest that would cover 5% of the state.

Solar power isn’t yet a big part of the energy mix in South Dakota. Nationally, the state ranks #49 in solar energy use.

The biggest advantage of solar energy? The cost—$0. For the average South Dakota household, generating all their own electricity with solar would save $1,313/year. Also, you’re doing a favor for the next generation. Instead of relying on habitat-destroying hydroelectric power dams, which produce most of South Dakota’s electricity, you’ll be producing your own clean, renewable energy. In South Dakota, residential customers like you account for 18.6% of the state’s total energy consumption.

The disadvantages: The cost of installation. The average solar installation costs around $20,000. Incentives like the U.S. Residential Renewable Energy Tax Credit can bring the overall cost down, over time. South Dakota law also makes land used to generate electricity exempt from property tax.

The average South Dakota family uses 34,867 watts of energy on an average day. And, on average, they’ll get 5 hours of sweet South Dakota sun each day. So, to get enough energy to keep the power running all night, they’ll need their solar power array to generate 6,973 watts of energy per hour while the sun’s out.

To figure out exactly what you’d need based on where you live in South Dakota—and how much money you’d save—use this solar savings calculator:

South Dakota isn’t an ideal solar market. The state has excellent hydroelectric and wind resources that already supply three quarters of the state’s energy supply and are expanding. As a result, South Dakota ranks last in the country in solar development. South Dakota does not have net metering and other policies that might make small scale solar photovoltaics feasible.

South Dakota has a modest, non-binding renewable energy portfolio standard: 10% of the state’s electricity needs was intended to be filled renewables by 2015.

The state does not have net metering or much else in the way of pro-solar policies.

A 1 MW solar array is under construction near the Pierre airport; the project is the first solar asset in the state’s largest utility’s (Missouri River Energy Sources) portfolio.

In May 2017, solar energy company GenPro partnered with Thunder Valley to install solar panels in the new community located on the Pine Ridge Indian Reservation.

In January 2017, Black Hills State University announced plans for a solar panel installation on campus. The planned location of the solar panels are the Young Center, the Life Sciences Lab, Woodburn Hall, and the Library.

South Dakota does not have a solar lobby in the state, but the Solar Energy Industry Association lobbies for pro-solar policy nationwide. South Dakota is home to a substantial wind power lobby.