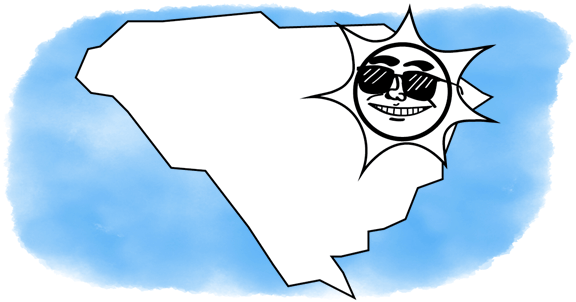 Going solar? Good call. It’s the right choice for your pocketbook and for the climate. If everyone in South Carolina used solar power, it would take 74 billion pounds of carbon out of the atmosphere every year—according to the EPA’s greenhouse gas calculator, that’s the equivalent of planting a forest that would cover all of the state.

Solar power isn’t yet a big part of the energy mix in South Carolina. Nationally, the state ranks #42 in solar energy use.

The biggest advantage of solar energy? The cost—$0. For the average South Carolina household, generating all their own electricity with solar would save $1,773/year. Also, you’re doing a favor for the next generation. Instead of relying on CO2-spewing coal plants and dangerous nuclear plants, which produce most of South Carolina’s electricity, you’ll be producing your own clean, renewable energy. In South Carolina, residential customers like you account for 23.1% of the state’s total energy consumption.

The disadvantages: The cost of installation. The average solar installation costs around $20,000. Incentives like South Carolina’s Solar Tax Credit, which allows taxpayers to claim a deduction of 25% of the cost of a solar heating or solar energy system, and the U.S. Residential Renewable Energy Tax Credit can bring the overall cost down.

To figure out exactly what you’d need based on where you live in South Carolina—and how much money you’d save—use this solar saving calculator:

South Carolina lags behind its neighbor North Carolina in solar development, but could catch up with its northerly cousin by continuing to improve its solar and renewables policy.

South Carolina has a modest renewable energy portfolio standard: the state’s goal is to have utilities voluntarily generate 2% of their electricity through renewable resources.

The state offers a tax credit to residential and business installers of solar systems.

Furman University in Greenville is building a 743 kW photovoltaic project that will reduce the school’s fossil fuel emissions by 3%.

The South Carolina Electric & Gas utility is building a 10 MW plant in Ridgeland.

In June 2017, Columbia Metropolitan Airport announced the completion of a 5-acre solar panel array. The 1.38 MW solar project is expected to produce bill credits worth $250,000.

By the end of 2019, Adgen Solar plans to have a 74 MW solar project complete for Aiken County. The solar facility is expected to produce enough solar energy for 15,000 homes.

In June 2017, Southern Current announced that their next solar project will be in Hampton County. The facility is expected to cost the solar company $2.5 million.

Solarize South Carolina is an advocacy group that is leading a campaign to massively expand the state’s solar capacity.