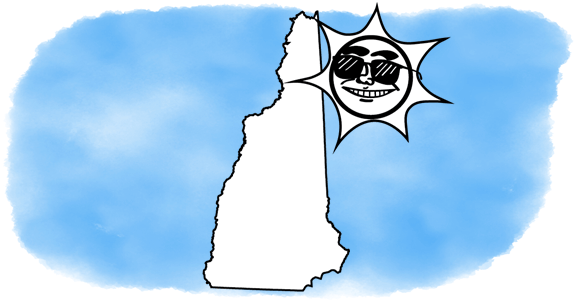 Going solar? Good call. It’s the right choice for your pocketbook and for the climate. If everyone in New Hampshire used solar power, it would take 10 billion pounds of carbon out of the atmosphere every year—according to the EPA’s greenhouse gas calculator, that’s the equivalent of planting a forest that would cover nearly two-thirds of the state.

Solar power is a growing part of the energy mix in New Hampshire. Nationally, the state ranks #19 in solar energy use.

The biggest advantage of solar energy? The cost—$0. For the average New Hampshire household, generating all their own electricity with solar would save $1,303/year. Also, you’re doing a favor for the next generation. Instead of relying on dangerous nuclear plants, which produce most of New Hampshire’s electricity, you’ll be producing your own clean, renewable energy. In New Hampshire, residential customers like you account for 31.3% of the state’s total energy consumption.

The disadvantages: The cost of installation. The average solar installation costs around $20,000. Incentives like New Hampshire’s residential renewable energy rebate program and the U.S. Residential Renewable Energy Tax Credit can bring the overall cost down. Also, more than 100 New Hampshire municipalities have made solar equipment exempt from local property tax.

The average New Hampshire family uses 20,633 watts of energy on an average day. And, on average, they’ll get 4.25 hours of sweet New Hampshire sun each day. So, to get enough energy to keep the power running all night, they’ll need their solar power array to generate 4,855 watts of energy per hour while the sun’s out.

To figure out exactly what you’d need based on where you live in New Hampshire—and how much money you’d save—use this solar savings calculator:

New Hampshire is pursuing an ambitious solar agenda. It has great promise as a solar state, and has the policy to carry it out.

New Hampshire has an ambitious renewable energy portfolio standard: roughly 25% of its energy is required to be generated by renewables by 2025.

New Hampshire, like most states, mandates that its utilities practice net metering. Net metering lets homeowners get credit for solar energy they generate but which goes back to the grid for others to use, and deducts the cost of the solar power they do use from their total bill. Unlike other states with burgeoning solar industries, (like neighboring Massachusetts), which have scaled back net metering as more and more solar capacity has come online, New Hampshire has actually acted in 2016 to expand its net metering program.

In April 2016, Throwback Brewery in North Hampton announced plans to draw approximately 50% of its energy from solar photovoltaics. Governor Maggie Hassan signed the bill creating an expansion of net metering at Throwback in August.

The Monadnock Food Co-op, in Keene, installed a 43.5 kW photovoltaic system in August 2016.

By the end of 2017, a 2 MW solar project is scheduled to open in Moultonborough. The solar array will be able to produce energy for 600 homes.

In April 2017, Tolemac Solar announced the operation of a 163.8 kW solar energy facility. The energy generated by the solar panels will be able to power 20 homes.

In May 2017, N.H. Solar Garden of Portsmouth was authorized to build a solar project with the Blackwater Road Superfund. Construction will most likely start in 2018.

The Monadnock Sustainability Network, Environment New Hampshire, and Solar for NH all advocated strongly for the expansion of the net metering program.