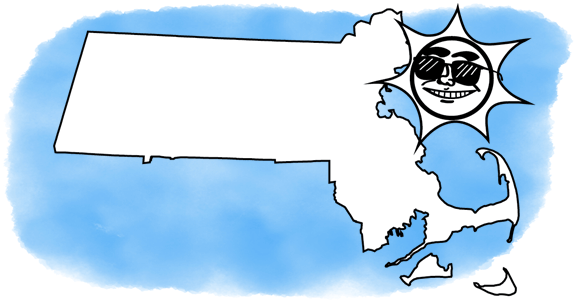 Going solar? Good call. It’s the right choice for your pocketbook and for the climate. If everyone in Massachusetts used solar power, it would take 33 billion pounds of carbon out of the atmosphere every year—according to the EPA’s greenhouse gas calculator, that’s the equivalent of planting a forest that would cover an area more than twice the size of the state.

Solar power is a growing part of the energy mix in Massachusetts. Nationally, the state ranks #7 in solar energy use.

The biggest advantage of solar energy? The cost—$0. For the average Massachusetts household, generating all their own electricity with solar would save $1,283/year. Also, you’re doing a favor for the next generation. Instead of relying on natural gas plants, supplied by fracking and offshore drilling, which produce most of Massachusetts’s electricity, you’ll be producing your own clean, renewable energy. In Massachusetts, residential customers like you account for 31.2% of the state’s total energy consumption.

The disadvantages: The cost of installation. The average solar installation costs around $20,000. Incentives like the U.S. Residential Renewable Energy Tax Credit can bring the overall cost down. Programs like Mass Solar Loan, which offers homeowners low-interest loans of up to $60,000 to cover the cost of solar installation, can help too.

The average Massachusetts family uses 20,500 watts of energy on an average day. And, on average, they’ll get 4 hours of sweet Massachusetts sun each day. So, to get enough energy to keep the power running all night, they’ll need their solar power array to generate 5,125 watts of energy per hour while the sun’s out.

To figure out exactly what you’d need based on where you live in Massachusetts—and how much money you’d save—use this solar savings calculator:

Massachusetts is a leading solar and renewables state. The state’s high demand for energy and high energy costs make solar at all scales a very appealing energy source. State policy reflects this situation, despite increasing challenges from utilities.

Massachusetts has an ambitious renewable portfolio standard: 15% of retail electricity sales are required to be from renewables by 2020.

Massachusetts requires that all investor owned utilities in the state offer net metering. Net metering deducts the solar energy home and building owners from their total utility bill, and credits them for any excess power generation going back to the grid. Net metering rates have recently been lowered, which has cast the future of solar into uncertainty.

The Massachusetts Renewable Energy Trust Fund, which is funded by revenue collected from utility customers, seeds renewable energy projects throughout the state, including the Massachusetts Clean Energy Center (MassCEC).

However, Massachusetts solar installation has slowed down because certain incentives need to be expanded.

MIT scientists recently unveiled a “sponge” that can boil water using solar energy, without connecting to any sort of energy grid.

In June 2017, Lanesborough announced plans to build a 6.6 MW solar project. The array would be placed along Partridge Road.

In 2017, multiple schools received solar power in Massachusetts from the company SunPower. One of these installments was at Stonehill College, where 20% of their energy needs are being met by a 2.8 MW system.

MassSolar advocates for pro-rooftop solar policies like net metering, along with other pro-solar programs.

The Massachusetts Clean Energy Center (MassCEC) advises the state government on solar policy as part of its semi-official functions.