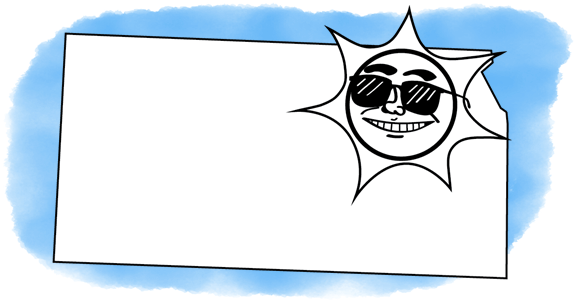 Going solar? Good call. It’s the right choice for your pocketbook and for the climate. If everyone in Kansas used solar power, it would take 71 billion pounds of carbon out of the atmosphere every year—according to the EPA’s greenhouse gas calculator, that’s the equivalent of planting a forest that would cover more than half of the state.

Solar power isn’t yet a big part of the energy mix in Kansas. Nationally, the state ranks #41 in solar energy use.

The biggest advantage of solar energy? The cost—$0. For the average Kansas household, generating all their own electricity with solar would save $1,355/year. Also, you’re doing a favor for the next generation. Instead of relying on CO2-spewing coal plants, which produce most of Kansas’s electricity, you’ll be producing your own clean, renewable energy. In Kansas, residential customers like you account for 21.2% of the state’s total energy consumption.

The disadvantages: The cost of installation. The average solar installation costs around $20,000. Incentives like the U.S. Residential Renewable Energy Tax Credit can bring the overall cost down. Unlike many other states, Kansas doesn’t offer any rebates or incentives for going solar.

The average Kansas family uses 30,933 watts of energy on an average day. And, on average, they’ll get 5.5 hours of sweet Kansas sun each day. So, to get enough energy to keep the power running all night, they’ll need their solar power array to generate 5,624 watts of energy per hour while the sun’s out.

To figure out exactly what you’d need based on where you live in Kansas—and how much money you’d save—use this solar savings calculator:

Kansas has little solar capacity; the state is a major fossil fuel extractor and its renewable industry has so far been focused on wind. The state is a strong candidate for renewables, with many sunny days and ample wind. However, the state has not provided the policy and economic incentives for solar to be economically viable in the same way as wind. Efforts to develop the renewable energy industry have been rolled back by Kansas’s state government.

Kansas used to have a renewable energy portfolio standard, but the law was amended to be voluntary in 2015.

Kansas, like most states, mandates net metering from its utilities. Kansans also have the option of negotiating their own metering arrangements with their utilities.

Kansas has typical interconnection guidelines. However, solar easements are not a property right in Kansas, and must be negotiated against covenants and other restrictions.

The state provides for a 10-year property tax exemption for renewable energy projects—the exemption had formerly been unlimited in duration.

In mid-2017, some students from the University of Kansas announced they’re building an sustainably-designed house. The passive solar house has 16 solar panels that create 4.8 kWh of solar energy.

In February 2017, Western Farmers Electric Cooperative announced that the solar farm in Cyril was almost complete. The 5 MW solar array has been built for studying the benefits of solar power.

The Kansas Sierra Club opposed efforts to weaken the renewable portfolio standard and has partnered with solar installers to spread the technology in the state.