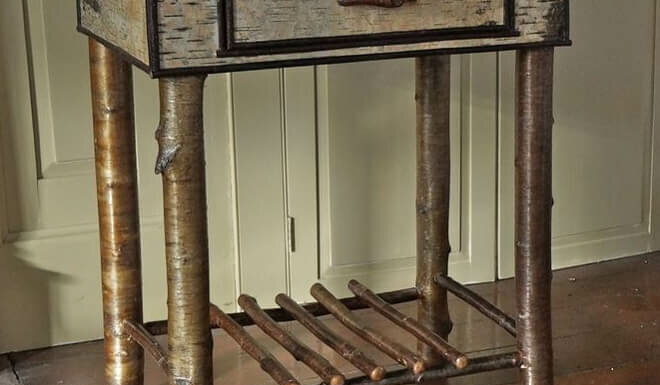 You are here: Home / Gardening / Bark Furniture And Accessories

Birch-Bark is waterproof and will not rot, its familiar surface is richly graphic.
Birch-Bark has been used for millennia in the making of canoes, wigwams, scrolls, Buddhist manuscripts, maps (including the oldest maps of North America), art, torches, fans, musical instruments, shoes, clothing, as a substratum for sod, birch-bark roofs and more…

Werner Neumann’s Birchwood collection is born from his love of natural materials and lightness of form. Covered in natural birch bark yet with clean lines. wernerneumann.nl

Birch Bark Sauna.
Birch bark is a good thermal insulator.
The light walls of the sauna are supported by a wooden structure that is hidden inside two layers of braided birch bark structure. By Finnish architects Teija Losoi, Anne Varsamäki and Ilari Pirttilahti. tuohisauna.wordpress.com

Birch Bark Lamp.
How to: ruffledblog.com

Bark Marquetry.
By Evgeniy Aleksandrov.
“The most important thing is to find original colors of birchbark. The bark of dead trees is used basically. In lowlands, bogs, at streams is one color of a bark, in mountainous, hilly district is the other color. The bark of a birch after big fires is used for contrast.” onlythat.com

Birch Bark Canoe.
‘the indigenous peoples of Canada and the US made canoes of paper birch, which was harvested in early spring by stripping off the outer layer of bark in one piece. Next, the two ends (stem and stern) were sewn together and made watertight with the pitch of balsam fir. The ribs of the canoe were made of white cedar, and the hull, ribs, and thwarts were fastened using watap, a binding usually made from the roots of various species of conifers and then caulked with pitch.’ wiigwaasijiimaan.wordpress.com

Birch Bark Abstracts
‘I go to the forest and look for pieces of Birch Bark with fascinating patterns, texture, different colors on a dead tree. Sometimes I use moss, fungi, nodes etc. that naturally grow on a bark. The interesting bark can be on the outside or the inside. Although it is very important part of the work, it is still just the beginning. The next stage is to clean the bark, to flatten the pieces, to dry them and spray on several protective layers of fixative.’ By birchbarkpoetry.ca

Birch-bark letter no. 202 contains spelling lessons and drawings made by a boy named Onfim who lived at the end of the twelfth century or beginning of the thirteenth century in the city of Novgorod, Russia. Based on draftsmanship, experts estimate his age as between 6 and 7 at the time. goldschp.net, wikipedia.org.

Birch bark shoes
have been keeping feet protected for centuries, if not millennia.
nordic-aputsiaq.blogspot.com

How to harvest birch bark:
instructables.com

How to make a birch bark frame:
marthastewart.com

How to birchbark Lamps:
ruffledblog.com

How to birchbark container:
jonsbushcraft.com