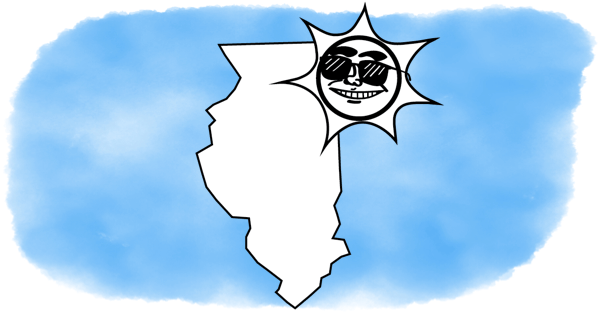 Going solar? Good call. It’s the right choice for your pocketbook and for the climate. If everyone in Illinois used solar power, it would take 197 billion pounds of carbon out of the atmosphere every year—according to the EPA’s greenhouse gas calculator, that’s the equivalent of planting a forest that would cover an area more than twice the size of the state.

Solar power is a growing part of the energy mix in Illinois. Nationally, the state ranks #21 in solar energy use.

The biggest advantage of solar energy? The cost—$0. For the average Illinois household, generating all their own electricity with solar would save $1,065/year. Also, you’re doing a favor for the next generation. Instead of relying on nuclear and coal plants, which produce most of Illinois’s electricity, you’ll be producing your own clean, renewable energy. In Illinois, residential customers like you account for 25.5% of the state’s total energy consumption.

The disadvantages: The cost of installation. The average solar installation costs around $20,000. Incentives like the U.S. Residential Renewable Energy Tax Credit can bring the overall cost down. Hopefully Illinois will renew its rebate incentive program, which was shut down for 2016.

The average Illinois family uses 24,833 watts of energy on an average day. And, on average, they’ll get 4.25 hours of sweet Illinois sun each day. So, to get enough energy to keep the power running all night, they’ll need their solar power array to generate 5,843 watts of energy per hour while the sun’s out.

To figure out exactly what you’d need based on where you live in Illinois—and how much money you’d save—use this solar savings calculator:

Illinois is middle of the pack in solar generating capacity, but the state is working aggressively to change that. Solar capacity grew by 75% in 2015.

The state began giving out rebates for small-scale solar and wind projects in 1997. Residential applicants could receive up to $10,000 in rebates from the program. The program wasn’t renewed in 2016, check here for updates. The state also operates a Green Energy Loans Program, which allows businesses, NGOs, and local governments to apply for state-backed loans for solar projects at low interest rates.

In 2008, Illinois became one of the many states that has enacted a net metering policy. Systems up to 2 MW are eligible for the program. Net metering allows residential and commercial property owners to be fairly compensated for the solar electricity they generate. The power used is credited to their utility bill, and they get credits for energy they send back to the grid.

Scientists at the University of Illinois at Chicago have developed a “leaf” technology that could use solar power to convert atmospheric carbon dioxide into energy through a photosynthetic process.

The USDA and the Illinois Solar Energy Association both provided grants to solar projects in Southern Illinois; the USDA grant will provide infrastructure upgrades and the ISEA grant will train electricians in solar installation.

Blue Sky Vineyard, a winery in Southern Illinois, installed solar panels that will cover around 25% of its energy needs.

In June 2017, the first “green” residence option for University of Illinois was announced. The University installed 68 solar panels onto Presby Hall. The project is expected to offset 19.5 tons of carbon emissions annually.

In May 2017, Elgin announced the construction of a 3,700 solar panel project. The solar facility will produce 1.2 MW of solar energy for the company Rainy Investments.