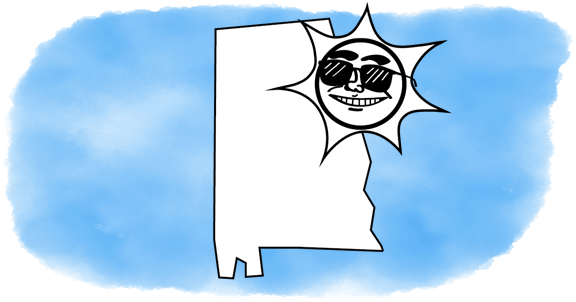 Going solar? Good call. It’s the right choice for your pocketbook and for the climate. If everyone in Alabama used solar power, it would take 153 billion pounds of carbon out of the atmosphere every year—according to the EPA’s greenhouse gas calculator, that’s the equivalent of planting a forest that would cover an area nearly twice the size of the state.

Solar power is not yet a big part of the energy mix in Alabama. Nationally, the state ranks #44 in solar energy use.

The biggest advantage of solar energy? The cost—$0. For the average Alabama household, generating all their own electricity with solar would save $1,743/year. Also, you’re doing a favor for the next generation. Instead of relying on coal, natural gas, and nuclear plants, which produce most of Alabama’s electricity, you’ll be producing your own clean, renewable energy. In Alabama, residential customers like you account for 19.3% of the state’s total energy consumption.

The disadvantages: The cost of installation. The average solar installation costs around $20,000. Incentives like the U.S. Residential Renewable Energy Tax Credit can bring the overall cost down. Also, Alabama residents served by the Tennessee Valley Authority can get reimbursed for solar power they generate.

The average Alabama family uses 42,167 watts of energy on an average day. And, on average, they’ll get 3 hours of sweet Alabama sun each day. So, to get enough energy to keep the power running all night, they’ll need their solar power array to generate 14,056 watts of energy per hour while the sun’s out.

To figure out exactly what you’d need based on where you live in Alabama—and how much money you’d save—use this solar savings calculator:

Alabama has meager solar power generation incentives and doesn’t mandate that folks who contribute solar energy to the grid get compensated for it. However, the state’s largest public utility, the Tennessee Valley Authority, offers substantial incentives for solar generation and installation.

Unlike nearly every other U.S. state, Alabama does not have a statewide net metering policy. In most states, utilities are required to fairly compensate homeowners who generate solar energy, by crediting them for the solar energy they use, and paying them for energy they send to the grid. Not in Alabama.

The state has a $70 million, low interest (1% annually) loan program available for large-scale renewable energy projects, including solar. The program was seeded with funds from the 2009 federal stimulus package, not state funds. The program was barely approved in 2015 by the Alabama Public Service Commission, which regulates energy projects in the state.

The Tennessee Valley Authority (TVA), a regional Federal agency that is one of the largest utilities in Alabama, offers price breaks for medium-scale customers who generate a portion of their power through renewables including solar. The TVA offers a similar program for homeowners.

Walmart will spend $140 million on a solar project that will be completed in Alabama this year, the facilities 72 MW of solar energy will be monitored by Alabama Power.

In February 2017, 1,000 acres in Lafayette was deeded for a solar project that will supply 2,500 homes with power, locals started to see construction for the project in March.

In March 2017, Birmingham’s Altamont School turned on a 14.7 KW solar system. The system will not only teach students about solar energy, but fulfill 20% of the school’s daytime electricity needs.

The Alabama Environmental Council and the Alabama Sierra Club chapter are collaborating on an effort to catalog successful solar projects throughout the state.