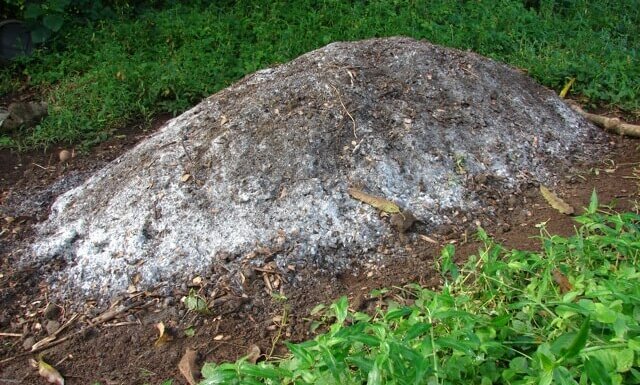 It can be difficult to have a symbiotic relationship with microorganisms when you live in a world where Purell hand sanitizer dispensers line the wall of every doctor’s office and the words “bacteria” or “fungus” cause fear. It wasn’t until I took a soil science class at the Evergreen State College, where I was exposed to a story about fungus, that my perspective changed.

The story was about the first land pioneering algae, which would not have survived without a symbiotic relationship to an aquatic fungus named Chytrids. The Chytrid found nutrients from the terrestrial environment that were supplying nutrition for the algae. In exchange, the algae created sugar from the sun using photosynthesis.  This new symbiotic organism, now called Lichen, pioneered the way for all plant life on land.

This idea that fungi can live symbiotically with any organism, let alone set the foundation for life on land, shifted a paradigm in my mind. A deep gratitude and curious excitement for microbes bubbled inside me. Eventually, this excitement led to my discovery of integrating beneficial micro-organisms into farms or gardens through Korean Natural Farming, and more specifically the cultivation of Indigenous Microorganisms.

Korean Natural Farming is a type of farming founded by Cho Han-Kyu in the 1960’s that focuses on the natural biological systems in soil. Natural Farming utilizes self-made microorganisms and nutrient solutions to maintain healthy microbes, enabling the growth of healthy plants.

One of the key components of Korean Natural Farming is the collection and replication of Indigenous Microorganisms, or IMO. IMO are the microorganisms that have been adapting and surviving within the native soil environments throughout the years. The organisms that primarily make up IMO are beneficial fungi, bacteria, and yeasts.

People who practice Natural Farming cultivate a variety of the most robust IMO from local, undisturbed ecosystems that are biologically active. The required soil conditions are met through the IMO process Cho Han-kyu created. Along with the IMO technology, Korean Natural Farming empowers the farmer with recipes for self-made plant, animal, and mineral based solutions. These solutions are used to feed and maintain high populations of beneficial microbes.

It is important to collect IMO from not only the closest and most similar area to that of your land, but from an area that is also very biologically active. The best place to start is any undisturbed leaf litter that could activate the growth of bacteria and other microorganisms.

After a site is found, a box made from plant material or wood is filled with rice and placed in the location. It is important to make your box visible so you can see the growth of white strands called mycelium. The box then gives the microbes a home as they feed on the rice. This collection phase is finished once vibrant white mycelium completely covers the rice and weaves through all the grains to make a single mass.

A Closer Look At Beneficial Microorganisms

It can be difficult to tell if the collected IMO are beneficial, but there are some signs to initially look for.  The indications of good IMO are a lack of bad odors, a predominantly white mass (not red or black), and mycelium that can hold all the grains of rice into one mass. Although, keep in mind that you will never know for sure until you look through a microscope.

A microscope is an essential tool for anyone using a microbial inoculant (homemade or bought). It is important to be 100% positive you have collected the right fungi to be successful.

When we put the IMO under a 400x microscope, we can see the fungi collected.

Beneficial fungi strains will appear brown in color, due to the presence of plant-loving humic and fulvic acids within them. In contrast, the pathogenic strains will be clear in color. The beneficial microbes are thicker than 3.5 micrometers, and their body segments are straight. Seeing a high presence of these organisms in our IMO is an easy way to know that the correct type has been collected.

The microorganisms are then put into a dormant state by adding dry brown sugar, which is equal to the weight of the microbes gathered. The brown sugar pulls all of the water out of the microbe bodies by absorbing the water molecules. The microbes sporulate and become dormant through the loss of water. This drying process is called IMO 2 and causes the spores to be shelf stable for at least two years.

Before moving on to the next step, a way to guarantee a wide range of microbe diversity is by collecting IMO from different environments. Good places to collect IMO are the undisturbed decaying plant matter of forests under broad-leafed trees, bamboo patches, grasslands/prairies, perennial shrubs, and other areas with beneficial fungi. A leaf littered environment with a sweet smell is usually a good spot to collect IMO.

The next three stages of the process involve specific composting methods to further build up the IMO. The IMO is introduced to a carbohydrate source, a carbon source, and other natural farming solutions. These other solutions provide foods, medicines, and other microbes to regulate the process with specific nutrients. The controlled environment enables the farmer to increase the desired IMO populations without increasing undesired microorganisms.

The farmer then combines the soil from their garden to the pile of microorganisms to adapt and train the IMO for specific conditions. Drake Weinert and Chris Trump go into further detail about the methods and proper approach to Natural Farming in the videos below.

When we have established a range of IMO into the soil by feeding them Natural Farming solutions, the bodies of the microbes will become our fertilizer. The solutions give the plants the ability to control and select the particular microbes they need for their root system. This selection is done through the plant’s release of exudates from the roots that feed and attract specific microbes.

Once the plant has attracted the specific fungi or bacteria they desire, larger microorganisms, like protozoa and nematodes, naturally come to graze on the bacteria/fungi. These larger organisms consequently excrete the bacteria/fungi in a water soluble form at the plant’s roots, where the plant will absorb the nutrient-rich waste.

Additionally, other types of fungi will connect their wide stretching nets of mycelium directly to the plant roots, as if they were one organism. In this way, the plant is in control and can communicate to microorganisms directly to attain the proper amount of nutrients. This system is better than relying on human guesses and chemical fertilizers to do all the work.

The established IMO will then increase the plant’s resistance, even providing a cure in come cases, to fungal and bacterial diseases. Beneficial fungi found in IMO will regulate pathogenic organisms in your soil through their hyphae, and release anti-bacterial/fungal substances to keep pathogenic organisms in check. Natural Farmers like Chris Trump, a large-scale macadamia nut farmer, used IMO and other Natural Farming inputs to save hundreds of acres of severely diseased trees. His success story is one of many resulting from natural farming and IMO.

Along with disease prevention and increased fertility, IMO provides correct aeration, water retention, and the growth of fewer weeds. These benefits all come with the re-introduction of beneficial aerobic fungi grown in IMO into our soil.

Other Uses On The Farm

The same concepts of disease prevention with IMO is applied to controlling the smell of animal pens. When a pen has been inoculated with IMO, the microorganisms will find a home in the excrement before pathogenic organisms can. The reduction of pathogenic organisms that cause bad odors will decrease or eliminate the smell. If the IMO was made correctly, a handful of bedding where pigs have been excreting waste will smell like a rich forest floor and prevent flies.

The hydrocarbons that make up fossil fuels are mostly made of carbon molecules that hold small amounts of heavy metals. These heavy metals are lead, mercury, nickel, tin, cadmium, antimony, and arsenic.

When these elements are burned and released into the atmosphere at exponential rates, they coat the surface of the entire planet, and in higher numbers each day. The burning of fossil fuels, along with the use of pesticides, herbicides, and fungicides, creates the perfect environment for pathogenic organisms to take over. Once toxins kill beneficial organisms, pathogenic organisms are able to feed on the beneficial organisms’ food source. When the pathogen population has grown large enough, they will feed on healthy trees, plants, and animals.

The rapid death of forests around the world from fungal diseases is an example of accumulating pathogenic organisms. Often, the weakened immune system of the trees is caused by human pollution and climate change.

Unfortunately, a majority of people use more pesticides, herbicides, and fungicides to target the disease infested forest itself. Societal practices of using these chemicals are proving to be futile, but Korean Natural Farming could be the solution. In Natural Farming, the growers partner with the microbial world through maintaining healthy biology. This system can clean up poisons, re-fertilize soil, and ensure a safe environment for future generations.

The introduction of IMO to a farm or garden can have huge uses in the bioremediation of polluted land. Fungi have some of the most powerful enzymes known on earth and are experts in breaking down organic and inorganic material. Potentially, the introduction of beneficial native fungi selected with powerful enzymes could result in breaking down chemicals that are poisonous and scarring the earth. In fact, modern science is having a hard time comprehending fungi’s ability to break down toxic compounds because humans can’t create a controlled environment to watch them.

Fungi and other beneficial microbes were able to make land on earth habitable for creatures like us in the past and will continue to do so as long as we allow them to play their vital role in our ecosystem.

Today’s Homestead Story about Indigenous Microorganisms (IMO) was written by Adam McWilliams. Adam lives on a farm in Eastern Washington where he is co-farming three acres of organic vegetables and melons as well as working to make self-made fertilizers and microbial inoculants. In this post, Adam will share knowledge about Indigenous Microorganisms, a self-made microbial inoculant that utilizes species of beneficial fungi local to your bio-region.

Today’s Homestead Story about biochar was written by Adam McWilliams. Adam lives on a farm in Eastern Washington where he is co-farming three acres of organic vegetables and melons as well as working to make self-made fertilizers and microbial inoculants.