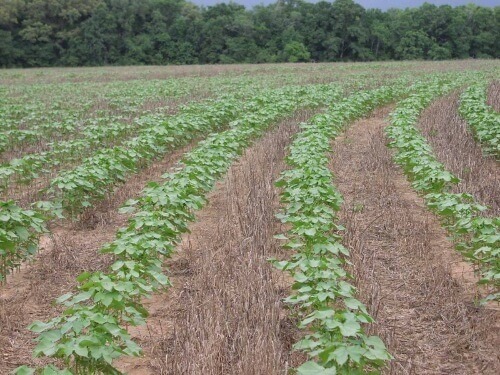 Yesterday I posted about what I believe to be the five best things about Organic farming.  These are attributes that I seriously believe are good ideas for how we should farm, and ideas that make sense to increasingly bring into mainstream agriculture (more cover cropping, more diverse rotations, more focus on building the quality of soils…).   But I don’t believe that Organic or even Conventional farming influenced by the best of Organic will be all we actually need.

Somehow, by mid century we need to increase the amount of food that we produce by 50-100%.  We really need to do that without adding much new farmed land.  We need to do that in a way that actually has less environmental impact than what we do today.

I actually think that is possible. I’ve posted a description of what solutions are well supported by science and which also have been demonstrated at substantial commercial scale.  In this post I’ll describe why a farmer working within the USDA Organic rules would not be able to be part of that optimum solution.  I’m not saying this to argue that Organic should be changed.  I don’t think that is possible given the politics.  I’m saying this to explain why the answer for the 99.5% of non-Organic agriculture needs to be something different.

These 5 key limits of Organic are:

Organic growers use pesticides, but from a list based on whether they are natural.  This includes  some very effective chemicals made by the fermentation of microbes such as Dow AgroScience’s Spinosad.  It includes live biologicals like AgraQuest’s Serenade®, and plant extracts like Marrone Bio-Innovations’ Regalia.  These are all very safe products which do control pests. The approved Organic list also includes various forms of copper (copper sulfate, copper hydroxide…) as fungicides.  These products are quite a bit more toxic and environmentally damaging than many non-organic fungicides options (and also less effective).  There are many  very safe and effective pesticide options available to conventional growers.  If the Organic rules were modified to allow the use of “Reduced Risk” and/or “Category IV” synthetic options, Organic yields could be much higher as they would need to be to be part of the big “solution.”

One category of pesticide that is almost completely lacking for Organic is a herbicide.  This means that for many crops grown as Organic, the only way to control weeds is mechanically (plowing, harrowing, hoeing…) or by “flame weeding” with LPG.  It turns out that the best way to build soil health (my #1 good thing about Organic) is to never disturb it.  This is accomplished through a practice called “No-till,” or variations on that method.   That combined with cover cropping and “controlled wheel traffic” is a way to  build soil quality as well as Organic methods, but without the need to import large quantities of Organic matter to the field.  This is a truly scalable way to get all the benefits of soil health.  The Rodale Institute recognizes this and has tried to develop an Organic no-till system, but this is only practical on a small scale.

Even though Organic farmers supply a significant part of their nitrogen via legume crops, it is still necessary to apply more nitrogen for many other crops.  This principly comes from animal sources (manure, composted manure or other materials, fish meal, blood meal, bone meal…) .  Ironically, the manure/compost frequently comes from a CAFO or large dairy because that is where one can collected enough manure.  There is only enough collectable manure to fertilize 5% of US crops.  The other Organic sources are more expensive and also limited. Our sustainable crop future cannot be dependent on these animal sources.

4. Inability to Fully Use Precision Fertilization

Fertilizers are far and away the biggest environmental issue for agriculture.  It is very difficult to supply a plant with nutrients only during the times when it is withdrawing it from the soil for growth.  When some nutrients (mainly nitrogen and phosphorus) are present in the soil before or after those periods of demand, they can move into ground or surface waters and/or they can be converted into the potent greenhouse gas, nitrous oxide.  The no-till+cover crop scenario above does a great deal to minimize these issues, but there is still room for improvement.

For an irrigated crop it is actually possible to “spoon feed” fertilizers at very close to the exact crop need by delivering through the irrigation water as a soluble fertilizer.  To do this with Organic approved sources of soluable fertilizer is extremely expensive, and there have been two recent major incidents of fraud where the marketer of an Organic option was actually spiking it with “synthetic nitrogen” to reduce cost.  For non-irrigated crops there are ways to place the fertilizer exactly where it is needed and to apply different amounts to different parts of the field to better match need and supply.  This is not practical to do with something like a manure or compost that are applied at multiple tons/acre.  Once again, the Organic rules limit a farmer’s ability to optimize both yield and environmental impact.

5.  Inability to Use Genetically Modified Crops

There are a great many crops that will never be GMO because they are too small to justify the research and regulatory investment.  This includes most fruits and vegetables, and so this point is only an issue for the major row crops.  The Organic community rejected the use of biotech traits long before there were any commercial GMO crops.  The rejection was based on purely philosophical grounds, not on any scientific evidence genera
ted before or after.  UC Davis geneticist Pam Ronald and her husband Raul Adamchack  who is an Organic specialist, have argued that Biotech traits should be part of a future sustainable standard that goes beyond Organic because of their demonstrated environmental benefits (see Tomorrow’s Table.  I had previously misrepresented their position as inclusion of GMO in Organic, my apologies).  I agree with what they are saying, but I can’t imagine Organic advocacy groups ever agreeing to such a change.  Genetically engineered crops can only deal with certain of the challenges that face agriculture today and in the future, but their complete exclusion from Organic limits what that system could ever achieve.

I’m not a defender of the status quo in Agriculture, nor do I believe that it is a static system anyway.  My hope is that the future of agriculture will entail a major shift to the sort of optimal practices that I have described at Applied Mythology.  I’m sure Organic will continue as a niche, but because of its philosophical constraints, it will not be a significant part of the solution.

You are invited to comment here or to email me at feedback.sdsavage@gmail.com.

Organics for the bed and bath: check out our current selections of organic bedding, towels, cosmetics, and feminine care products.