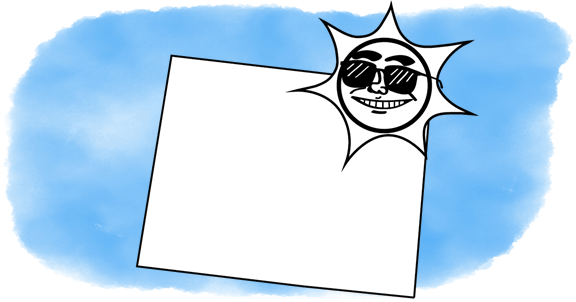 Going solar? Good call. It’s the right choice for your pocketbook and for the climate. If everyone in Wyoming used solar power, it would take 104 billion pounds of carbon out of the atmosphere every year—according to the EPA’s greenhouse gas calculator, that’s the equivalent of planting a forest that would cover nearly two-thirds of the state.

Solar power isn’t a big part of the energy mix in Wyoming. Nationally, the state ranks #50 in solar energy use.

The biggest advantage of solar energy? The cost—$0. For the average Wyoming household, generating all their own electricity with solar would save $1,087/year. Also, you’re doing a favor for the next generation. Instead of relying on CO2-spewing coal plants, which produce most of Wyoming’s electricity, you’ll be producing your own clean, renewable energy. In Wyoming, residential customers like you account for 8.9% of the state’s total energy consumption.

The disadvantages: The cost of installation. The average solar installation costs around $20,000. Incentives like the U.S. Residential Renewable Energy Tax Credit can bring the overall cost down, over time.

The average Wyoming family uses 28,767 watts of energy on an average day. And, on average, they’ll get 5.5 hours of sweet Wyoming sun each day. So, to get enough energy to keep the power running all night, they’ll need their solar power array to generate 5,230 watts of energy per hour while the sun’s out.

To figure out exactly what you’d need based on where you live in Wyoming—and how much money you’d save—use this solar savings calculator:

Wyoming ranks low in solar capacity and has little solar in the works; the hasn’t gotten serious about pursuing renewable energy production, in part because it produces so much fossil fuel.

Wyoming is one of the few states that does not have a renewable energy portfolio standard.

Wyoming does, however, have a substantive net metering program. Net metering deducts energy private solar/renewable operators have generated from the total cost of their utility bill and credits those small operators for any excess power generation that goes to the grid at large. However, without an accompanying renewable standard or state-assisted financing, Wyomingites have little reason to take advantage of it.

Wyoming has few solar projects in the works, but it might start buying some of California’s excess solar power.

At the beginning of 2017, planning began for one of the first commercial solar energy projects in Wyoming. The plan will generate 80 MW of solar energy when complete.

In May 2017, professors at University of Wyoming announced a solar project that increased solar energy efficiency by an average of 300%.

The Wyoming Chapter of the Sierra Club has arranged a special solar rate with solar installers for members and lobbies the state for renewable energy policy.