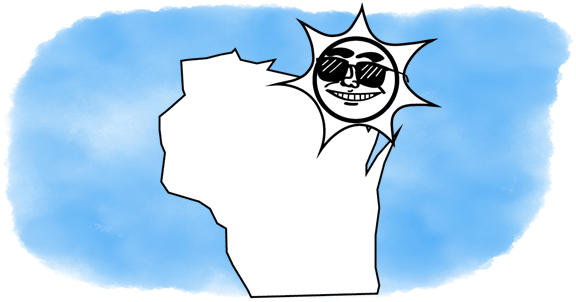 Going solar? Good call. It’s the right choice for your pocketbook and for the climate. If everyone in Wisconsin used solar power, it would take 86 billion pounds of carbon out of the atmosphere every year—according to the EPA’s greenhouse gas calculator, that’s the equivalent of planting a forest that would cover nearly all of the state.

Solar power is a growing part of the energy mix in Wisconsin. Nationally, the state ranks #29 in solar energy use.

The biggest advantage of solar energy? The cost—$0. For the average Wisconsin household, generating all their own electricity with solar would save $1,139/year. Also, you’re doing a favor for the next generation. Instead of relying on CO2-spewing coal plants, which produce most of Wisconsin’s electricity, you’ll be producing your own clean, renewable energy. In Wisconsin, residential customers like you account for 24.1% of the state’s total energy consumption.

The disadvantages: The cost of installation. The average solar installation costs around $20,000. Incentives like Wisconsin’s Biogas, Solar, and Wind Energy Equipment Exemption, the Milwaukee Shines low-interest loan program, and the U.S. Residential Renewable Energy Tax Credit can bring the overall cost down.

The average Wisconsin family uses 23,133 watts of energy on an average day. And, on average, they’ll get 4 hours of sweet Wisconsin sun each day. So, to get enough energy to keep the power running all night, they’ll need their solar power array to generate 5,783 watts of energy per hour while the sun’s out.

To figure out exactly what you’d need based on where you live in Wisconsin—and how much money you’d save—use this solar savings calculator:

Wisconsin is a mediocre solar state, but as a fossil fuel reliant net energy importer, could do more to spur investment in the industry; peer states like Missouri and Minnesota have jump-started the solar industry through smart policy.

Wisconsin has a modest renewable energy portfolio standard that it has let expire: the state was required to meet 10% renewable production by 2015, which it achieved in 2013.

Wisconsin, like most states, mandates that its utilities practice net metering. Net metering deducts energy private solar/renewable operators have generated from the total cost of their utility bill and credits those small operators for any excess power generation that goes to the grid at large.

The largest solar project in Wisconsin to date, a 2.2 MW photovoltaic system in Beloit, began operations in June 2016.

In June 2017, ground was broken on a new Milwaukee subdivision that is aiming to be a net-zero community by requiring every home to have solar panels.

In early 2017, Madison, Wisconsin pledged to receive 100% of its energy from renewable resources, including solar. Madison is joined by 23 other cities who have joined the Sierra Club’s “Ready for 100” campaign.

Plans were set in June of 2017 for Madison College in Wisconsin to build a 1,400-kilowatt Solar PV system, potentially saving the college $200,000 a year in costs.

RENEW Wisconsin is a renewables industry and grassroots advocacy group.
WiSEA is the Wisconsin branch of the Solar Energy Industry association, a solar industry trade group that lobbies for pro-solar and pro-renewable policies.