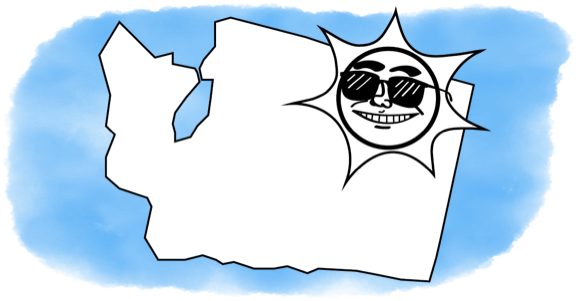 Going solar? Good call. It’s the right choice for your pocketbook and for the climate. If everyone in Washington used solar power, it would take 15 billion pounds of carbon out of the atmosphere every year—according to the EPA’s greenhouse gas calculator, that’s the equivalent of planting a forest that would cover 13% of the state.

Solar power is a growing part of the energy mix in Washington. Nationally, the state ranks #28 in solar energy use.

The biggest advantage of solar energy? The cost—$0. For the average Washington household, generating all their own electricity with solar would save $1,046/year. Also, you’re doing a favor for the next generation. Instead of relying on habitat-destroying hydroelectric power dams, which produce most of Washington’s electricity, you’ll be producing your own clean, renewable energy. In Washington, residential customers like you account for 23.9% of the state’s total energy consumption.

The average Washington family uses 33,500 watts of energy on an average day. But how much sun they’ll get to generate solar power with depends on where in the state they live. In Wenatchee you can count on 5.5 hours of sun per day, on average. But families in Seattle only see an average of 3.5 hours of sun per day. The Wenatchee family will only need to generate 6,090 watts/hour while the sun’s out, but the Seattle family will need to make 9,571 watts/hour. The Seattle family would need nearly twice the number of solar panels.

Exactly how many panels would each example family need? Assuming they go with 250-watt solar panels, the math is simple.

To figure out exactly what you’d need based on where you live in Washington—and how much money you’d save—use this solar saving calculator:

Washington’s energy is mostly hydroelectricity and wind generated by public utilities, has extremely cheap and prevalent renewables. Washington’s retail electricity rates are the lowest in the United States. However, good policies make the state a strong candidate for solar growth, and Washington already exceeds solar capacity in peer states like Oregon and Minnesota.

Washington has a modest renewable energy portfolio standard: 15% of the state’s energy must be drawn from renewable sources by 2020. This standard is made redundant, however, by the fact that roughly 75% of Washington’s electricity comes from hydroelectric and an additional 10% comes from wind power. Washington’s standard cannot, therefore, be regarded as a renewables growth mechanism.

However, Washington does mandate its utilities to provide net metering to their customers. Net metering deducts energy private solar/renewable operators have generated from the total cost of their utility bill and credits those small operators for any excess power generation that goes to the grid at large.

Washington offers generous incentives, including tax breaks, for the setup and interconnection of small scale solar.

In 2017, Toppenish High School announced they will install solar panels, the first step to a program in Yakima Valley teaching students about solar technology.

As of May 2017, Snohomish County Public Utility District and Spokane’s Avista split $7 million from Washington’s Green Energy Fund to strengthen their microgrid programs, Avista plans to use the grid for a “shared energy economy.”

By 2019, the Tri-City Development Council will finish a 20 MW solar project with French company Neoen, it will become the largest solar project in Washington.

Solar Washington is a general membership nonprofit that promotes solar at the state and local levels.

Solar Installers of Washington is a solar industry trade group that advocates for pro-solar policies.

Northwest SEED is a nonprofit that promotes community energy products, including community solar.