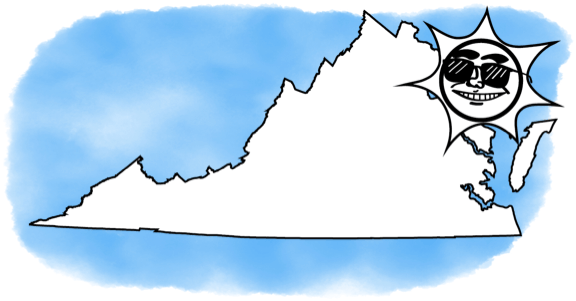 Going solar? Good call. It’s the right choice for your pocketbook and for the climate. If everyone in Virginia used solar power, it would take 58 billion pounds of carbon out of the atmosphere every year—according to the EPA’s greenhouse gas calculator, that’s the equivalent of planting a forest that would cover 85% of the state.

Solar power is a growing part of the energy mix in Virginia. Nationally, the state ranks #22 in solar energy use.

The biggest advantage of solar energy? The cost—$0. For the average Virginia household, generating all their own electricity with solar would save $1,560/year. Also, you’re doing a favor for the next generation. Instead of relying on natural gas plants, supplied by fracking and offshore drilling, and dangerous nuclear plants, which produce most of Virginia’s electricity, you’ll be producing your own clean, renewable energy. In Virginia, residential customers like you account for 26.4% of the state’s total energy consumption.

The disadvantages: The cost of installation. The average solar installation costs around $20,000. Incentives like the U.S. Residential Renewable Energy Tax Credit can bring the overall cost down.

The average Virginia family uses 39,067 watts of energy on an average day. And, on average, they’ll get 3.75 hours of sweet Virginia sun each day. So, to get enough energy to keep the power running all night, they’ll need their solar power array to generate 10,418 watts of energy per hour while the sun’s out.

To figure out exactly what you’d need based on where you live in Virginia—and how much money you’d save—use this solar savings calculator:

Virginia doesn’t rank highly in solar capacity now, but will make strides in the next five years to catch up to peer states like Pennsylvania and Illinois. However, the state could do much more to increase solar capacity by adopting pro-renewable policies.

Virginia does mandate net metering by its utilities. Net metering deducts energy private solar/renewable operators have generated from the total cost of their utility bill and credits those small operators for any excess power generation that goes to the grid at large. Net metering has proven to be the most effective way to grow the solar industry in any given state.

However, Virginia began to allow third party financing for solar projects, which should spur growth in the solar industry.

A utility-scale, 20 MW solar project will break ground in Cape Charles in 2016.

In June 2017, Kenmore Middle School in Arlington was selected to have a solar panel installed as a part of an initiative to teach students about clean energy.

Hexagon energy announced in June 2017 that they have plans to build a 100Mw 375,000 panel array to be spread across 900 acres in Gloucester County.

An Emory local has taken to the streets in a neon green hybrid bicycle that runs on solar power. The new mode of transportation has been sweeping the nation since its Kickstarter campaign back in 2012.

The Maryland-DC-Virginia (MDVSEIA) branch of the Solar Energy Industry Association (SEIA) advocates for solar businesses and pro-solar policy in all three areas.