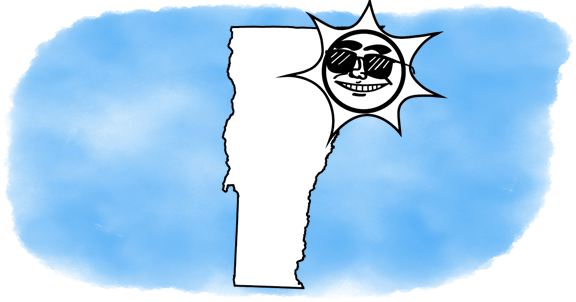 Going solar? Good call. It’s the right choice for your pocketbook and for the climate. If everyone in Vermont used solar power, it would take 27 million pounds of carbon out of the atmosphere every year—according to the EPA’s greenhouse gas calculator, that’s the equivalent of planting a forest that would cover 10,245 acres of the state.

Solar power is a growing part of the energy mix in Vermont. Nationally, the state ranks #13 in solar energy use.

The biggest advantage of solar energy? The cost—$0. For the average Vermont household, generating all their own electricity with solar would save $1,192/year. Also, you’re doing a favor for the next generation. Instead of relying on dangerous nuclear plants, which produce most of Vermont’s electricity, you’ll be producing your own clean, renewable energy. In Vermont, residential customers like you account for 31.7% of the state’s total energy consumption.

The disadvantages: The cost of installation. The average solar installation costs around $20,000. Incentives like Vermont’s renewable energy incentive program and the U.S. Residential Renewable Energy Tax Credit can bring the overall cost down.

The average Vermont family uses 18,967 watts of energy on an average day. And, on average, they’ll get 4.5 hours of sweet Vermont sun each day. So, to get enough energy to keep the power running all night, they’ll need their solar power array to generate 4,215 watts of energy per hour while the sun’s out.

To figure out exactly what you’d need based on where you live in Vermont—and how much money you’d save—use this solar savings calculator:

Vermont has an ambitious renewable energy program and has created an excellent policy market for solar energy.

Vermont has an extremely ambitious renewable energy portfolio standard: the state will require that 75% of its energy production come from renewables by 2032. Vermont’s standard is unique because, in addition to its production goals, it also mandates demand reduction from utilities.

Like most states, Vermont requires its utilities to offer their customers net metering. Net metering deducts energy private solar/renewable operators have generated from the total cost of their utility bill and credits those small operators for any excess power generation that goes to the grid at large at the retail rate that the utility sells electricity.

In 2014, Burlington Electric, the city of Burlington’s public utility, completed a 500 kW solar project at the city’s airport. With the help of that project, Burlington is now powered entirely by renewable energy.

The Alchemist, a brewery in Waterbury, began drawing all of its power from a nearby solar farm in November 2015.

In 2011, the Vermont National Guard completed a 1.5 MW solar project in South Burlington.

By the end of 2017, Bullrock Corp. announced plans to finish a 5.7 MW solar project on Grand Isle. The solar array would be used to supply Vermont locals clean energy.

In June 2017, the Rock Art Brewery from Morrisville was recognized for using only solar power in their operations. Rock Art Brewery is the first brewery in Vermont to run on solar energy alone.

In June 2017, Killington announced the construction of two solar projects. When the two solar arrays are complete, they are expected to produce 560 kWh of solar energy.

SolarFest is a music festival and solar energy conference held every year in Vermont.

The Renewable Energy Resource Center is a consumer-facing nonprofit group that helps installers figure out the best solar equipment for their needs.