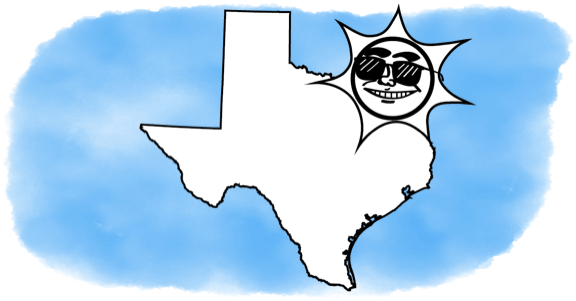 Going solar? Good call. It’s the right choice for your pocketbook and for the climate. If everyone in Texas used solar power, it would take 517 billion pounds of carbon out of the atmosphere every year—according to the EPA’s greenhouse gas calculator, that’s the equivalent of planting a forest that would cover all of the state.

Solar power should be a bigger part of the energy mix in Texas. Nationally, the state ranks #25 in solar energy use.

The biggest advantage of solar energy? The cost—$0. For the average Texas household, generating all their own electricity with solar would save $1,649/year. Also, you’re doing a favor for the next generation. Instead of relying on natural gas plants, supplied by fracking and offshore drilling, and CO2-spewing coal plants, which produce most of Texas’s electricity, you’ll be producing your own clean, renewable energy. In Texas, residential customers like you account for 13.3% of the state’s total energy consumption.

The disadvantages: The cost of installation. The average solar installation costs around $20,000. Incentives like the U.S. Residential Renewable Energy Tax Credit can bring the overall cost down, over time. Texas also makes solar equipment exempt from property tax.

The average Texas family uses 38,600 watts of energy on an average day. And, on average, they’ll get 5.5 hours of sweet Texas sun each day. So, to get enough energy to keep the power running all night, they’ll need their solar power array to generate 7,018 watts of energy per hour while the sun’s out.

To figure out exactly what you’d need based on where you live in Texas—and how much money you’d save—use this solar savings calculator:

Texas produces more energy than any other state. The Lone Star State is well known as the United States’ leading oil and fossil fuel producer—but it also has the US’s highest potential for renewables. Solar is a major component of Texas’s renewables capacity and potential, but it could be grow much faster if the state made renewables a priority. Energy economists predict that Texas solar might be on the verge of a small boom.

Texas had a modest renewable energy portfolio standard that it already surpassed, and does not require its utilities to offer their customers net metering, a financial incentive that credits solar generators for excess power they contribute to the grid. These policies are the most proven and most common ways to develop all kinds of renewables, and solar in particular. If Texas wants to become a leader in solar, it must move to implement these policies, like its peer state California has to great effect.

The largest solar array in Texas, Alamo 6, began construction near Bakersfield in 2015. The array will have a 110 MW generating capacity.

Toyota is moving its North American headquarters from California to Plano, TX; its new digs will have a 7.75 MW solar photovoltaic rooftop system. In July 2017, Toyota opened their new facility in Plano, which includes a 9 MW solar array. The solar panels are estimated to produce 33% of the facility’s energy needs.

EarthShare Texas is a group that coordinates environmental advocacy, including advocacy from and for the solar industry.