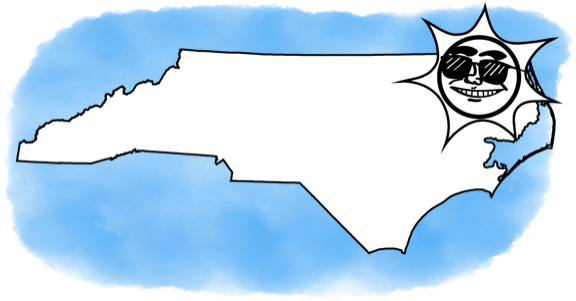 Going solar? Good call. It’s the right choice for your pocketbook and for the climate. If everyone in North Carolina used solar power, it would take 124 billion pounds of carbon out of the atmosphere every year—according to the EPA’s greenhouse gas calculator, that’s the equivalent of planting a forest that would cover all of the state.

Solar power is a growing part of the energy mix in North Carolina. Nationally, the state ranks #18 in solar energy use.

The biggest advantage of solar energy? The cost—$0. For the average North Carolina household, generating all their own electricity with solar would save $1,513/year. Also, you’re doing a favor for the next generation. Instead of relying on CO2-spewing coal plants and dangerous nuclear plants, which produce most of North Carolina’s electricity, you’ll be producing your own clean, renewable energy. In North Carolina, residential customers like you account for 28.3% of the state’s total energy consumption.

The disadvantages: The cost of installation. The average solar installation costs around $20,000. Incentives like the U.S. Residential Renewable Energy Tax Credit can bring the overall cost down, over time. By North Carolina law, solar power systems can’t be assessed at a higher property value than conventional systems, solar power equipment is exempt from 80% of property tax. In Asheville, you can get rebates on your building permit fees if you install renewable energy systems.

To figure out exactly what you’d need based on where you live in North Carolina—and how much money you’d save—use this solar savings calculator:

North Carolina is the South’s leading solar state and a model for other states’ solar development, but has mostly developed its solar capacity through utility-scale projects. North Carolina is working aggressively to produce more residential solar power.

North Carolina adopted a substantial renewable energy portfolio standard in 2007, which was the first in any Southern state. The standard mandates that 12.5% of private utilities’ power and 10% of co-ops and municipal utilities’ generation be produced from renewable sources, including solar. Solar is required to be at least 0.2% of North Carolina’s total solar generation by 2018.

Like most states, North Carolina requires that its utilities practice net metering. Net metering deducts solar energy that homeowners generate from the total cost of their utility bill and credits them for any excess power they send to the grid at large.

Furman University is installing a 743 kW solar farm on its campus in Greenville.

By the end of 2017, a 4 MW solar farm will be operating in Dillon County. The solar project is being done by Freedom Solar LLC.

In June 2017, a solar project in Cabarrus County was approved by the Board of Adjustments. The almost 75 MW solar facility will be made on a property just north of Midland.

In June 2017, a 30 MW solar project in Cumberland County was given approval by the North Carolina Utilities Commission. NTE Carolinas Solar will build the project.