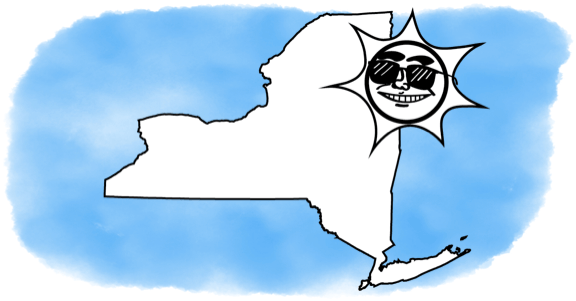 Going solar? Good call. It’s the right choice for your pocketbook and for the climate. If everyone in New York used solar power, it would take 76 billion pounds of carbon out of the atmosphere every year—according to the EPA’s greenhouse gas calculator, that’s the equivalent of planting a forest that would cover nearly all of the state.

Solar power is a growing part of the energy mix in New York. Nationally, the state ranks #16 in solar energy use.

The biggest advantage of solar energy? The cost—$0. For the average New York household, generating all their own electricity with solar would save $1,424/year. Also, you’re doing a favor for the next generation. Instead of relying on natural gas plants, supplied by fracking and offshore drilling, and dangerous nuclear plants, which produce most of New York’s electricity, you’ll be producing your own clean, renewable energy. In New York, residential customers like you account for 30.0% of the state’s total energy consumption.

The disadvantages: The cost of installation. The average solar installation costs around $20,000. Incentives like New York’s residential solar tax credit, which allows homeowners to deduct up to $5,000 to cover the cost of solar equipment, the NY-Sun Loan Program, which provides up to $25,000 in loans to homeowners, and the U.S. Residential Renewable Energy Tax Credit can bring the overall cost down.

The average New York family uses 19,700 watts of energy on an average day. And, on average, they’ll get 4.5 hours of sweet New York sun each day. So, to get enough energy to keep the power running all night, they’ll need their solar power array to generate 4,378 watts of energy per hour while the sun’s out.

To figure out exactly what you’d need based on where you live in New York—and how much money you’d save—use this solar savings calculator:

New York is moving aggressively to install substantial solar resources. Its NY-Sun program is a model for other solarization drives nationwide.

NY-Sun is a project that aims to install 3,000 MW of solar capacity in New York by 2023. NY-Sun includes incentive programs for businesses, schools, and government to install solar photovoltaic systems.

New York’s renewable energy portfolio standard is, like its peer state California, one of the most ambitious in the country: New York’s goal is to generate 50% of its energy from renewables by 2030. Reforming the Energy Vision (REV) is the implementation program for this goal.

Like most states, New York mandates that its utilities practice net metering. Net metering deducts energy private solar/renewable operators have generated from the total cost of their utility bill and credits those small operators for any excess power generation that goes to the grid at large.

Diamond Properties, a property management company, installed 10 MW of solar generation across its holdings in the Tri-State Area in 2016.

Cornell University installed solar panels on two university buildings in March 2016; the system will reduce the campus’s energy demand by 30%.

The Solar Impulse 2, a plane powered entirely by solar energy, completed the New York leg of its round the world flight in June 2016 with a flyby of the Statue of Liberty.

In October 2016, global reinsurance company Swiss Re announced that they’ve broken ground on the largest solar power installation in Westchester County. The 10-acre facility, housed on Swiss Re’s corporate campus, will contain more than 7,700 solar panels, and provide 60% of the power used by the company’s employees.

In May 2017, Cayuga Operating Company announced plans to build a 18 MW solar facility called Cayuga Solar. The plant will be built on the 434-acre Lansing site in New York.

In June 2017, Schenectady County announced the operation of a solar project in Niskayuna. The solar farm will be able to generate 792,480 kW of solar power.

In June 2017, the Town Board approved the construction of 12,000 solar panels. The solar array will be near Bedell Road on Grand Island.

Solarize NYC is a collaboration between New York City, the City University of New York, and the New York City Economic Development Corporation that promotes and offers incentives for solarization.

NY-Sun is the state program that promotes and administers its solar incentives program.

NYSEIA is the New York branch of the Solar Energy Industry Association, a trade group that promotes pro-solar policies nationwide.