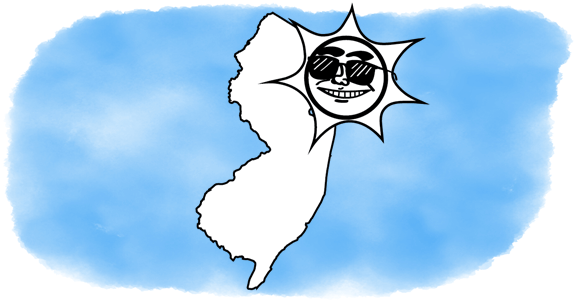 Going solar? Good call. It’s the right choice for your pocketbook and for the climate. If everyone in New Jersey used solar power, it would take 34 billion pounds of carbon out of the atmosphere every year—according to the EPA’s greenhouse gas calculator, that’s the equivalent of planting a forest that would cover an area more than twice the size of the state.

Solar power is a growing part of the energy mix in New Jersey. Nationally, the state ranks #5 in solar energy use.

The biggest advantage of solar energy? The cost—$0. For the average New Jersey household, generating all their own electricity with solar would save $1,268/year. Also, you’re doing a favor for the next generation. Instead of relying on natural gas plants, supplied by fracking and offshore drilling, and dangerous nuclear plants, which produce most of New Jersey’s electricity, you’ll be producing your own clean, renewable energy. In New Jersey, residential customers like you account for 26.1% of the state’s total energy consumption.

The disadvantages: The cost of installation. The average solar installation costs around $20,000. Incentives like New Jersey’s property tax exemption for solar systems and the U.S. Residential Renewable Energy Tax Credit can bring the overall cost down. Further, solar equipment is exempt from New Jersey sales tax.

The average New Jersey family uses 22,333 watts of energy on an average day. And, on average, they’ll get 7.5 hours of sweet New Jersey sun each day. So, to get enough energy to keep the power running all night, they’ll need their solar power array to generate 2,978 watts of energy per hour while the sun’s out.

To figure out exactly what you’d need based on where you live in New Jersey—and how much money you’d save—use this solar savings calculator:

New Jersey is an early adopter of solar and continues to aggressively expand its solar capacity.

New Jersey is deeply invested in solar capacity and has seen how well it works—in fact, the state requires all developers building new homes offer to install a solar energy system for their occupants.

Like most states, New Jersey mandates that its utilities practice net metering. Net metering deducts solar energy homeowners generate from their utility bill, and credits them for excess power they send to the grid for others to use.

PSEG, a New Jersey utility, completed installing a community solar farm on the site of a landfill in February 2016.

The Great Swamp Greenhouses, a nursery in Long Hill Township, finished construction on a 76.5 kW rooftop photovoltaic solar system in September 2016. The project will cut the Greenhouse’s energy imports by around 50%.

In May 2017, the completion of the Spartan solar project was announced. The solar farm is located in North Hanover Township and is expected to generate 13,700 MWh the first year.

In March 2017, KDC Solar Carlstadt LLC signed a 20-year lease to build a solar farm on hazardous land. The company plans to sell the energy in units of 2 million kWh a year.

In January 2017, South Hunterdon Regional High School announced that it was using a 1 MW solar farm to supply most of its energy needs.

The Mid-Atlantic Solar Energy Industries Association (MSEIA), operates a New Jersey division. The SEIA, of which MSIEA is a local chapter, is the US solar industry’s policy advocate and lobby group and works on federal, state, and local levels.

Environment New Jersey and the New Jersey Chapter of the Sierra Club both advocate for small-scale, residential solar and advancing the state’s renewable energy standard.

The Hopewell Project educates the public about home energy efficiency and generation. The group’s signature project is one of the first net zero homes in the nation, located in Hopewell, NJ.