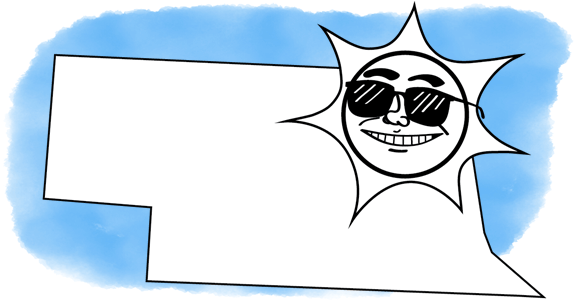 Going solar? Good call. It’s the right choice for your pocketbook and for the climate. If everyone in Nebraska used solar power, it would take 56 billion pounds of carbon out of the atmosphere every year—according to the EPA’s greenhouse gas calculator, that’s the equivalent of planting a forest that would cover nearly half of the state.

Solar power is a growing part of the energy mix in Nebraska. Nationally, the state ranks #37 in solar energy use.

The biggest advantage of solar energy? The cost—$0. For the average Nebraska household, generating all their own electricity with solar would save $1,276/year. Also, you’re doing a favor for the next generation. Instead of relying on CO2-spewing coal plants, which produce most of Nebraska’s electricity, you’ll be producing your own clean, renewable energy. In Nebraska, residential customers like you account for 18.9% of the state’s total energy consumption.

The disadvantages: The cost of installation. The average solar installation costs around $20,000. Incentives like the U.S. Residential Renewable Energy Tax Credit can bring the overall cost down, over time. Nebraska municipalities may soon start to offer low-interest financing for solar projects under the recently passed Property-Assessed Clean Energy Financing law.

The average Nebraska family uses 34,067 watts of energy on an average day. And, on average, they’ll get 4 hours of sweet Nebraska sun each day. So, to get enough energy to keep the power running all night, they’ll need their solar power array to generate 8,517 watts of energy per hour while the sun’s out.

To figure out exactly what you’d need based on where you live in Nebraska—and how much money you’d save—use this solar savings calculator:

Nebraska ranks low in solar capacity as a result of its lack of non-ethanol renewable energy policy, but it could perform highly if the policy situation improves. Local solar companies have helped to drive what the Omaha World-Herald calls a “mini-boom” of solar development in the state. In 2016, solar capacity increased sixfold.

Nebraska does not have much in the way of pro-renewable policy. It does not have a renewable energy portfolio standard. However, the state does have modest loans and tax breaks for renewable projects. The state also mandates net metering from its utilities.

A family in Lindsay set up a 25 kW solar project on their farm.

Messner Development in Central City has installed solar gardens in that city, and as of September 2016 is working on gardens in Venagno and Scottsbluff. In June 2017, a 5.8 MW solar project began construction in Kearney. The project is expected to provide 5% of the city’s energy needs.

In early 2017, South Sioux City opened a 2.3 MW solar park south of the city. The park expects to add battery storage to the facility by 2027.

In July 2017, multiple organizations came together to propose the installation of solar panels along the Keystone Pipeline in Nebraska. The project, named “Solar XL,” would help supply energy to farms in danger of eminent domain by TransCanada.

Nebraskans for Solar promotes solar and advocates for pro-solar policies on a state level.

The Nebraska Wind and Solar Conference meets annually to allow the nascent solar industry and advocacy community to plan for the upcoming year.

The Nebraska Solar Energy Society, located at the University of Nebraska, educates the public on solar technology.